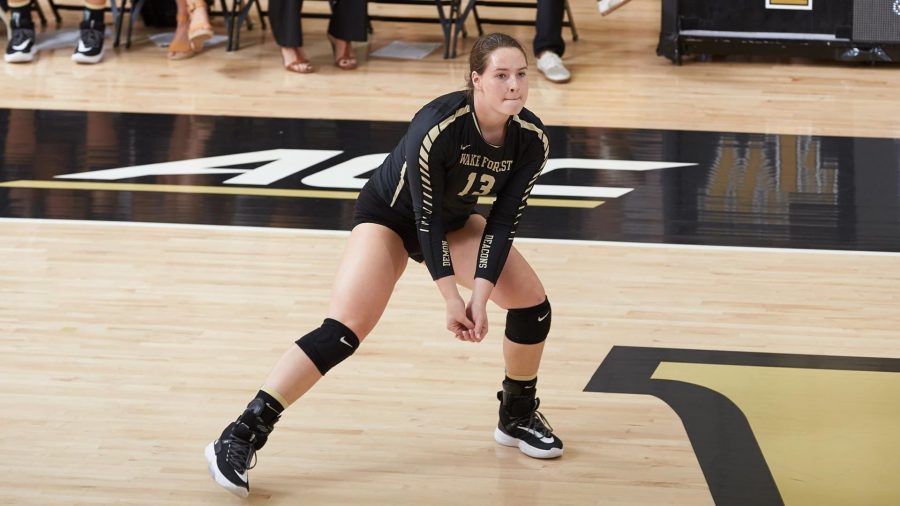 Wake Forest volleyball 11-6 (1-5) entered the past weekend on a 1-3 skid since beginning conference play, with their only victory coming against Syracuse on Oct. 4. Two tough opponents in Notre Dame 13-3 (6-0) and No. 23 Louisville 13-3 (6-0) came to town and both walked away with convincing victories.

The Fighting Irish came into Friday night’s match on a four-game win streak, all coming against ACC opponents. They finished the match with their fifth consecutive victory by a score of 29-27, 20-25, 25-20, 25-22.

An incredibly close first set kicked off the action, as neither team held a lead larger than three points. The Demon Deacons and the Fighting Irish battled all the way to a score of 27-27 before a Wake Forest service error and a kill by sophomore outside hitter Charley Niego secured the set 29-27 for Notre Dame.

The Deacs then posted the match’s most dominant single-set performance, tallying 13 kills against only two errors for a 47.8% hit rate and a 25-20 victory.

The Fighting Irish regained momentum by jumping out to a 5-1 lead in the third set and never looked back as they cruised to a 25-20 win. Wake Forest’s match-high 10 errors ultimately were too much to overcome in the set.

Wake Forest recorded an incredible 18 kills in the final set, led by seven kills from redshirt sophomore middle blocker Jaclyn Childress, but also made eight errors. Meanwhile, Notre Dame played a more efficient set with 12 kills against only three errors. The clashing approaches led to a stalemate for the better part of the set, as the teams played evenly to a 21-21 score before Notre Dame went on a 4-1 run to secure the set 25-22.

The Deacons were not able to hang as tough with the nationally ranked Cardinals on Sunday afternoon, as Louisville rolled to a clean three-set sweep. This outcome was not all that surprising considering Louisville had swept its three previous opponents as well.

Louisville stepped it up a notch in the final two sets, posting a dominant 37.7% hit rate with 28 kills against five errors. Della had another strong showing Sunday, recording 12 kills. Freshman outside hitter Aiko Jones paced the Cardinals with 11 kills, while freshman middle blocker Amaya Tillman had six blocks at the net.

Wake Forest will have a chance to right themselves this upcoming weekend, as they play two teams with worse overall records. First, the Demon Deacons will travel to Atlanta to face off against Georgia Tech 10-7 (3-3) Friday night at 7:00 p.m. Then on Sunday, the Deacs will head north to play Clemson 7-10 (1-5) on Sunday at 1:00 p.m.