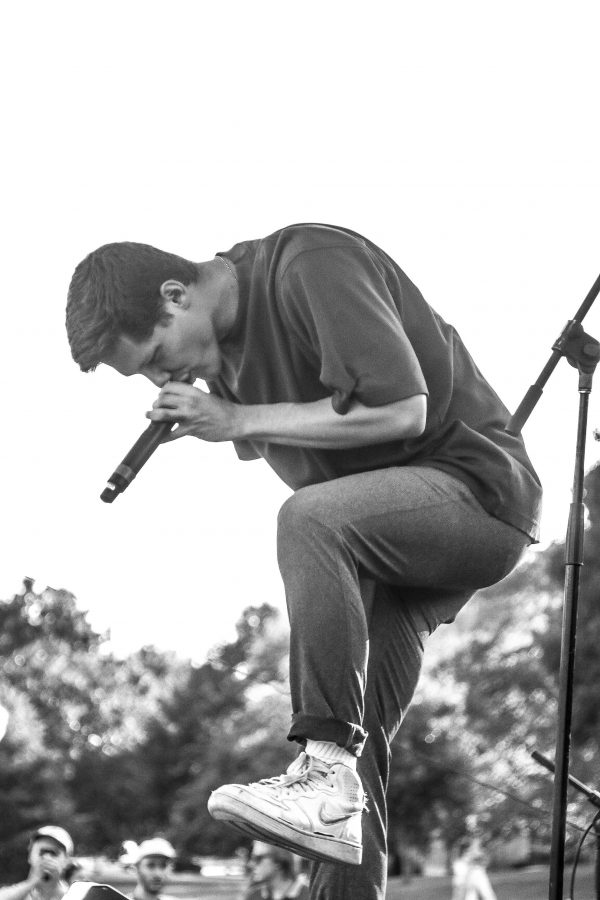 Coleman Greene is a senior at Wake Forest from Richmond, Va. He is a philosophy major and is heavily involved with Reformed University Fellowship (RUF) by leading music at their weekly worship.

On the side, Greene is a member of a hip-hop group called Fordson Labs with a few students from Virginia Tech. They are currently on Spotify and Apple Music.

What is RUF and how are you involved with them?

RUF is the campus ministry here at Wake Forest. The way we see ourselves is as a place on campus for students to find community, be empowered to change and love the school. I lead music at RUF. We have worship and we sing songs every week. Being a worship leader is my favorite part. RUF is a little different than other clubs in that there’s no membership; we have between 150 and 200 people who will come to our doors. Everyone is welcome.

What kind of music do you play in RUF?

We want the music that we play to be accessible for all people. There are some songs that are more folksy and some that are more gospel-y. It’s all worship music: speaking about God. We tried some crazy stuff, like some Chance the Rapper interpretations — I think we did “How Great is Our God.”

What’s your other band called?

The name of the band is Fordson Labs, and we call ourselves a hip-hop collective. It’s me and another guy from Virginia Tech. We started making music our junior year of high school, and it has taken off since then. Our band is comprised of other people from Virginia Tech as well, and we’ve played shows there and at Wake Forest and elsewhere in the southeast. The last show we did here was Hydrate for Humanitate during the spring of my sophomore year.

What kind of music do you perform?

I’m a better singer than rapper. We try to go for a kind of Chance-the-Rapper singing style of rap, by adding melody to tight lyrics. We have no idea how to describe our sound, so we just call it organic hip-hop. It’s inspired by jazz and guys like Dave Matthews, as well as stuff from the hymn background I have.

Can you describe the feeling of going onstage?

Yeah, it’s similar to an athlete preparing for a game. I have to memorize a lot of lyrics, but I do it subconsciously, the way an athlete doesn’t think about pitching or hitting or their jump shot. As long as I’m prepared, it’s kinda just “go” mode. I love recording, and I love performing, and I would say doing it with a band is exciting because you get to do it together. I still get adrenaline from going out on a dark stage and watching it light up. It’s exciting.

Have you ever considered combining Christianity with rapping? Why or why not?

The way I think about my life as a Christian is that, whatever I do, I hope to glorify God with it. With this music, that’s what comes out. I hope to be inspired by God, like Chance the Rapper or Jon Bellion. My faith does play in the things I talk about in lyrics. I think a big part of it is the vulnerability that comes out in my music. It’s like a theme in the hymns we sing in RUF as well — this need that we have for someone to come save us. Some of my songs are darker and some are more hopeful, but they all are part of a bigger story that I like to present with my music.

So would you say that performing music is a spiritual experience?

Yeah, when you have a platform to tell people things it’s really special, and you should use your words wisely. I think my vulnerability can hopefully encourage people; I talk about things that I have struggled with and that I hope people can identify with. Really, I think everybody is creative; they just often don’t know that they are. To take advantage of that is really an amazing thing.