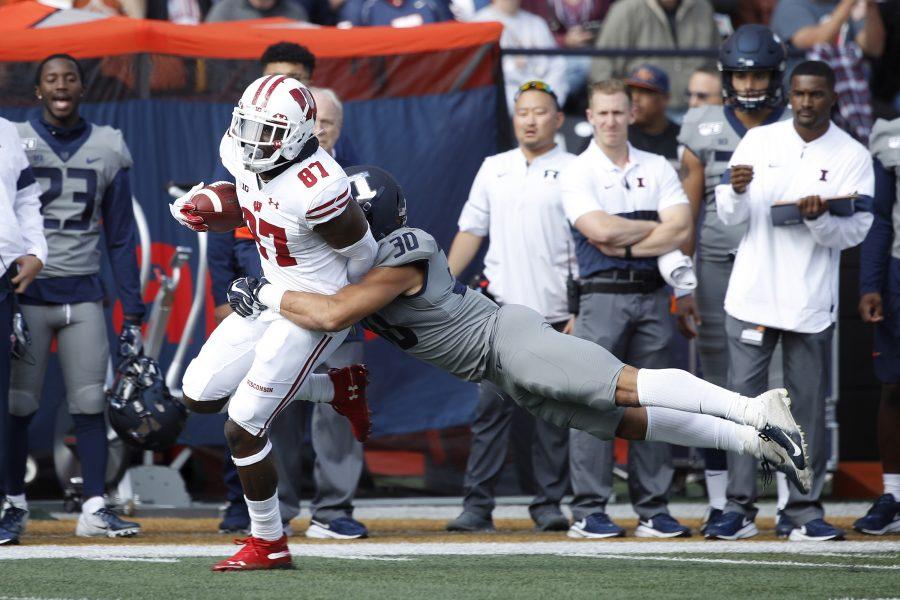 Quintez Cephus #87 of the Wisconsin Badgers runs after catching a pass for a first down against Sydney Brown #30 of the Illinois Fighting Illini in the first half of the game at Memorial Stadium on October 19, 2019 in Champaign, Ill. (Joe Robbins/Getty Images/TNS)

The No. 6 Wisconsin Badgers (6-1) traveled to Illinois (3-4) to take on the Fighting Illini Saturday afternoon in what should have been a simple tune-up before their marquee matchup with Ohio State next Saturday. Illinois had something else in mind. The Badgers rocketed out of the starting gates, opening up a 10-0 lead before the Fighting Illini began to throw some punches of their own. After falling behind 20-7 early in the third quarter, Illinois running back Reggie Corbin ripped off a 43-yard touchdown scamper that turned the tide once and for all. The Badger offense sputtered the rest of the way, scoring only three points during the last 25 minutes of gameplay. Illinois clawed their way back to just a two-point deficit late in the fourth, setting the stage for kicker James McCourt on the game’s final drive. He delivered, nailing a 39-yarder as the clock struck zero. Illini quarterback Brandon Peters threw for a pair of touchdowns in the victory, while Corbin churned out 83 yards and a crucial touchdown on the ground. With this loss, Wisconsin’s hopes of a perfect regular season campaign are dashed, and their place among college football’s serious playoff contenders is jeopardized.

The No. 12 Oregon Ducks (6-1) made a quick voyage up the coast on Saturday to face their divisional contenders, the No. 25 Washington Huskies (5-3). In a contest that seesawed back and forth throughout all four quarters, Oregon mounted an impressive come-from-behind effort to steal a crucial road victory. Oregon fell behind 28-14 early in the second half before the Ducks offense began lighting up the scoreboard, overwhelming the Husky defense with a 21-3 scoring run to end the game. NFL prospect Justin Herbert lived up to the hype for the Ducks, airing it out for four touchdowns and 280 yards through the air. Receiver Jaylon Redd impressed as well, hauling in two crucial touchdown grabs in the victory. In the wake of this defeat, Washington falls to the middle of the pack in the Pac-12 North, while Oregon cements its place atop the division.

No. 13 Utah Utes (6-1) welcomed No. 17 Arizona State (5-2) Saturday in a crucial Pac-12 South battle. The Utah defense stifled the Sun Devils from the get-go, maintaining a shutout until midway through the third quarter and surrendering only three points in a pivotal performance. Arizona quarterback Jayden Daniels performed underwhelmingly, completing only four passes for 25 yards and an interception. Meanwhile, the Ute offense gashed the Sun Devils on the ground, with senior running back Zack Moss breaking off 99 yards and a pair of touchdowns, a performance that etched his name in the history books as Utah’s all-time leading rusher. With the win, Utah continues its strong start to conference play, while Arizona State drops seven spots to No. 24 in this week’s AP poll.

No. 7 Penn State (7-0) hosted a struggling Michigan (5-2) squad in Happy Valley on Saturday evening. This contest marked the Nittany Lions’ annual white-out game, in which Penn State enthusiasts show up to the stadium clad from head-to-toe in white apparel, creating one of the most hostile environments college football has to offer. The moment proved too big for the visiting Wolverines, as they fell short on the road in an impactful Big Ten matchup. Wolverine quarterback Shea Patterson was held without a touchdown in the loss, while Nittany Lion signal-caller Sean Clifford stuffed the stat sheet, finding the end zone thrice through the air and once on the ground. Penn State continues their systematic dominance in the Big Ten, while Jim Harbaugh’s crew is once again sent back to the drawing board, searching for answers.

The red-hot Buckeyes welcome the Badgers to the Horseshoe, providing a potential preview of the Big Ten Championship game in Indianapolis later this year. Ohio State quarterback Justin Fields looks to continue his electric start to the season, while Wisconsin will surely be out for blood after suffering a devastating loss to Illinois the previous week.

LSU is faced with another talented SEC opponent at home, marking their second top-10 matchup in the past three weeks. All eyes will be on Death Valley this weekend as dynamic quarterbacks Joe Burrow and Bo Nix face off in a battle for SEC bragging rights.