Cover Three: Cowboys Are Back In NFC Playoff Hunt 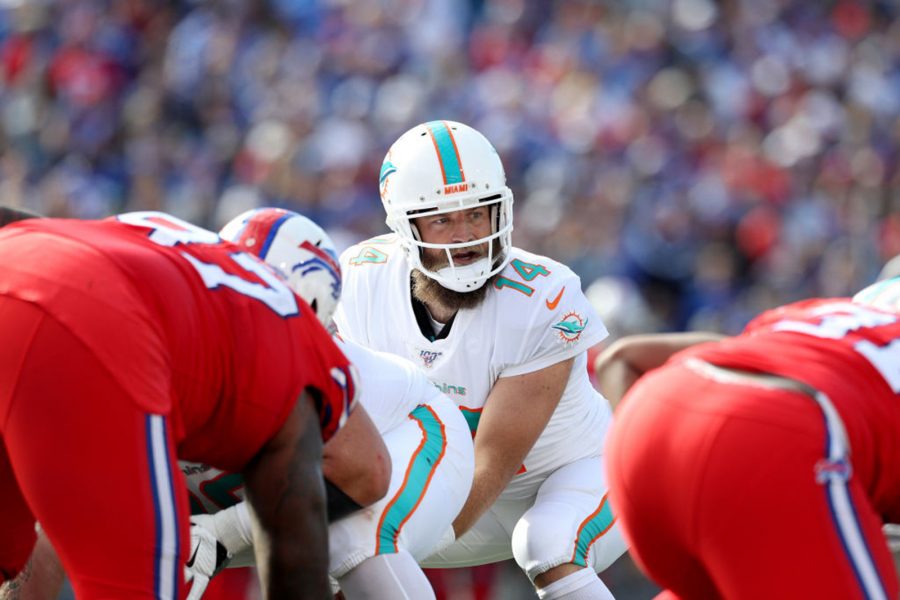 Ryan Fitzpatrick #14 of the Miami Dolphins looks to his left during the third quarter of an NFL game against the Buffalo Bills at New Era Field on October 20, 2019 in Orchard Park, New York. (Bryan M. Bennett/Getty Images/TNS)

Whether it was the clear skies of Buffalo or the downpours in D.C., weather conditions were fairly representative of playoff races in Week 7. The slate of games provided clarity to some divisional races and muddled up some others. Quarterback situations were volatile this week as well, with Patrick Mahomes going down for multiple weeks with an injury and the Titans pulling the plug on Marcus Mariota. Week 8 may see some more stability as Drew Brees could return from the thumb injury he suffered earlier this year.

For a team that is allegedly tanking this season, anyone who watched this game knows that the Dolphins put up a significant fight in this one. If they’re tanking, they better be careful because they are bound to win a game if they keep playing like they did Sunday. On the other sideline, the Bills were able to play through a lackluster first half performance on offense to win. Josh Allen showed that he is a more than capable runner but still has lots of room to improve passing the ball. The rare onside kick return for a touchdown finished this one off, but the Dolphins were able to hang around until late in the game. The Dolphins will build from this, and I strongly believe they will secure a divisional win this season.

If we had known prior to this week that Lamar Jackson would only score one touchdown on the day, it is likely that more bets would have been placed on the Seahawks. The Ravens defense played outstandingly well against Seattle, with their two touchdowns being the difference in the game. Jackson was able to make enough plays with his legs to move the ball, while MVP candidate Russel Wilson did not keep pace with the high expectations he’s set for himself. Even with that, both of these teams look like competitors for deep playoff runs.

Turnovers, third-down conversions, special teams. The box score difference was not enough for a 27-point win by the Cowboys. The Cowboys clinched the winning moments in this game, creating a further separation. Both looking for separation in the division, this game was a critical win for the Cowboys. They were able to keep the Eagles at arm’s length, and landed the knockout punch when it was needed. Whether or not either of these teams are legitimate threats is yet to be known, but if Dak and Zeke play consistently and Brett Maher keeps hitting 60+ yard field goals, they can play with anybody.

Since only scoring 6 against the Bears in September, the Vikings offense has hit full stride. Kirk Cousins has shown what the Vikings administration thought they saw when they offered him a guaranteed $84 million. Dalvin Cook just keeps putting the ball in the end zone, and the more he can run the ball, the better rested the talented defense can be. The Redskins lost again in Week 7, bringing their record to 1-6 with the lone win over the lowly Dolphins. The Redskins have hung in there with multiple good teams this year, putting up 20+ twice and 15 against the incredible Bears defense. The Redskins are hungry. I expect the ‘Skins defensive line to hurry Cousins, Adrian Peterson to outrush Dalvin Cook, and Minnesota to give Washington their second win of the year in a close game.

The Titans are feeling energized after Ryan Tannehill was able to lead the team to a win in his first start of the year against the Chargers. Corey Davis made big catches that have seemed to evade him this year, and the defensive line greatly benefited from Jeffery Simmons’s debut. Surprisingly, the Titans find themselves squarely in the middle of a tight playoff race in the AFC South. The Bucs have stumbled through two losses since their surprising 55-40 win over the Rams. With added pressure from the Simmons-fortified front seven of the Titans, Jameis Winston will have to avoid turnovers that have been a constant through his career. Malcolm Butler and co. will be ready to win the game for the Titans if he can’t.

Many theories surfaced when Patrick Mahomes went down last week, from the Chiefs trading for new backup Marcus Mariota, to signing free agent Colin Kaepernick. In the end, Andy Reid decided to stick with the safe backup who already knows the KC offense, Matt Moore. Moore has quite the task ahead, trying to keep up with a refreshed-looking Aaron Rodgers. The Packers defense has not looked exceptional, but they haven’t had to with the offense performing as well as they have. The Chiefs defensive front will have to pressure Rodgers for the Chiefs to have a chance in this battle of division leaders.