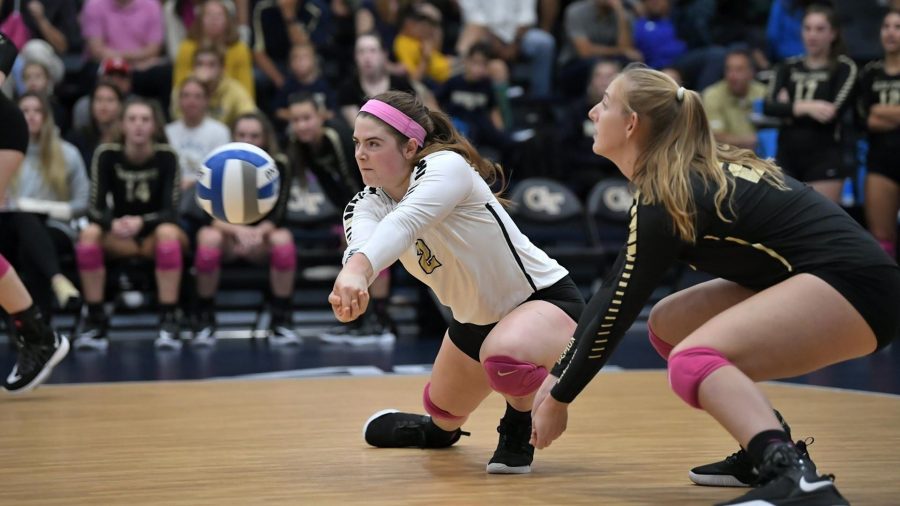 Wake Forest women’s volleyball 11-8 (1-7) continued to falter in ACC play this past weekend, losing six consecutive sets to Georgia Tech 12-7 (5-3) and Clemson 9-10 (3-5). The losing streak now stands at five matches and seven out of the last eight. The Deacons have tumbled down the ACC rankings after ranking second one month ago.

Friday’s match pitted the Deacons against the Yellow Jackets, who entered the match with consecutive victories over Clemson and Virginia Tech 8-13 (1-7). A dominant 25-10, 25-13, 25-14 continued this streak for Georgia Tech.

The Yellow Jackets jumped out to a huge 15-5 lead to set the tone for the match, and closed out the first set with a 25-10 victory. Georgia Tech played immaculate volleyball from the outset, recording 13 kills against only one error for a 48.0 hitting percentage in the first set. The Deacons posted six kills of their own against eight errors for a -0.07 hitting percentage.

Georgia Tech continued an all-out assault in the second set, as they stormed out of the gate to a 6-0 lead thanks to kills from three separate players. Wake Forest fought back to a four-point margin at 10-6, but the Yellow Jackets proceeded to go on a 15-7 run to close out game two 25-13.

The Deacons fought again initially in the third set, as the Yellow Jackets held another four point lead at 14-10. Georgia Tech then left Wake Forest in the dust again, piling on an 11-4 run on the strength of nine kills. For the match, the Yellow Jackets put up 47 kills against only nine errors, while the Deacons managed 19 kills against 16 errors.

Sunday’s match saw more of the same from the Deacons, as Clemson completed a 3-0 sweep by a score of 25-16, 25-14, 25-22. The Tigers dominated the first two sets, tallying 28 kills against only eight errors while forcing the Deacons to commit 15 errors against 11 kills.

The third set was far more competitive, as the teams battled back and forth the whole way through. Clemson held a small lead all set, only once by more than four points. Wake Forest found themselves down only two points at 23-21, but two kills from sophomore outside hitter Ashtynne Alberts sealed the deal for a 25-22 set victory.

The Deacons’ valiant effort in the third set can be largely attributed to cutting down on costly mistakes, as the Deacons committed only one error against 11 kills for a 38.5 hitting percentage. The Tigers were right behind them however, recording a match-high 16 kills against five errors for a 33.3 hitting percentage.

Wake Forest has an excellent chance to end this losing streak this week, as they play two squads tied for the worst record in the ACC. First, the Deacons will face Duke 8-13 (1-7) in Durham on Wednesday night before returning home to face Virginia Tech 8-13 (1-7) on Sunday.