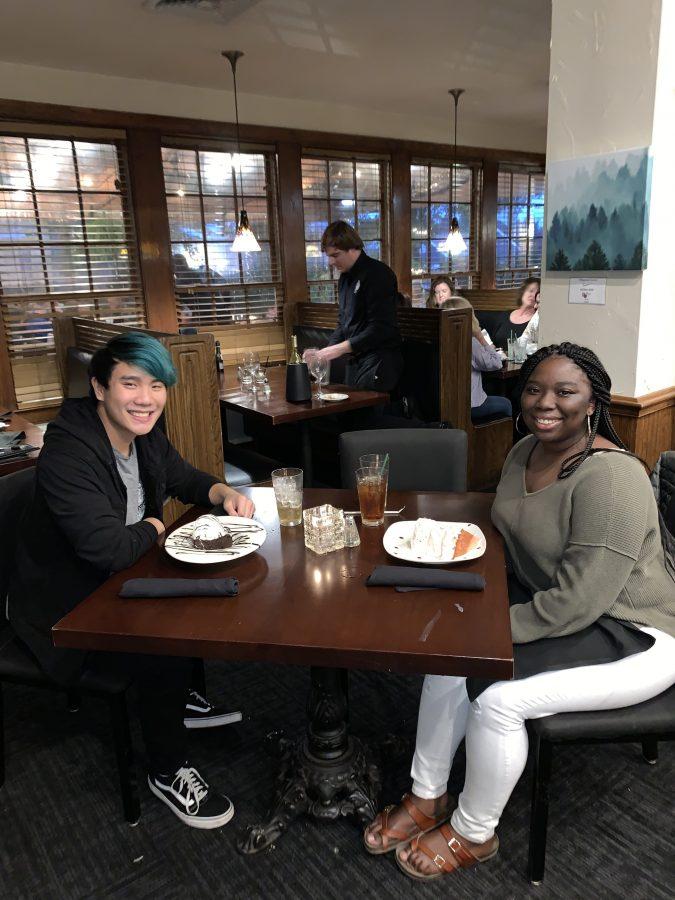 This fall, the Editorial Board of the Old Gold & Black has once again put down our editing pens and picked up Cupid bows. Our reprise of Deacon Dates promised to sponsor a special date in downtown Winston-Salem for two lucky Demon Deacons selected by our staff, who moonlight as expert romantic consultants. Almost thirty students submitted applications, answering questions about their ideal romantic partners, dream first dates and favorite memes. We chose to set up freshmen Collin Cheung and Zariyah Cope, sending them to the Old Fourth Street Filling Station on Oct. 15.

Collin Cheung: Well, for a romantic partner, I guess I’m looking for someone who’s sweet and fun to be around without being overwhelming. With Deacon Dates I was just looking for a good time and to enjoy the experience.

Zariyah Cope: I was mainly looking for someone who is kind of goofy, because I’m goofy, and someone who doesn’t mind being lazy as well, because I like being lazy. Just overall, I guess, someone funny and humorous. I mainly [signed up for Deacon Dates] because my friends were pushing me to do it, because they all knew I had never been on a date before, and they said, “You should do it!” and I said, “Okay!” I was a little nervous, but I did it anyway.

AW: How did you feel leading up to the date? Were you nervous or excited?

CC: I was excited, but not overwhelmingly excited.

ZC: I was definitely nervous just because I had no idea who the person could be. My mind was just thinking about so many scenarios as to what could happen. I expected it to be a bit awkward, mainly because I can be awkward, but when I did get there, it wasn’t that awkward because we just talked the entire time, so it wasn’t that bad.

AW: What were your first impressions?

CC: We had met at Playfair actually [during first-year orientation], but we didn’t know each other. I don’t really know what my first impressions were, but it was nice; it was a “that makes sense” kind of thing. We were like, “Oh, I recognize you,” because we had met before.

ZC: I met him at orientation during Playfair, so I remembered him from there. I originally had a brief conversation with him there because we found out we had the same birthday month [in an activity at Playfair], so that’s how I did talk to him at that time. He was also at a karaoke night. I don’t know if he remembers, but I was at a karaoke night and he performed. I remember that pretty well.

AW: Do you feel like you connected and had a good conversation?

CC: Yeah, we had good conversations about regular school year stuff and Halloween coming up and movies and interests and things like that.

ZC: I felt comfortable because he seemed like a really nice person and was willing to listen to whatever I had to say, so that was nice. We definitely had a good conversation — it was funny, though, because there were a lot of things that we were sort of opposite on. He loves scary movies and I can’t do it. Music choices, I like to nap, he likes hiking, so that was funny to me, but we did have a good conversation.

One interesting fact that I did find out about him is that he knows how to perform magic, and he did perform a magic trick while we were there. He already knew my birthday, so he put that in, and he asked me for my favorite number and then divided by something and then he took his phone case off and there was an index card in there and I opened it and it had the exact number. I don’t know how that works, but that was cool.

AW: How were the other elements of the date — the food, the restaurant, the atmosphere?

CC: The food was good, the atmosphere was good. The restaurant was very nice — the decorations of the restaurant were nice to look at … Dessert was great. I got the fudge brownie, and she had the strawberry cake. The cake was massive. It was a giant cake.

ZC: It was definitely nice. The menu was very fancy and it took me like 20 minutes to decide what I wanted to eat. I had grilled chicken with pico de gallo, cheese, candied bacon and some type of special sauce and then mashed red potatoes and seasonal vegetables, and that was good. He had some type of salmon salad and then filet mignon, I believe, for his main dish, and we both got dessert as well, and that was good.

AW: What did you do after you came back from dinner, at the end of the date?

CC: We dropped her off at her dorm and I went to the football game.

ZC: At the end of the date, we agreed to Lyft back together and we continued to talk about a bunch of random things. He invited me to an event that he’s hosting on campus, the “Why Do We Poet” thing or something at Shorty’s, where people perform different poems from different backgrounds.

AW: Does this give you more of an idea of what you might be looking for in a dating partner?

CC: More comfortability in talking … someone it’s easy to flow a conversation with and in general have shared interests.

ZC: It made me feel more easy about dating because I literally did just go out to eat and have a conversation with someone. I’m glad that I had that experience.