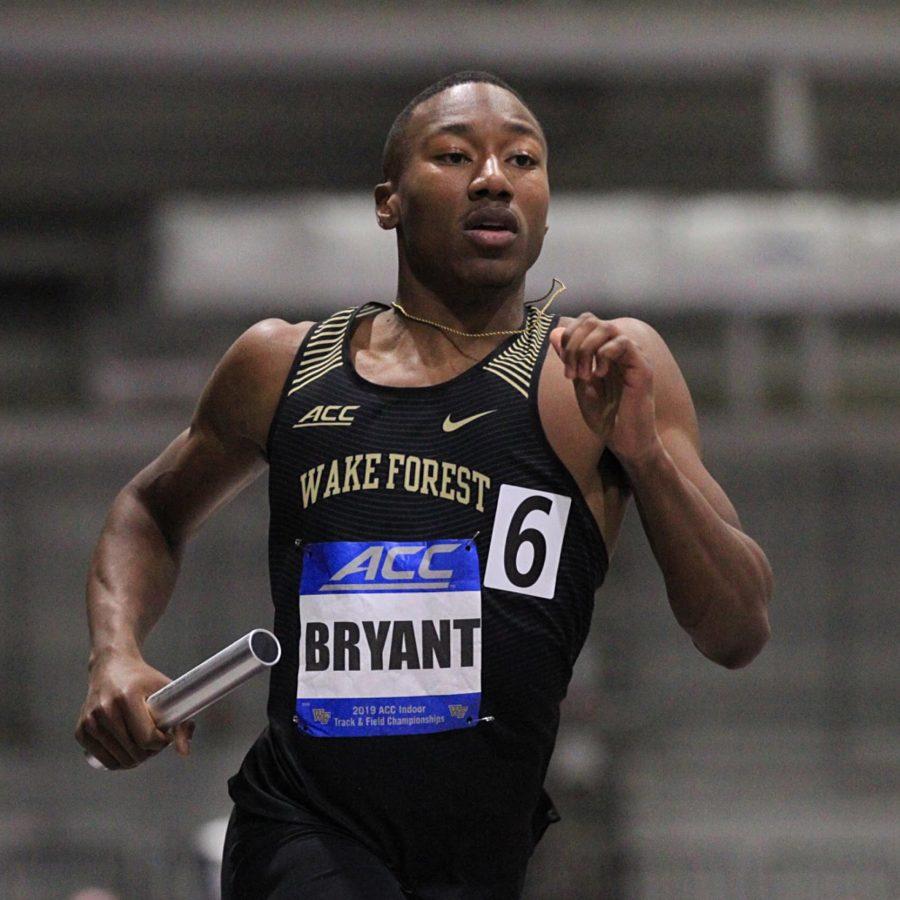 Hailing from Lake Oconee, Ga., Kaleb Bryant knew early on he wanted to attend Wake Forest University. The familiar feel of a small school with the opportunity to develop one-on-one interactions with faculty and other students appealed instantly to Bryant. He visited Wake Forest for the first time as a junior at Athens Academy, a school with a similarly small student body. The transition made sense and a few months after another visit to Mother So Dear, Bryant committed to the Wake Forest track & field team in 2016. Bryant’s time at Wake Forest is one that can be defined by his contributions on and off the track. He finished third with a 50.66s time in the 400m at the 2019 Dick Taylor Carolina Cup. He was also elected to be a vice-president of the Student-Athlete Advisory Committee (SAAC) in 2019. As a member of SAAC, Bryant helped implement the Forest Fridays initiative, aimed at improving interactions between students and student-athletes outside of the classroom, with its next event planned for Oct. 25 at Poteat. Bryant looks back at initiatives like Forest Fridays as part of the legacy he wants to leave behind after he graduates next semester.

Rafael Lima: How did you get involved with SAAC?

Kaleb Bryant: A lot of my close friends were on SAAC. I always wanted to do something where I could make a bigger impact, not only on student-athletes, but on people on campus in general; and make [Wake Forest] as great as it has been for me, to everybody else as well. So, I’m one of the co-vice presidents with Nick [Dominic Peters].

RL: On top of being a co-vice president, you’re also responsible for the outreach sub-committee. What motivated you to get involved with outreach?

KB: I wanted to make change and that happened to do with the outreach group and whatnot.

You know, it’s one of those things where you want to be able to make this place as great as possible for everybody and make actual change that can last. Forest Fridays, you and I talked about this a few weeks ago, is something that’s not going to go away anytime soon. That’s something that can transcend for decades into the future.

RL: Moving to your personal experience here at Wake Forest, what were some of your best memories on campus over the past three years?

KB: That’s a loaded question! Laughs. Oh, when I got my independent study cleared. That was cool. My independent study right now is in the film studies department with Professor [Woodrow] Hood. So, I go through Disney animated classics on a weekly basis. Right now, I’m in the Disney renaissance. I started with classics like Snow White, Pinocchio and I worked my way up to The Lion King and Aladdin this week. [Disney animated classics are] a big passion of mine. My favorite Disney movie is Peter Pan because it teaches you about maturity and how to view life from a different perspective.

That’s what I love about Wake [Forest]. It’s small enough that it allows you to go through … and do something about your passions. The Peter Brunette Film Studies Scholarship was awarded [to me]. I was only one of two students on campus to receive that scholarship. It was a blessing.

Another big moment of mine was … I actually went to the ACC Championships two weeks after having pneumonia my freshman year. It was a challenge at first, but it was one of those things that once you lock in [you can do it]. We were at Georgia Tech in Atlanta. Since I’m from Georgia, it was one of those things where I got to go home, see my family for the first time in a while and compete with my teammates. And we did it.

RL: Wow, you had a lot of different experiences during your time here. What do you think will be the main legacy you will leave from your four years at Wake Forest?

KB: I want to leave the idea that it’s okay to care. It’s okay to be who you are on campus, it’s okay to branch out and get out of your comfort zone. Some of my favorite times [in college] have been with people that aren’t even on sports teams. A lot of people that are student-athletes don’t ever get that [experience], just because, and I understand, we have these really busy schedules. But, when you’re able to get out of that, open your mind and be part of the greater Wake Forest community, it’s just awesome. You can just create a better community overall for everybody and the whole stigmatization of groups on campus goes away. That’s the type of legacy I want to make.