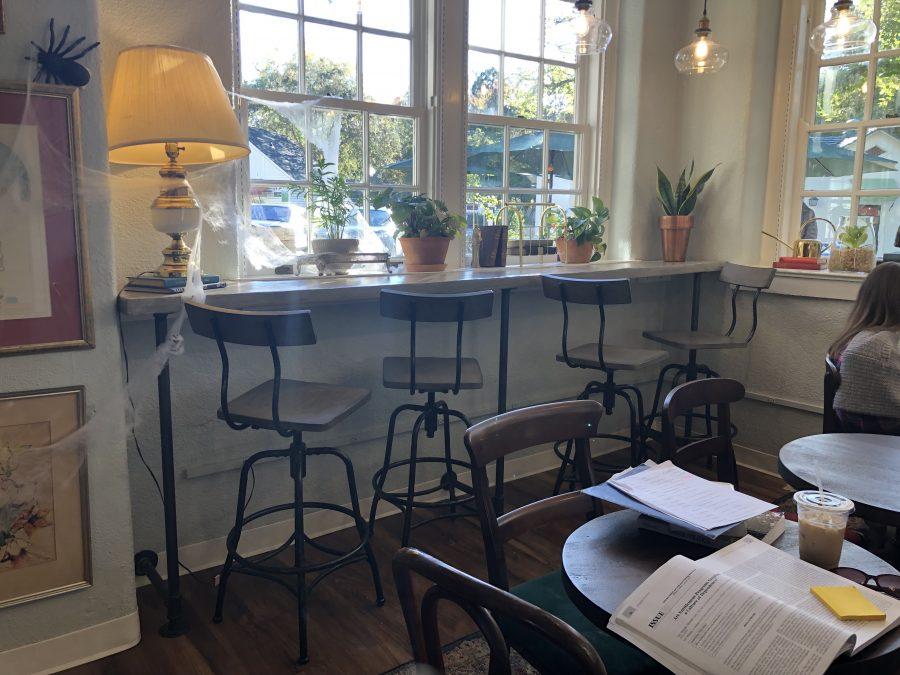 For those who don’t know me, I love coffee (especially espresso), and so when I heard a coffee shop was opening up in Reynolda Village, I was ecstatic. I saw the “Dough Joe’s Doughnuts & Coffee coming soon” sign at the end of last semester and started counting down the days until it opened.

Dough Joe’s opened in Reynolda Village on Sept. 18; however, the doughnut shop originated as a food truck. The founders of the food truck, Eric Disch and Anna Margaret Roth, are both Wake Forest alumni with a love for food. In 2017, they opened Dough Joe’s Doughnuts & Coffee to fill Winston-Salem’s need for a local doughnut shop. The Reynolda Village location was the shop’s first major expansion.

The shop is open from 7 a.m. to 11 p.m. Monday through Thursday, 7 a.m. to 12 a.m. on Fridays, and over the weekend, they open at 8 a.m. However, there’s one catch: the kitchen closes at 5 p.m. every day. This means fresh doughnuts are no longer made after this time, and the only food available is what is in the bakery display and ice cream.

There are two main rooms and an outside patio area. The first main room houses several seating options, the coffee bar and a huge mirror by the cream and sugar station. The back room features a dining room table, a line of bar stools and a couple of smaller round tables.

Dough Joe’s offers a wide variety of coffee, doughnuts, ice cream and baked goods. In terms of coffee, they offer a range of both seasonal beverages and typical coffee shop drinks. Their seasonal beverages include the Sleepy Hollow drink, which is chamomile tea, vanilla and steamed milk, and Poison Apple Cider, which consists of spiced cider and cinnamon.

Like many coffee shops, Dough Joe’s offers several flavor add-ins and milk alternatives. However, to my surprise, the shop does not offer almond milk as an alternative. They do offer oat milk, which I’ve found to be quite tasty, but I was taken aback when I didn’t see the popular almond milk on the menu.

Most menu items are priced a little bit on the higher side, and they offer three sizes for both hot and cold drinks. However, there are a few exceptions. A medium (16 oz.) hot latte is $4.50, adding a flavor syrup costs an additional $0.75 and oat milk adds yet another $0.75. Coffee and a food item can definitely start to get pricey, but the overall location, atmosphere and quality make it worth it.

When I first entered Dough Joe’s, the ambiance really hit me. It felt homey and warm; there were tons of seats despite the small space and sunlight filtered through the windows. The environment really sticks with me; every inch of the shop is decorated in some way, and comfort seemed to be a huge priority.

The first time I went to Dough Joe’s, the kitchen was already closed, so I tried their coffee. I purchased an iced vanilla latte, which I know is fairly basic, but I like it. I thought the quality was pretty good; however, I prefer my coffee to be on the sweeter side, and it definitely was leaning more toward the bitter side of the spectrum. All in all, it was a little pricey for what I ordered, but I feel like it was worth it.

When I went back for the second time, I bought another iced vanilla latte, but this time with oat milk. The oat milk added a bit of sweetness to the drink, so I preferred this pairing over the regular milk I had purchased before. I also ordered a cinnamon sugar doughnut; however, it wasn’t made fresh, rather, it was just a leftover item in the bakery stand. Even though the doughnut had been sitting out, it still tasted amazing and fresh. The sweetness of the cinnamon sugar coating paired well with the cakey fried dough. I believe the cinnamon sugar is a fan favorite for most customers who visit the shop.

I have been back several times since this, but I haven’t branched out very much. I have tried the traditional glazed doughnut and the iced dirty chai latte with oat milk. The glazed doughnut was amazing.

The dirty chai left me feeling a little unsatisfied, however. Like I said earlier, I like my drinks to lean towards the sweeter side, but the chai flavor was too subtle, and the cinnamon that was powdered on top of my drink left my mouth feeling dry. I won’t totally write off their chai, though. I need to do some more research before I make a final decision, but I currently prefer the vanilla.

I’m planning to return to study, and I really want to try their ice cream. All of the ice cream is made by another small local business in Winston-Salem called Dream Kreams. Dough Joe’s offers a large variety of flavors, ranging from the traditional vanilla all the way to blueberry butter pecan.

The only thing I wish is that they would add almond milk to the menu. For those who are lactose intolerant, almond milk is a go-to alternative. I know they offer oat milk, but there are people who are unable to have grains like those used to make oat milk. I like that oat milk is an option, but I wish they would also offer almond milk. Overall, Dough Joe’s Doughnuts & Coffee is a place everyone should try while they’re here in Winston-Salem. The food is delicious, and the ambiance is reminiscent of the old Campus Grounds.