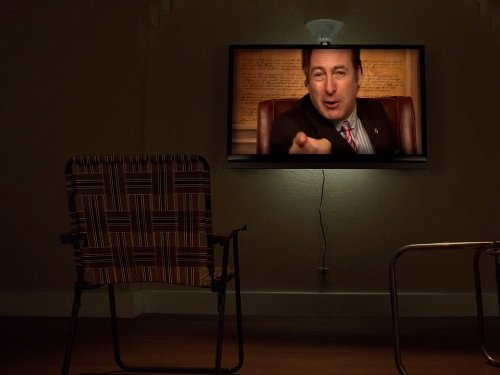 I’ve boycotted television. Why? Because I don’t want my (relatively unmalleable) taste unwittingly caged by the Netflixian ethos of limitation by inundation. What does that florid nonsense mean? It means Netflix’s algorithmic taste-making, a process that tracks viewing time, categorical habits and even lingering gazes through a flood of un-sifted nonsense, eventually causes the mind to acquiesce to mediocrity. As you pick through Netflix’s product, you commit, unwittingly, to their inferior catalogue, curated just for you.

But my effete paranoia is only part of the reason I am boycotting television. The added repellent comes from social alienation. The amount of times I have been told to watch a new show, some of which I have heard of, most of which are completely unknown, has reached a tipping point. Since, in my feeble effort to keep up, I failed to even graze the zeitgeist, my choice has become to forgo all televisual experience. There is simply no way everyone’s different, favorite TV show is “great, amazing, so good.”

There existed a time, briefly after The Sopranos and The Wire, a “New Wave,” one could almost say, where a few great shows animated the cultural conversation. The bar was high for great TV, and these few shows, guided by their consummate predecessors and undiluted by the din of gratuitous cultural noise, continued to push the medium to its limit, creating the now-debunked notion that television could usurp film as the dominant artistic medium. Note: the operative word is artistic, not dominant. It has absolutely become the latter. But the catalogue I’m referring to includes Breaking Bad, Dexter, Mad Men, and a few others, all dense, heady, dare I say borderline cinematic works of art that not only entertained the populous, but did so through aesthetic excellence. In terms of cultural discourse, these shows replaced, to an extent, the talked-about film, which replaced the talked-about novel some years before that.

Although one could argue this progression portended the end of difficult art, at least in the sense that it could coincide with commercial and popular attention, my point is that, ever since these shows captivated the nation, the medium has been in a slow decline. Not in visual texture (every television show looks like a feature-film now), but in genuine aesthetic investment and vision. The present deluge has led to desensitization and passive acceptance. Critical thought (or aesthetic appreciation) has no time to develop, no time to take root and grow into a subconscious force, because the next show in line has 10 decapitations, or a numbing amount of neon, or nudity, in the first seven seconds.

This is all a convoluted way of saying I can no longer make friends through cultural commonalities. I am adrift in a sea of referents. Once frustrated, then truculent, now benumbed, I take solace in the motion picture theater, the (considered-to-be) retrograde refuge of film. I find a home there and will dwell in isolation forever. The empty plaudits can’t find me there, in the dark, alone, as I watch some flinging thing save the world from destruction … oh, wait.