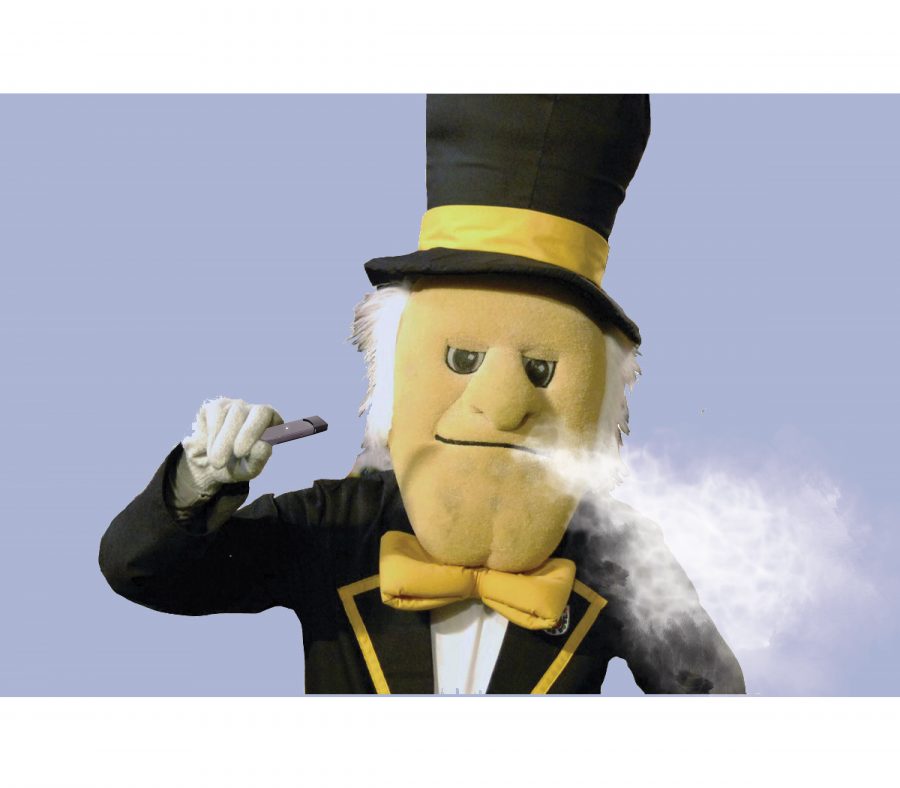 In light of a recently proposed ban of all e-cigarette products at Duke University, students at Wake Forest have turned an acutely tuned set of eyes towards their own campus vaping habits.

A sense of worry seems to pervade the Reynolda Campus and beyond. Such alarming news over a seemingly regular habit has induced a state of uncertainty, leaving speculation to be the only appropriate means of calming students’ busy minds.

“I think it’s entirely possible that Wake Forest could enact a similar policy,” said sophomore Sam Bass, “and I think kids are beginning to understand that it (vaping) is horrible for human lungs.”

The proposed ban at Duke is just the latest in an outburst of headlines regarding the dangers of e-cigarette usage. According to the latest publication from the Center of Disease Control (CDC) on Oct. 8, there have been 26 confirmed deaths in 21 different states with a direct link to vaping.

The CDC further reported that the latest national and state findings suggest that products containing THC (tetrahydrocannabinol, the psychoactive constituent of cannabis), particularly those sold on the street, are linked to the most cases of death.

According to the CDC, an e-cigarette may come in many shapes and sizes. Fundamentally, however, the CDC defines an e-cigarette as any vessel containing a battery, a heating element and a place to hold liquid with means to deliver nicotine or marijuana into the user’s system.

Beyond the reports of deaths, additional lung injury cases from 49 states, the District of Columbia and one United States territory have all been reported to the CDC.

Contillo, who graduated from Wake Forest in 2019, expressed his concerns over an outright ban on e-cigarettes.

“I think it’s the worst possible response in this scenario,” Contillo said. “It’ll just force people to buy from unregulated sources, putting them at higher risk of exposure to harmful compounds.”

For users of vaping products, this is a worrying prospect.

“I enjoy using a Juul,” said sophomore Connor Taggart, “but I’m worried that the government hasn’t been protecting my interests and honestly hope to kick the habit soon.”

The implications of a potential ban on e-cigarettes extend beyond the Reynolda Campus, reaching into the local community and, more pressingly, its economy. Historically a tobacco town, Winston-Salem finds itself at a crossroads, reconciling past and present as nicotine consumption rides an ever-changing wave of public habit.

For local businesses, an e-cigarette ban at Wake Forest could prove to be a death sentence.

“Besides the regulars we see each day, students make up a large number of our customers,” said Brendan Dabila, an employee at Stratus Smoke & Vape, a store about five minutes down Reynolda Road by Lowe’s.

According to Dabila, the store has received numerous questions per day regarding the quality of its products since the CDC first began publishing deaths linked to vaping. Stores in general have begun to feel like underground markets since the articles, Dabila said, adding that there is a constant need to justify their products.

“We’ve definitely seen a drop in sales since the articles came out,” Dabila said. “But we’re hoping people don’t get too caught up in the media.”

As of October 2014, Wake Forest enforces a “smoke-free policy” on campus. According to the document, smoking and breathing secondhand smoke pose significant health hazards. Smoking is defined as: “the burning of any type of tobacco, tobacco-derived, or vapor products.”

This campus policy covers the inside of all buildings on the Reynolda Campus, but as of now there is no outright ban of the products on campus.