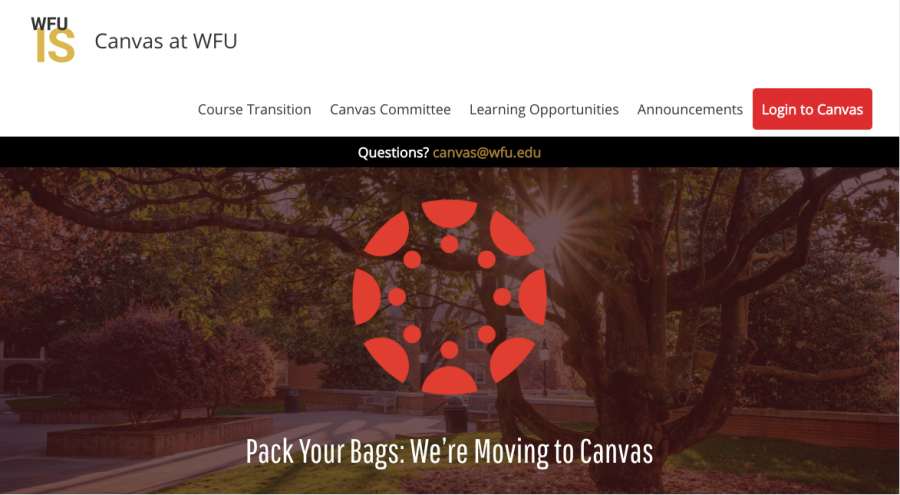 Next year’s incoming freshman class will never know what Sakai is. They’ll probably hear about it in passing from upperclassmen, but the majority will not experience it.

The university is in the current process of transitioning their Learning Management System (LMS), from Sakai to Canvas, with the goal of being fully transitioned to Canvas by the fall 2020 semester.

Canvas, a LMS by the company Instructure, was started in 2009 and has gained a lot of traction among universities and K-12 schools in the past 10 years. According to an article published yesterday in Inside Higher Ed, Canvas has not lost a higher education customer since it began nine years ago, except in cases of university closures.

Wake Forest transitioned Sakai, from another LMS called Blackboard, in mid-July of 2010. After using it for the better part of ten years, it came time to re-evaluate the university’s LMS.

Assessment began in the fall of 2017, when focus groups of faculty, students and staff were formed to evaluate Wake Forest’s needs and goals in terms of LMS, according to the university’s webpage for Canvas. From there, committees were formed in the spring of 2018 to further assess the university’s needs as well as the overall landscape of LMS in higher education.

Laura Brewer, LMS Manager for the university, noted that Canvas will be user-friendly for both students and faculty, with many tools and features that can benefit student learning outcomes while still simplifying the interface for faculty.

“My first real trial of Canvas was probably [in] 2013, and by this time Canvas was this full fledged LMS,” Brewer said. “The difference between Sakai and Canvas is Canvas was originally created [and] brainstormed by students.”

One unique way that the LMS is student-driven is in its notification system. Students can choose how they are notified of messages — they can choose between emails, texts and more.

On the faculty side, grading will become easier, for example. Faculty members will be able to mark up assignments without having to download them to their desktop, according to Brewer. They’ll also be able to leave feedback in the form of video messages, and the student can reply with a video message. Brewer hopes this will be a “trickle-down benefit” for students, with the hopes that viewing the assignment on Canvas and having different options for feedback will allow the professor to return graded assignments in a more timely manner.

Canvas can also sync up with both a student and faculty member’s Google Suite functions, such as Drive and Calendar. For example, due dates posted in Canvas can appear in a student’s Google Calendar and assignments can be automatically created by faculty in Drive, all while operating inside the Canvas LMS.

While the full transition is hoped to be made by the fall semester of 2020, faculty can now begin to transition to Canvas, as it is technically available. According to Brewer, there are currently 126 faculty who are signed up as “early adopters,” with sign-ups going on until the end of the month. Brewer will be holding small group workshops with these “early adopters” to help faculty members transition and move their courses over to Canvas.

“This is their opportunity to get in there, play with it and figure out how to make it do what they want it to do,” she said.

Many of these faculty will be using Canvas to teach in the spring or want extra assistance through the workshops provided for early adopters before they fully transition, Brewer said. As the university continues to transition to Canvas, she will also work with faculty to help them re-imagine their courses and how they can best integrate Canvas.

Brian Calhoun, a professor who teaches college to career classes in the education department, has worked on committees throughout the evaluation and selection process and has signed up to be an “early adopter.” He demonstrated both the student and teacher apps for the Old Gold & Black with enthusiasm.

“I am very much so [enjoying Canvas],” Calhoun said. “I can access it from my phone, from my laptop. I think the accessibility is going to be a real benefit to students and faculty. I’m really impressed so far.”