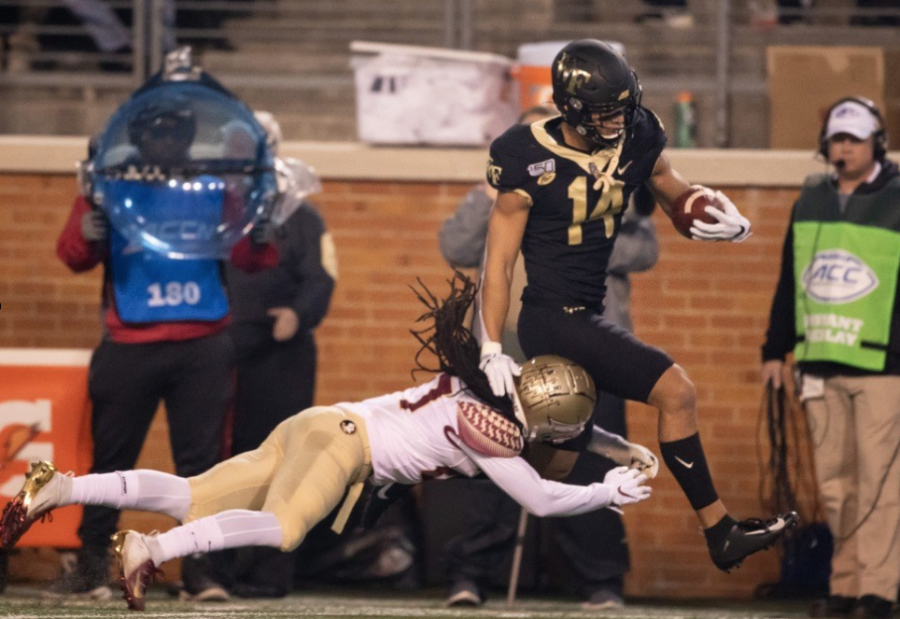 On a rainy Saturday night, courtesy of Hurricane Nestor, the Demon Deacons got back in the winning column, pulling a last- minute 22-20 win against Florida State at BB&T Field.

Much like the forecast, for most of the night, it was not a beautiful offensive showing by either of the teams. Yet, it will be one that Wake Forest fans will remember for a long time regardless.

The Deacs were fresh off their first loss of the season last week against Louisville in what was the second-highest scoring game in ACC history. So, a low-scoring, field position win against the Seminoles was definitely welcome by the Demon Deacons.

“I think both teams played well, and it came down to the last minute. Once again, this week we found a way to win and I’m proud of our guys,” said Head Coach Dave Clawson after the game. “I’m proud of the defense; they bounced back from last week. I’m proud of our offense and Sam Hartman. His performance wasn’t always clean but made the throws when we needed them. Nick Sciba had five field goal attempts tonight, and he made all five of them. This was a gritty win; our team didn’t give up, and we found a way to win.”

Hartman filled in as the starter quarterback in place of Jamie Newman for the second week in a row. He struggled with accuracy on short and intermediate routes for most of the game, even before the rain started pouring, but he kept the ball moving when it mattered the most and avoided turnovers. Hartman finished the game passing 21-38 for 308 yards, while also adding 44 more yards on the ground.

Even though Hartman struggled at times, the Deacs did not have much trouble moving the ball against a porous Florida State defense. Yet, their struggle to capitalize on red zone trips held promising drives to field goal attempts. Wake Forest got to Florida State’s red zone six times, but only managed to get one touchdown on a run by running back Cade Carney out of a wildcat formation.

“You always want to score — but we have a great kicker in [Nick] Sciba,” Clawson said. “Some points are better than no points.”

Kicker Nick Sciba was crucial down the stretch, converting all five of his field goals attempts in the game, including the 25-yard game-winner in poor conditions. Sciba holds the nation’s longest active streak of consecutive made field goals with 23, dating back to the Notre Dame game last season. His five made field goals tied Wake Forest’s record for most field goals made in a single game.

Despite the offensive struggles, wide receiver Sage Surratt continued to perform like one of the best receivers in the country. Surratt led all receivers with seven receptions for 170 yards. This was Surratt’s fifth game of the season with more than 100 yards. He’s second in the nation with 881 yards through seven games and first in the ACC in both yards and touchdowns (9).

“That was a great team win for us. It wasn’t pretty, but we got it done,” Surratt said “We played with a lot of fight and a lot of heart out there. Guys were just excited. It’s a great win for us, especially against a program like that. They have a very talented team. It was a good win for us and very exciting.”

This was Wake Forest’s first win against Florida State since 2011 and the first under Clawson. The Demon Deacons will now head into another bye week before they face NC State on Saturday, Nov. 2, during Family Weekend. After the Louisville loss, the Deacs continue winless (0-7) after a bye week under Clawson. That is a fact that neither Clawson nor his players will forget anytime soon.

“Now we’ll head into a bye week and instead of reading about how we can’t beat Florida State, now you guys [the media] can write again about how we don’t win after a bye week,” Clawson said.

Wake Forest was able to shift narratives against Florida State Saturday night by successfully weathering the storm against the Seminoles. Now, sitting at a 6-1 record for the first time since 2006, the Deacs will hope they can continue to defy narratives.