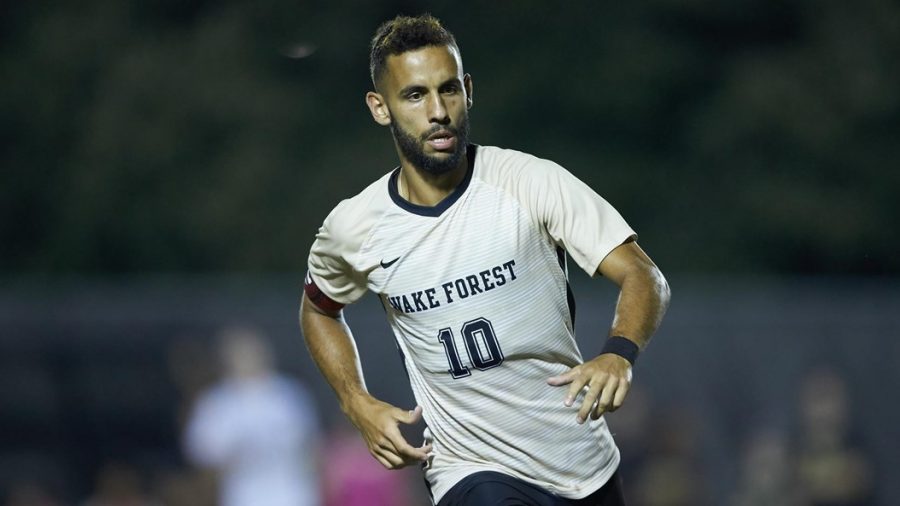 The Wake Forest men’s soccer team was on opposing ends of late game heroics this week in games against North Carolina and Loyola Maryland.

It was a vivid reminder of the dichotomous nature of soccer, a sport that can be unbelievably kind before turning devastatingly cruel.

In a pivotal ACC matchup Friday night against UNC, Wake Forest won 1-0 on a late goal by Bruno Lapa. Just a few days later however, Wake Forest drew Loyola Maryland 1-1, giving up the tying goal with just 12 seconds left on the clock in regulation.

Indeed, soccer is kind and cruel, heartwarming and heartbreaking.

In the game against UNC, the Deacs looked like the better team for most of the match, but the Tar Heels were grinding and keeping it scoreless deep into the second half. Then, in the 78th minute, Wake Forest senior Bruno Lapa broke through to give the Deacs a 1-0 lead and eventually the victory.

“We knew if we played off a switch, we could get some chances coming inside,” said Wake Forest Head Coach Bobby Muuss.

Wake Forest put on a passing clinic during the lead up to Lapa’s goal. Alistair Johnson passed the ball to Machop Chol, who was right outside of the box. Chol then dribbled inside the box and deftly passed to Lapa on his left. Lapa then hit a hard, decisive shot into the bottom left corner of the goal which gave Wake Forest the victory.

“When Machop got in behind and was able to beat the guy, I made my run. I saw the opening and was screaming to him to play the ball back, and I was very fortunate to get the end of it,” Lapa said. “Me and Machop always talk about those cut balls back in training and even when we’re hanging out outside of soccer.”

Wake Forest ended the night with 56% of the possession and five shots on target compared to zero for UNC.

The defense for Wake Forest was outstanding in the first half. The team allowed no shots and defender Eddie Folds particularly stood out with a number of key clearances and tackles to stymie the UNC offense.

The entire team was functioning as a well-oiled machine, which allowed them to preserve the victory and the shutout. It was the Deacs’ eight shutout of the season.

The victory vaulted Wake Forest to the top of the ACC standings and put them in a prime position to capture the top seed in the ACC Tournament.

The Deacs’ second game of the week came against Loyola Maryland. The match ended in a 1-1 tie after two overtime periods.

Wake Forest’s goal came within the first six minutes of the game. Calvin Harris had the ball on the right side of the box and passed a brilliant ball that split two defenders to Lapa, who was towards the center. He deftly created space between himself and the defense as the pass was coming in and fired a hard and low shot into the corner to give Wake Forest the 1-0 lead. This was Lapa’s sixth goal in the past five games.

It looked like Wake Forest was headed for the win until, with only 12 seconds left on the clock, Loyola’s Barry Sharifi crossed the ball into the box from near the right sideline. Josh Fawole stuck out his foot and hit the ball on a one-touch into the upper cross bar over Andrew Pannenberg. The ball ricocheted past the line and into the goal to force the match into overtime.

“We didn’t get pressure on the ball, [allowing for] service in the box, [and he] scored a really good goal. It’s not the 12 or 13 seconds, it’s the minute and a half up to that [moment] where we had a transition opportunity, we underhit a ball in front of them, could have went to the corner,” Muuss  said about the final goal. “We just didn’t manage the game well. When you play backwards with 25 seconds left anything can happen.”

The two overtime periods included four shots for Loyola and three shots for Wake Forest. Ultimately neither team was able to score and the final score remained 1-1.

“We have to bounce back and learn from it,” said Lapa. “It definitely doesn’t feel good. It feels like a loss for us.”

Wake Forest takes on Notre Dame at Spry Stadium on Saturday night for their final regular season game at home.