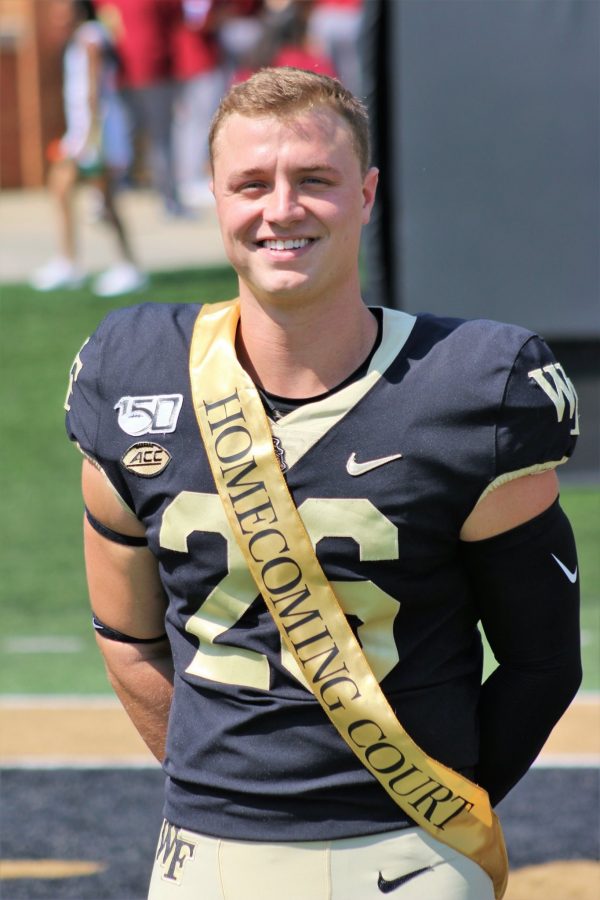 Redshirt junior Justin Bartee knew from the minute he stepped onto the upper quad that Wake Forest was the school for him. What he didn’t know, however, was that he would become a Demon Deacon athlete. In the spring of his freshman year, he tried out as a walk-on for the football team. He was offered a position and has been putting in hard work ever since. It paid off at the Homecoming game, when he made his first tackle and was cheered for during halftime when he stood as an elected member of Homecoming Court.

His experience as an athlete in the school of business led him to co-found a club this year called “Athletes in Business,” which has already helped to educate and support over 30 athletes interested in the business school and business careers. He hopes to support even more athletes in this pursuit, as well as his teammates in this winning season.

Lucy Nelson: Fun fact about yourself?

Justin Bartee: I’m a huge Star Wars nerd. I think I’m being [Chewbacca] again for Halloween this year. I actually have socks, one’s C-3PO, and one’s R2-D2, and I’d wear them to work every Friday this past summer.

LN: What are you involved in on campus?

JB: I am currently the Vice President of Administration for Alpha Kappa Psi, the business fraternity. I also founded a club with another senior, Kate Zurlo, called “Athletes in Business” with the goal of trying to get more student athletes applying and accepted to the business school. Sometimes students are misinformed, and it’s a lot easier for some kids who know more about the business school than some of the athletes, and so we kind of just want to guide them. Even after that in the spring we hope to help athletes find summer internships that fit with their schedules. We had 30-40 athletes that showed up to the first meeting and professors from the business school came to speak. So, we’re super excited.

LN: What is it like being a walk-on to the team?

JB: I mean, obviously there are differences just because of scholarship money and all that, but there’s no difference in the locker room or anything. It’s not like you get treated much differently, maybe outside of the fact that you have more scout team roles in practice, and that comes with the territory. It’s tough at times, but I think it adds to who I am as a person.

LN: Did you know that you wanted to walk-on when you came here?

JB: No, and that’s what’s funny: you know, maybe halfway through the fall of my freshman year I decided that I wanted to do something. And I didn’t know what yet, but I missed playing football. So during winter break, I actually went to see the Military Bowl with my dad, and we talked about it. Through a couple of family friends, I got connected and was encouraged to try out for the team in the spring.

JB: I usually go with my parents to Jeffrey Adams, and I’ll get the maple bourbon glazed salmon with asparagus and a loaded baked potato. My parents come to nearly every game, and I think my dad might be one of the biggest Wake Forest fans ever now.

JB: This year’s Homecoming game. I played eight times and had a tackle, and it was my first game ever getting playing time in. It was definitely something I’m never going to forget.

LN: What do you think the senior class adds to the team?

JB: I think just the work ethic that the senior class has. The group of kids that are my year have been here for all the winning seasons, but the fifth-years were here when the team had a losing record, so they’ve been through it when it hasn’t gone our way. They’ve kind of started this shift going the right way, and they’ve passed it on to my class and the team. I think the mentality of the team is that hard work pays off.

LN: Hopes for your last season?

JB: Obviously I’d love to get in again. But honestly just being there for my teammates. I’m a pretty big moral support guy on the team, a little cheerleader on the sidelines Laughs. I think everyone has a role, and there’s only 11 people on the field at one time, but we have 100-plus on our team, and so everyone’s gotta be doing something to help the team win. So it’s just kind of embracing that I’m a senior … I’ve been through some of the ups, I’ve been through some of the downs … but now I’m just keeping everyone engaged and locked in, and keeping the sidelines fun during the game for some of the guys.