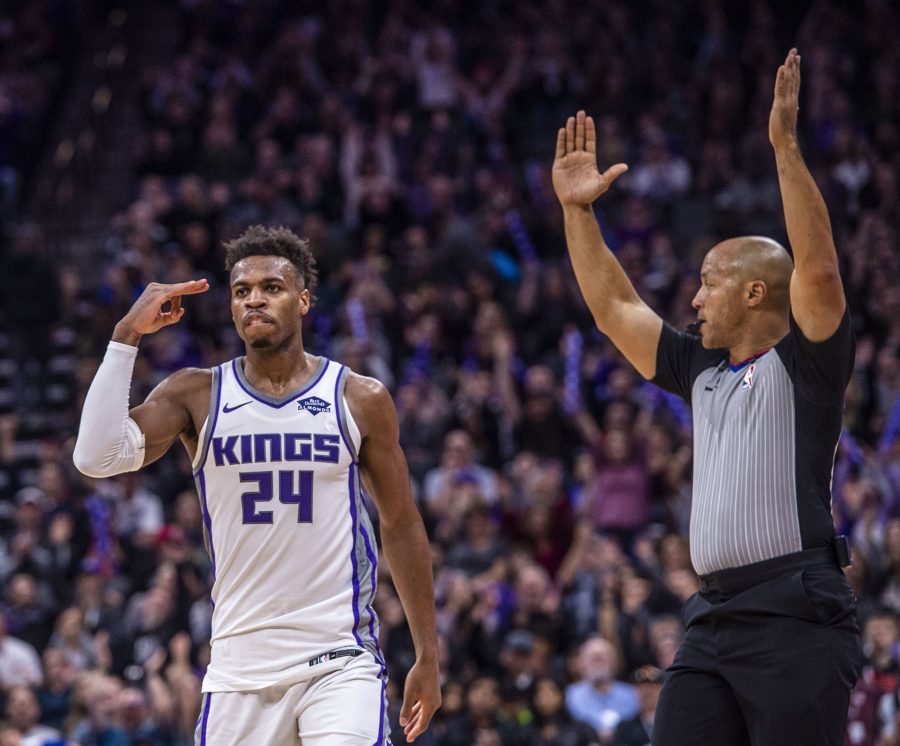 The Sacramento Kings' Buddy Hield (24) celebrates a three-point basket as referee Marc Davis signals the play against the Phoenix Suns on March 23, 2019, at the Golden 1 Center in Sacramento, Calif. (Hector Amezcua/Sacramento Bee/TNS)

The Sacramento Kings are coming off a 101-94 loss to the Denver Nuggets and are currently the lowest-ranked team in the league. These losses were anything but hard fought, with an average point differential of 20 points through these first four games. With a team that had so much potential in its young core with the fantastic duo of De’Aaron Fox and Buddy Hield last season, should Kings fans be worried this streak of losses will continue? Why is it that the Kings are having such a rough start? It seems the most likely cause for the blowouts is the Kings cardinal sin of having a weak defense.

Last year, the Kings had a very entertaining and fast-paced offensive style. But the defense was always lacking. Most teams in 2018 could not handle the Kings’ offense when it was being hurled at them full force, but then their opponents would pound them right to the basketball. Looking at the highlights and plays from the games so far this season, it seems that the defensive schemes are very much lacking. Blow-bys are a dime a dozen unfortunately, but this season the defensive shortcomings are more apparent without the lightning-quick offensive power to compensate for it. Perhaps this is a symptom of new Head Coach Luke Walton figuring out what works and what doesn’t for his team, but even during Walton’s time with the Lakers, when he had another young core under his tutelage, the defense was lacking as well.

The Kings’ first loss was against the Phoenix Suns by 124-95, not a close game by any margin. The Suns so far have had an excellent first four games. In their two losses, both to playoff teams, the Suns lost by eight or fewer points, and every game has been a fantastic fight. The Phoenix Suns have been a pleasant surprise so far in the season, and it’s unsurprising that they beat the Kings during their hot start. If they continue the way that they’re playing now, the Kings should definitely be worried about not making the Playoffs.

The Kings’ second loss was to the Trailblazers, which was expected considering the scoring power of Damian Lillard and CJ McCollum. Lillard scored 38 points in the game, exposing the Kings’ need for a capable perimeter defender.

The next loss for the Kings was to the Utah Jazz. The only thing surprising about this loss is that the score difference was so high (32). Utah has an excellent defensive core around Rudy Gobert, which explains why the Kings had such a low score. No Kings player had more than 11 points in the game, while the Jazz had five players with double-digit figures. So far of the teams that the Kings have lost to, there has been none that they could plausibly overcome in a playoff series.

The final loss to examine was Monday’s loss to the Denver Nuggets. The Nuggets have more experience and offensive skills than the Kings, but their defense is not as great as that of the Jazz. If the Kings played the Nuggets in a playoffs series, the only way that they would have a chance would be if they doubled their scoring firepower to match the offense created by Nikola Jokic and Jamal Murray. The end result of this exercise shows how tough the Western Conference will be for the Kings in 2019. The West has too many teams with newfound strengths and talents  for the Kings to overcome both offensively and defensively. If at around the quarter point of the season the Kings are still 15th in the Western Conference, that will be the time to worry.