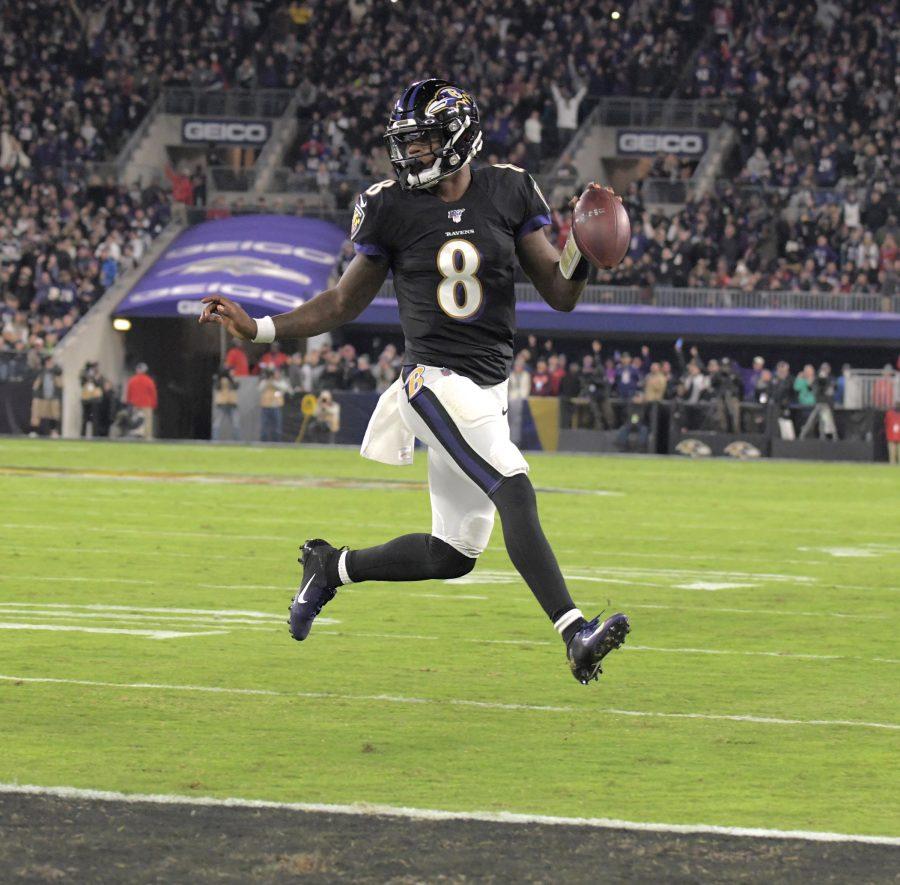 Ravens' #8, Lamar Jackson, runs in for a score against the New England Patriots in the first half at M&T Bank Stadium on November 3, 2019.

“Tom Brady and the Patriots sure must be thankful for the end zone cat” is certainly not a sentence that I predicted would go through my head going into this week. But it is one that is feasible after Monday Night Football featured a house cat making an attempt to run through the end zone at MetLife Stadium, drawing a small amount of attention away from the Patriots’ blowout loss in Baltimore. The Ravens’ win was one of many for home teams in Week 9. As we reach the midway point of the regular season, let’s look at some of Week 9’s big games and preview some of Week 10’s.

Missing Mahomes, the Chiefs relied on offensive playmakers and steady defensive play to hand the Vikings their third loss of the year. Damien Williams put up 125 yards and a touchdown on the ground, while Tyreek Hill caught six passes from Matt Moore for 140 yards and a score. Sammy Watkins and Travis Kelce were also reliable targets for Moore, each hauling in seven catches. Meanwhile, the Vikings struggled to find a spark on offense. Dalvin Cook failed to put up a touchdown for only the second time all season, and while eight receivers caught passes from Kirk Cousins, not one could top 60 receiving yards. This game was a reality check for the Vikings and a confidence-booster for the Chiefs, who expect to see Mahomes back in action some time in the next few weeks.

There will be no 0-16 team this year, to some Dolphins fans’ delight and to others’ dismay. On Sunday, the Dolphins defeated the Jets to swap places with New York at the bottom of the AFC East. This game was special for two reasons. One, it was awfully late in the year to produce two one-win teams as a result. Even more unique, this game featured two scores by safeties, one for each team. This is only the 10th time in NFL history that feat has been accomplished (out of roughly 16,000 regular season games played). So, bravo to the Dolphins and Jets!

“MVP, bro.” That’s what Ravens safety Earl Thomas had to say about his quarterback, Lamar Jackson, after Jackson scored two touchdowns on the ground and added one through the air to beat the Patriots. The Ravens dominated this game from the beginning. Two un-Patriot-like turnovers in the second half allowed the Ravens to pull away, and Lamar and Co. weren’t looking back. The Patriots are still a formidable opponent and likely the favorites to win the AFC. However, the Ravens proved to everyone that they can play with, and even outplay, the big boys.

Christian McCaffrey has propelled the Panthers back into relevance in the NFC. As the Panthers place Cam Newton on IR, nobody could have predicted they would have a solid substitute in Kyle Allen to complement McCaffrey. Just how legitimate the team’s potential is tested at Lambeau Field on Sunday. Few are expecting the Panthers to win this one, but they simply can’t take another pounding like the 51-13 loss they suffered at the hands of the 49ers. To avoid that, Kyle Allen just has to manage the game and let McCaffrey and the defense do the dirty work. Aaron Rodgers had a below average game by his standards last week, but he’ll likely get back on track at home.  This game could be a statement for either team as they fight to secure footing for the playoffs.

The Vikings saw a four-game winning streak come to an end last week, but they’ll have no time to dwell on that as they have the opportunity to play another NFC playoff contender this week in the Cowboys. Ezekiel Elliot and Dak Prescott were both looking true to form on Monday night. The Vikings have only given up two 100-yard rushing games to running backs this year, and they’ll need to hold Zeke back if they expect to win in Dallas. Kirk Cousins played well in their loss to the Chiefs, but he may have to account for some more big plays to get past the Cowboys defense.

In what has become an even bigger NFC matchup than Vikings-Cowboys, the 7-2 Seahawks look to pull off the road upset at the undefeated (8-0) 49ers. The 49ers need to take their close away win at Arizona as a wake-up call if they hope to survive the surging Seahawks, winners of five of their last six games. The NFC West is still up for grabs even though the 49ers are undefeated, and this division will likely claim one of the NFC’s Wildcard spots. With a big game from Jimmy Garoppolo, the Niners could quiet a lot of noise and build themselves some wiggle room for the second half of the season. Don’t expect the moment to be too big for either QB in this one.