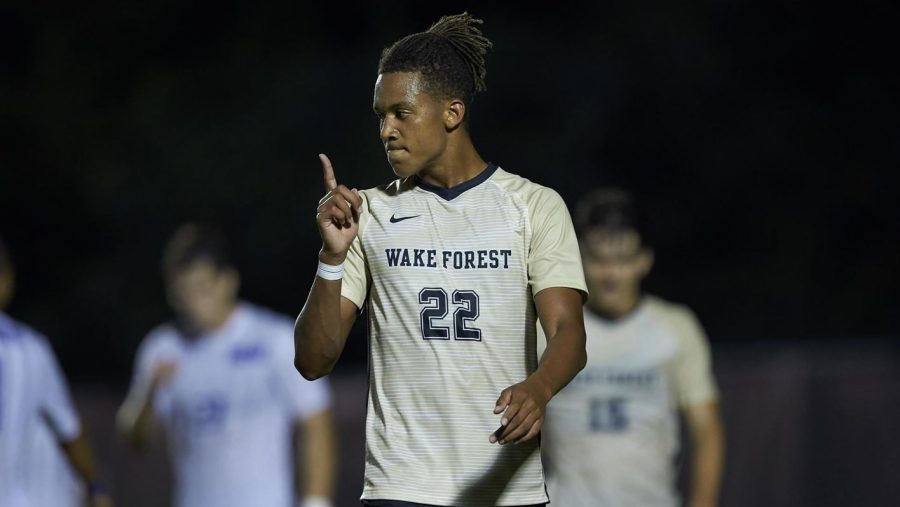 Head Coach Bobby Muuss has built a program that is consistently successful and exciting to watch. Spry Stadium has one of the best atmospheres in college soccer, and Wake Forest soccer alumni are successfully playing in professional leagues.

Wake Forest’s final regular-season game of the 2019 season was similar to most of their games over the past few seasons — they won. On Friday night in Louisville, Ky., the Deacs continued their winning ways and defeated Louisville 3-1.

Freshman forward Calvin Harris was the star of the night, scoring two goals. For his performance, Harris was named the ACC offensive player of the week. Harris is having a sensational freshman season, scoring six goals and recording two assists. Harris’ impact goes beyond the stat line, though. His deft touches and creative play have helped to propel the offense throughout the season.

Harris’ first goal opened up the scoring for Wake Forest in the 18th minute. He received a pass while closely defended at the top center of the box. He then dribbled around the right of the defender and wound up to take a shot. Harris’ shot sliced across the pitch and ended up in the left netting of the goal to give the Deacs a 1-0 lead.

Five minutes later, Harris would net his second goal of the night. Machop Chol was making a run down the left side of the Louisville box and passed the ball toward the center. Harris hit the ball with one touch and doubled the Deacs’ lead.

The first half wasn’t all smooth sailing for Wake Forest. In the 36th minute, Louisville’s Louka Masset scored off of a backheel shot to cut Wake Forest’s lead down to one.

At halftime, Wake Forest held a 2-1 lead with two fewer shots and one less corner kick than Louisville.

The only goal of the second half came in the 52nd minute. Alistair Johnson gave Aristotle Zarris a long pass into the box, which Zarris was able to hit hard with his right foot and sail it past the goalie.

At the end of the match, Louisville outshot Wake Forest 10 to eight, but the Deacs had a five to two advantage in shots on target. Additionally, Wake Forest had four corner kicks compared to Louisville’s three.

The 3-1 win was Wake Forest’s sixth in ACC play. The Deacs finished the regular season in second place in the ACC Atlantic with 18 points and trailed Clemson by only 1 point.

Wake Forest’s first ACC tournament game will be on Sunday, Nov. 10 at 5 p.m. at Spry Stadium. As the No. 3 seed, the Deacs will now wait to find out their first round opponent. They will either play Louisville again or Virginia Tech. A game against the Hokies would mark the first time the two teams would meet this season.