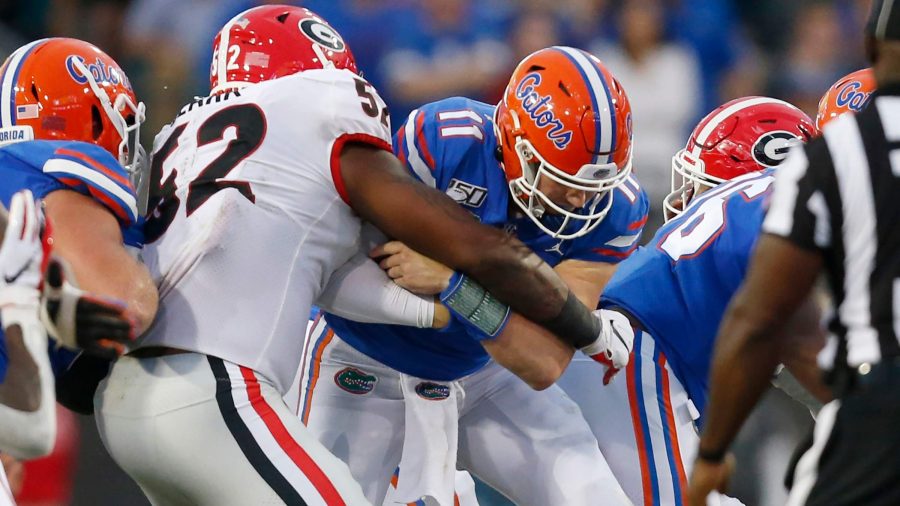 Florida Gators quarterback Kyle Trask (11) is tackled by Georgia Bulldogs defensive lineman Tyler Clark while scrambling to get a first down during the second half of the game at TIAA Bank Field in Jacksonville, Florida on Saturday, November 2, 2019. OCTAVIO JONES | Times

The No. 8 Georgia Bulldogs (7-1) marched into Jacksonville on Saturday afternoon to take on the No. 6 Florida Gators (6-2) in a bout between two top-tier SEC squads. With the eyes of the college football world upon them, Georgia delivered an impressive performance on both sides of the ball en route to a critical 24-17 victory. Bulldogs quarterback Jake Fromm conducted the offense with ease, connecting with eight different receivers and collecting 279 passing yards and a pair of touchdowns along the way. Georgia’s defense rose to the occasion as well, suffocating the Gators halfbacks and allowing only 21 yards on the ground. The Bulldogs led from wire-to-wire, scoring the game’s first 10 points and holding the Gators without a point until late in the first half. With the victory, Georgia’s playoff hopes remain intact as they seize the No. 6 spot in the College Football Playoffs top 25 rankings, while Florida drops to a 6-2 record.

Two AAC prizefighters collided in Memphis last Saturday night for a pivotal in-conference showdown. The two gunslinging offenses were firing on all cylinders, combining for over 1,000 yards of total offense and one of the most entertaining games of the weekend. While an outstanding performance from Mustangs quarterback Shane Buechele (456 passing yards and three touchdowns) helped SMU stick around for a while, the visitors were eventually overwhelmed by the Tigers’ dual threat offense. Memphis quarterback Brady White gouged the Mustangs’ secondary for 350 yards and three touchdowns of his own, while halfbacks Antonio Gibson and Kenneth Gainwell collected 165 total yards and a touchdown apiece. With the loss, SMU (8-1) suffers its first defeat of the season as the plot thickens in the race for the AAC American West division.

The Fighting Irish (6-2) were given all they could handle at home on Saturday as they narrowly avoided a gutsy upset bid from the visiting Virginia Tech Hokies (5-3). Notre Dame quarterback Ian Book dragged the Fighting Irish across the finish line, throwing the ball 53 times for 336 yards and two touchdowns in the hard-earned victory. Book also led the Irish in rushing yards, collecting 50 yards on the ground and finding the end zone late in the fourth to give his team the final lead. Virginia Tech quarterback Quincy Patterson II completed just nine passes for a subpar 139 yards and the Hokies’ sole offensive touchdown, while running back Deshawn McClease was held to just 32 yards on the ground. With the victory, Notre Dame avoids a treacherous third loss and shows up in the first CFP rankings at No. 15.

No. 8 Utah (8-1) ventured westward to Washington (5-4) on Saturday, facing off against the Huskies in an action-packed Pac-12 contest. The Utes stumbled out of the gate, unable to find the end zone for the first 27 minutes of gameplay until a Tyler Huntley touchdown pass to halfback Zack Moss opened the floodgates. Still, the Utes didn’t claim the lead until early in the fourth quarter when quarterback Tyler Huntley maneuvered his way into the end zone on a quarterback sneak from the 1-yard line. Moss scampered across the goal line again a few minutes later, putting the finishing on another solid road victory for Utah. Though Washington quarterback Jacob Eason took to the air for 316 yards and four touchdowns, his two interceptions shifted crucial momentum in Utah’s favor. The road victory allows Utah to crack the CFP’s top 10, while Washington continues its recent downward spiral.

Two of college football’s remaining unbeaten teams face off in a battle for the high ground in the Big Ten. The Golden Gophers will have their work cut out for them as the Nittany Lions look to continue their rigorous pursuit of an appearance in the Big Ten Championship game.

In perhaps the most meaningful game of the regular season thus far, two of the nation’s best duke it out, fighting for separation in both the SEC standings and the College Football Playoff race. Something has to give as two star-studded squads collide in Alabama on Saturday afternoon.

Camp Randall will be buzzing on Saturday as Wisconsin hosts Iowa in a battle for second place in the Big Ten West. Both teams look to improve their postseason resumés with a decisive in-conference win as bowl season approaches.