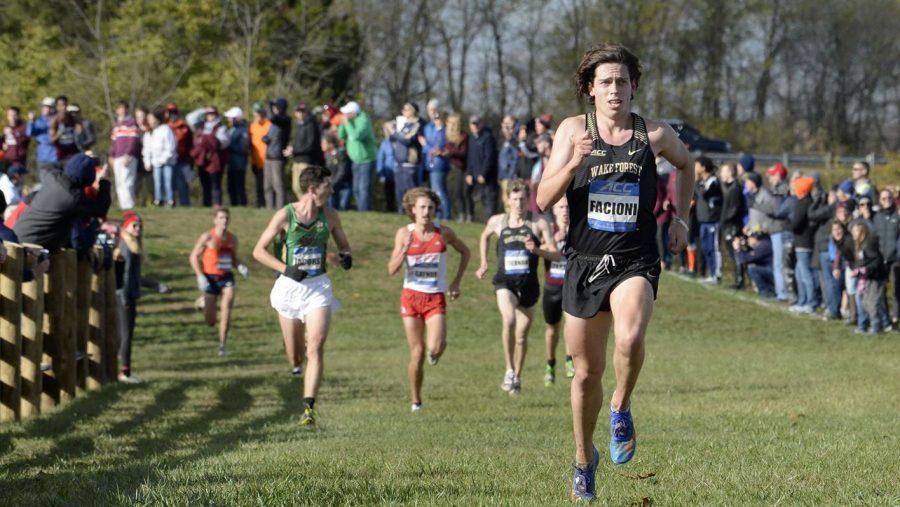 The men’s and women’s cross country teams traveled to Virginia Tech’s home cross country course in Blacksburg, Va. to compete in the ACC Championships. The men’s team placed fifth over the 8k race, tying their best team finish since 2005 at the meet. The women placed sixth over the 6k course, which was the second best team showing since 2008.

The men’s 116 point team score was led by sophomore Zach Facioni’s fourth place finish. His time of 24:32.5 earned him All-ACC for the second year in a row in just his second year. Junior Jack Tiernan was close behind him, finishing in eighth place to join Facioni in the top ten and earning All-ACC honors. Freshman Carter Coughlin in 24th place, sophomore Brent Bailey in 34th place and junior John LePino in 46th place put all five scorers for the Deacons in the top 50 finishers of the meet.

It was an extremely tight finish on the men’s side in a field that included six nationally ranked teams in Syracuse, Notre Dame, Virginia Tech, Virginia, Florida State and NC State. The Demon Deacons finished right in the mix, beating NC State and Florida State with their fifth place trophy.

The women were led by two All-ACC finishers as well in sophomore Elise Wright and senior Samantha Halvorsen. Wright led the Deacons with her 14th place finish in a time of 21:12, while Halvorsen clocked in at 21:20 to take 19th place. They were completed by a trio of Deacons punching in close together. Senior Hannah Brookover led the pack in 42nd and was closely followed by sophomore Georgia Evans in 43rd and sophomore Meredith Helton in 46th place.

The women’s race was very competitive as well, finishing just 12 points out of fourth place and behind four top ranked squads in the nation in NC State, Florida State, Notre Dame and Virginia Tech. Women’s Head Coach Ashley Botham joined the Demon Deacon squad in August and experienced her first ACC Championships along with the team.

“The women did an excellent job at the 2019 ACC Cross Country Championships,” Botham said. “We knew it would be a tight battle going into the race and that certainly proved true. The women stepped up and rose to the challenge, finishing higher than their ranking going into the meet. Wake Forest finished in 6th place, 12 points behind 4th place and just 4 points away from 5th place. I am incredibly proud of the effort the women gave and their tenacious mindset going into the meet. They aren’t afraid to line up against some of the best teams in the nation and that bodes really well for our future.”

The meet marked the beginning of the postseason for the Demon Deacon harriers and will be followed by the NCAA Southeast Regional Championships in Charlottesville, Va., on Nov. 15. There, they will try to be one of the top team finishers to ensure a spot in the NCAA Championships in Terre Haute, Ind., on Nov. 23.