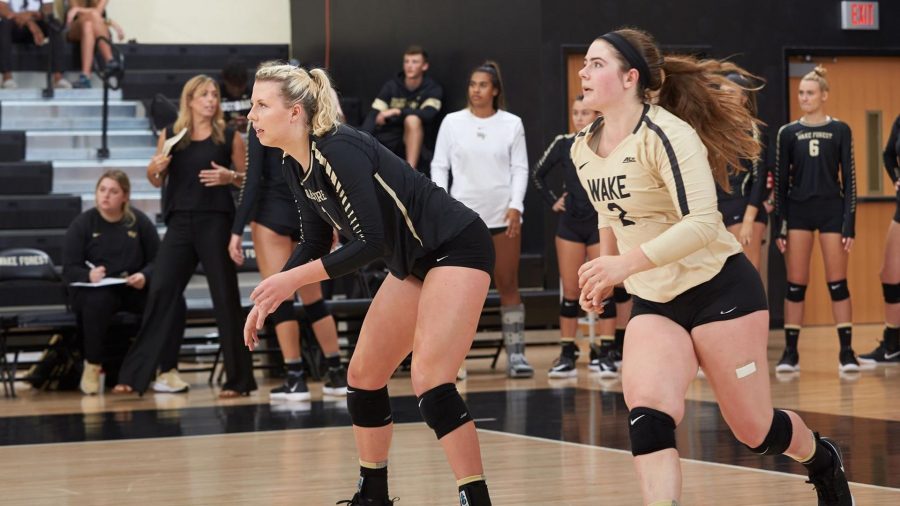 Wake Forest Volleyball continued its descent down the ACC standings, as two consecutive losses to No. 2 Pittsburgh 23-1 (12-0) and Virginia 10-15 (2-10) dropped the Demon Deacons into last place in the ACC and increased their losing streak to nine matches.

Pittsburgh welcomed Wake Forest to the Fitzgerald Field House and promptly showed why they are ranked near the top of the national standings. The Panthers dominated the Demon Deacons across three straight sets on their way to a 25-12, 25-11, 25-20 victory.

The first two sets were decided early on as Pitt held respective 10-5 and 11-3 leads before closing each out easily. The Panthers recorded 27 total kills against only seven errors for a remarkable 40% hitting rate while forcing the Deacs to record more errors (12) than kills (10). Wake Forest’s hitting percentage sat at -.04 after two sets.

Wake Forest showed some fight in the third set, as they battled evenly with Pitt to a 13-13 tie, surpassing their point totals from the first two sets. A Wake Forest service error followed by two aces from Pittsburgh senior outside hitter Stephanie Williams spearheaded a 4-0 run that turned the tide of the game before the Panthers proceeded to close the game out 25-20.

They played an aggressive brand of volleyball from the outset, as four kills from three different players gave the Demon Deacons a 7-4 lead. The Cavaliers battled back to tie the game at 15-15 before consecutive kills from Saunders and freshman outside hitter Peyton Suess started a 5-0 run. Wake Forest never relinquished this lead, winning the first game 25-21.

The second set continued the competitive play from the first touch, as Virginia held a slim 8-6 lead early. The Cavaliers then ripped off a 7-2 run of their own, tallying four kills in this stretch en route to a 25-16 set victory. Virginia proceeded to play two sets of near perfect volleyball to close out the match. The Cavaliers hammered home an astonishing 30 kills against only four errors to outscore Wake Forest by a combined tally of 50-30, shutting the book on a potential streak-ending victory for the Deacons.

Junior outside hitter Sarah Billiard and freshman outside hitter Jayna Francis recorded 11 kills apiece for Virginia. Suess had another good outing for the Deacons, posting 12 kills of her own.