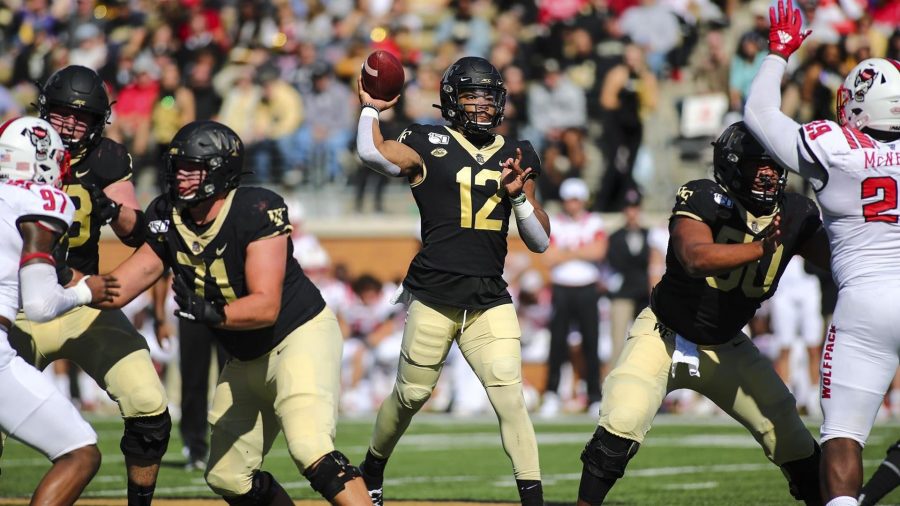 Before their matchup against NC State, the Demon Deacons faced many season-defining questions.

Would Jamie Newman be healthy enough to face the Wolfpack? Could the Deacs finally break their winless record (0-7) after bye weeks under Head Coach Dave Clawson? Could Wake Forest fix some of the defensive and special team miscues that cost their first loss of the season against Louisville? These were some of the concerns going through the minds of many Wake Forest fans as they filled BB&T Field for the rivalry game.

After one quarter of play and an early 21-0 lead by Wake Forest, all concerns were put to bed as the Demon Deacons (7-1) cruised to a 44-10 win against the Wolfpack (4-4), good for the second-largest victory margin (34) by Wake Forest in the rivalry.

Newman showed he was finally back to full strength after throwing for three touchdowns and 278 yards while completing 65.8% of his passes. Newman also displayed some of his athleticism, adding two other touchdowns on the ground. If he continues this level of production, Newman is bound to have his name among the likes of Travis Etienne, AJ Dillon and Sam Howell in the conversation for ACC Player of the Year.

“[Coming back from an injury] honestly didn’t feel different because I am always mentally prepared to help even when you’re not there physically,” Newman said. “Like the Florida State game, I still felt prepared like I was going to play that Saturday. So, staying mentally prepared always helps getting ready to get back out there.”

On defense, despite losing tackling leader and team captain LB Justin Strnad for the season due to a torn bicep, the Demon Deacons had a dominant afternoon against a struggling NC State offense.

In the secondary, redshirt senior cornerback Amari Henderson was the name of the game. Henderson forced the two interceptions of the afternoon, while also adding four pass breakups and a TFL.

The difference in physicality and urgency coming off the bye week in comparison to the Louisville game was tangible. Instead of poor tackling and positioning on defense and special teams, Wake Forest played its most disciplined defensive game of the year.

Right after scoring its first touchdown of the game, the Deacs recovered the ball back thanks to a forced fumble by DeAndre’ Delaney on the NC State kickoff return.

“I felt that with the preparation that week, we got down to the base of our defense and offense real quick. That helped us just be prepared a little bit more about NC State in a long week, and we were just communicating a lot better,” said defensive lineman Sulaiman Kamara. “It was just something that we wanted to change that culture of coming off a bye week losing. We wanted to change that, and in practice, everyone just came out with a lot of energy. We just wanted it and we didn’t want to have the same mistakes as in past games.”

On Saturday, Wake Forest certainly showed improvements both in getting up for games after the bye week and shoring up some defensive woes. Whether they can replicate this same level of defensive and special teams play down the stretch still remains to be seen. Yet, the defensive improvements, especially in the secondary, were tangible against an inexperienced NC State offense.

The Demon Deacons will now shift their attention to a clash with Virginia Tech (5-3) in Blacksburg on Saturday at 3:30 p.m., in a game that could have massive implications for the Deacs’ bowl aspirations. Sitting at 7-1, Wake Forest has the second-best record in the ACC behind reigning national champions Clemson (9-0). In case of a win against the Hokies, they further solidify their position as the second-best team in the ACC and their chances to get to the Orange Bowl for the first time since 2006.

The Hokies are coming off a near upset of No. 15 Notre Dame in a 21-20 loss in South Bend. They forced three turnovers from the Irish, including a 98-yard fumble recovery touchdown by defensive back Divine Deablo. However, their offense failed to produce, managing only 240 total yards against a stout Notre Dame defense.

If Wake Forest wins on the road against Virginia Tech and Clemson beats NC State as expected, an 8-1 Wake Forest squad would be playing a 10-0 Clemson team in Death Valley for possibly the right to represent the Atlantic division in the ACC Championship Game.

It’s fair to say that their matchup with Virginia Tech has major season-defining implications for Wake Forest.

After answering many doubts and concerns about their performance by overmatching NC State, there’s only one real season-defining question facing the Demon Deacons ahead of their matchup against the Hokies: is this team good enough to get to the Orange Bowl?