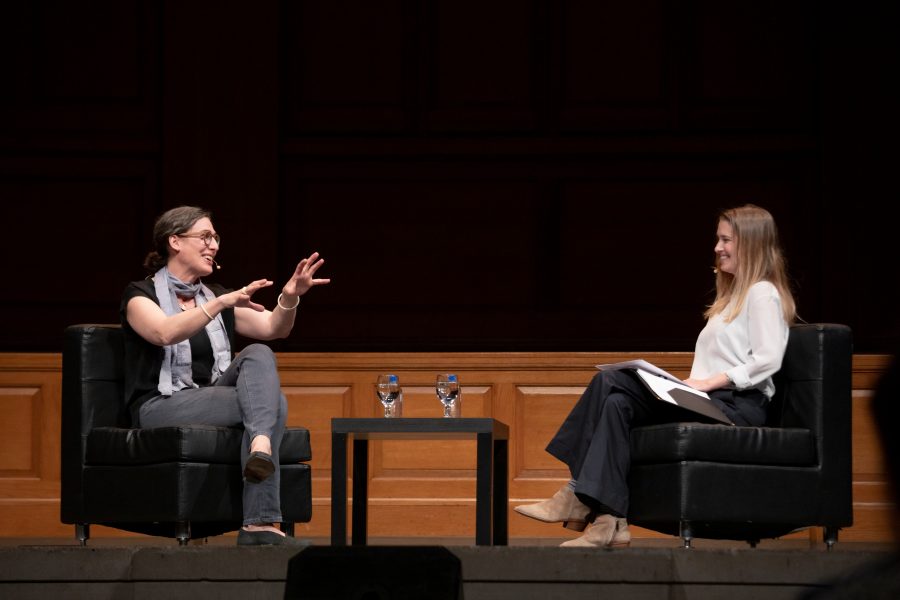 “I’m never sure of anything” is not something you’d expect to hear from one of Time magazine’s past “100 Most Influential People,” but Sarah Koenig, host of the popular podcast Serial, is okay with uncertainty.

Podcast pioneer Koenig spoke at Wake Forest on Nov. 4, sharing knowledge and expertise about her storytelling process with students, faculty and members of the Winston-Salem community. WFDD’s Bethany Chafin led “An Evening with Sarah Koenig” in Wait Chapel, in which Koenig answered questions about all three seasons of her critically acclaimed podcast, ending with a Q&A session. Serial is credited as the podcast that made podcasts cool, and as the host and co-creator, Koenig is an expert in the field.

Known for her relatability, quirky candor and commitment to telling all sides of the story, Koenig did not disappoint the audience on Monday, speaking openly and honestly about her personal experiences working on Serial.

Koenig didn’t leave much out, recounting the story of her success from the beginning. Starting her career as a newspaper journalist, Koenig told Chafin that she was on an assignment for the paper she was working for at the time when she stumbled across NPR’s This American Life on the radio.

“Why am I not doing this?” Koenig had wondered. Soon thereafter, she was, and it was at This American Life that she met producer Julie Snyder, to whom Koenig attributes much of her success. As Koenig explained in an interview with the Old Gold & Black, it was Snyder who came up with the idea of making a podcast in the first place. Snyder saw the podcast form as a perfect medium to experiment with.

“If it was a total failure, no one would hear it,” Koenig explained.

But, people did hear it: Serial has become the most listened-to podcast in the history of the form. After its wild success, Koenig told the Old Gold & Black that she and her team initially felt pressured to follow up season one with another crime piece, but that she wasn’t necessarily interested in crime.

Koenig is instead truly fascinated by criminal justice, and she stayed true to her interests in choosing which stories to tell in the consecutive seasons of Serial. She said that there have been several times when she’s begun a story and ultimately walked away from it because it no longer interests her. Koenig is not afraid to kill a story, even if it means walking away from a project that she’s invested six months into — which she has. If she’s not thoroughly interested in the story, she says it isn’t worth telling.

“If you’re interested in whatever you’re telling, your audience can hear that passion, and they’ll become interested, too,” Koenig said.

In her talk at Wait Chapel, Koenig also discussed the challenges that come with immersing herself in an environment for prolonged amounts of time as a journalist, wherein she must emerge with a story built from unbiased facts. She emphasized that, as a journalist, she is there to gather facts and tell a story, so she cannot advocate for any individual or issue, even with those to which she may feel personally connected.

Koenig also talked about this challenge in her interview with the Old Gold & Black, explaining that because she works in longform journalism, spending so much time with the characters of a story can make it difficult to maintain professional relationship boundaries.

“I don’t pretend that that [relationship] was purely professional,” she said of her relationship with Adnan Syed, the subject of Serial’s first season. “You know, like we would chat all the time and joke around, and you know like that’s fine.”

Koenig maintains that being upfront about her relationships in the beginning is key for setting expectations, so that whoever she’s working with understands that she is there to report the facts and not to help them. This honesty, Koenig said, is also important to her relationship with the audience. She said that while at times the audio of the show may sound unedited, as if the audience has access to every moment of every conversation relevant to the story, this candid storytelling is intentional. Koenig is strategically transparent with her audience, sharing as much context as is necessary for listeners to fully understand the story she’s telling.

“When I’m letting you in on something dumb that I say, or some moment where I giggle too much, or if I have misgivings, or if I’m rude to someone, there’s a reason you’re hearing that,” Koenig said to the Old Gold & Black. “There’s never just loops that slip by. You know, it’s calculated.”

She went on to further explain that the freedom to share so much of her experiences and thought processes with the audience is a privilege afforded to her by the podcast form, which allows her to experiment within the journalistic genre.

Serial also allows Koenig to feel comfortable expressing doubt, which is something she encourages as a journalist. Koenig explained that she is less concerned with personal feelings of certainty than she is about collecting and conveying facts.

“There is so much pressure to know in our world right now,” Koenig said in her conversation with Chafin. “Everybody always feels like they have to pick a side.”

But, as Koenig pointed out — it doesn’t have to be that way.