Deacs Advance To ACC Semifinals But Fall To UVA 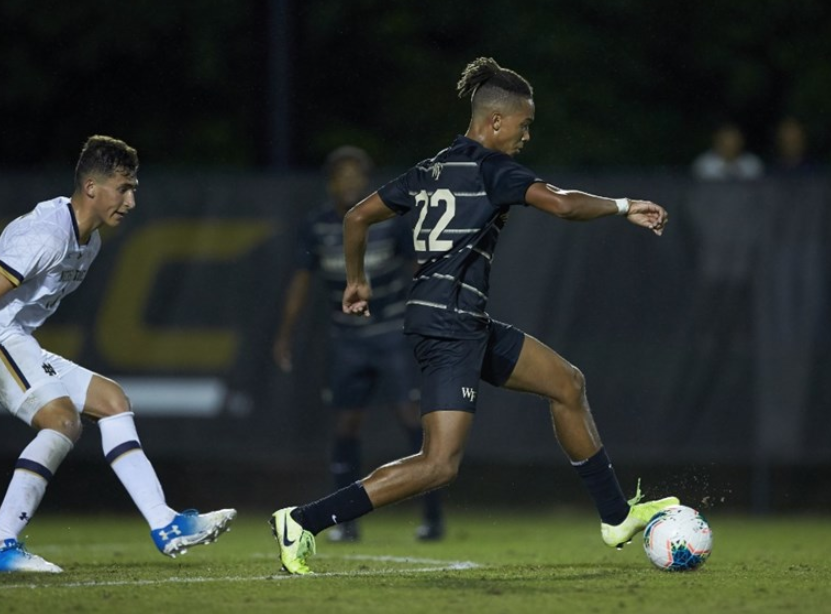 Playoffs can cause teams to experience the highest of highs and the lowest of lows. In their two ACC tournament matches, the Wake Forest men’s soccer team felt this dichotomy firsthand by beating Virginia Tech in a dramatic fashion before losing a close match in the semifinals to the University of Virginia.

In the quarterfinal matchup with Virginia Tech, Wake Forest’s dreams of advancing rested on the shoulders of goalie Dominic Peters.

After regular time ended in a 2-2 draw, neither side scored in overtime, which sent the match to penalty kicks.

The Deacs shot first and missed their opening penalty kick. Both sides then traded goals, and the shootout was tied at four apiece when Virginia Tech’s Kristo Strickler came up to the penalty mark. Had he scored, Virginia Tech would advance to the semifinals.

Strickler kicked a low hard shot towards the right side of the goal. Peters then dove to stop the ball in its tracks. With the season on the line, Dominic Peters stepped up and gave the Deacs a chance to win.

Wake Forest and Virginia Tech scored their next penalty kicks. Then, Machop Chol scored to put the Deacs up 6-5 in the shootout. On Virginia Tech’s ensuing penalty kick, the shot was hit towards the right center of the net. Peters moved towards the ball and batted it down away from the net to win the game for Wake Forest.

“I did all my best to get inside the player’s head,” Peters said when asked about the game-winning save. “Then it’s just a numbers game, can you read him well enough, can you guess the right side, and I was lucky enough to do so.”

Peters, a redshirt sophomore from Santa Clara, Calif., did not start the game in the goal for Wake Forest and only came in for starter Andrew Pannenberg for penalty kicks.

“Dom [Peters] was incredible in training,” said Wake Forest Head Coach Bobby Muuss. “[Peter’s] energy, his confidence, was the reason we made a decision.”

The score at the end of regulation was tied 2-2. Wake Forest’s Joey Dezart scored the first goal of the night in the 60th minute off of a corner kick. Isaiah Parente took the corner kick and passed the ball towards the top of the box. After a few hops, Dezart one-touched the ball and  hit a beautiful shot that curved into the upper left corner of the box.

Sixteen minutes later, the Deacs had their second goal after a brilliant display of passing in the box. Hernandez was at the top of the box and passed the ball to Harris who was making a run from the top corner towards the goal. Harris then deftly passed it by the goalie to the right where Holcomb was uncovered. Holcomb kicked the ball straight into the net to put Wake Forest up 2-0.

It seemed that the Deacs would win comfortably, but Virginia Tech mounted a comeback in the closing minutes. In the 78th minute, Virginia Tech’s James Kasak scored after his shot deflected off of a Wake Forest defender into the net. Then four minutes later, Virginia Tech’s Daniel Perrera scored off of a free kick that was two yards outside the box to even the game up and send it to overtime.

On Wednesday’s semifinal match against UVA, Wake Forest’s playoff run came to an end. It was a close match, but UVA’s early goal was all they needed in a 1-0 victory.

UVA’s goal came in the 25th minute and was scored by junior forward Nathaniel Crofts who was assisted by Robin Afamefuna and Daniel Steedman. Agamefuna was on the left side of the field between the 18 yard box and the sideline. He then crossed the ball into the box where it was deflected by Steedman toward Crofts. Off a bounce, Crofts fired the ball into the net.

Wake Forest was outshot 9-5 by UVA and only had one shot on target compared to UVA’s four.

Wake Forest’s next match will now wait for their NCAA Tournament seeding. The final will be played in Cary, N.C. this year, where the Deacs won the 2007 National Championship.