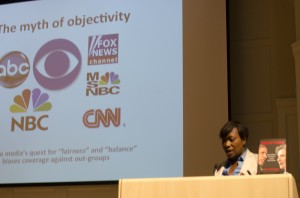 In a society of a multitude opinions, people are constantly on the lookout for “fair and balanced” news. Joy-Ann Reid, an MSNBC national correspondent, visited Wake Forest’s campus this past week through the Ida B. Wells Residency program of the Julia Cooper Center to discuss the concept of objectivity during a lecture on Wednesday, Oct. 14.

The talk began by explaining journalism’s long history of biased reporting, particularly against outgroups and minorities. From the reporting of lynchings to coverage of the Vietnam War, Reid provided several cases of subjective journalism. From there, she transitioned to more contemporary examples of ideologically backed reporting, citing the former President Clinton as, “the human embodiment of everything Republicans thought was wrong.”

Reid cited three fallacies as the primary problems with objectivity in the media in the 21st century, ranging from giving all arguments equal merit to pretending that an individual can be truly objective. The reason two individuals can consider two completely different news sources the ultimate source of fair and balanced news, Reid noted, is that individuals tend to believe that the source that most matches their own personal perspectives is the most objective.

Currently, the lack of diversity in mainstream journalism often leaves out perspectives of entire communities. As it is impossible for any individual to compartmentalize their identities to be completely objective, however, Reid suggested instead that we “strive for [more] representative news.”

Individuals have the power to shape the reporting of news through their social media accounts, she said, noting that citizen journalism is a rising trend that is here to stay. Although the accessibility to a wide variety of news sources on social media outlets allows individuals to surround themselves with only sources they agree with, citizen journalism can also, “challenge the curated media,” by becoming an informal check by the public to encourage accuracy and inclusivity, Reid noted.

Students left the talk with historical background regarding the topic of fair, balanced and objective media. As students look their Twitter feeds and news channels, they should consider where their sources are coming from and what perspectives they consider.