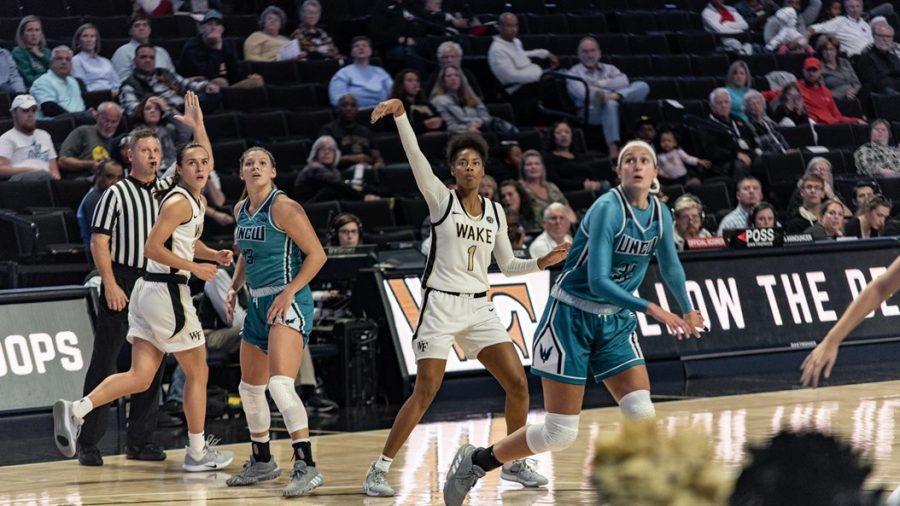 For the women’s basketball team, the 2018-19 season was a grueling campaign plagued by adversity at every stage. The squad was battered by a barrage of injuries, and often found themselves struggling to find enough healthy bodies to contend with the constant grind of an ACC schedule. Their record reflected these hardships, as the Deacs finished at 10-20, winning just one game during the entirety of ACC play.

This year, however, the Deacs look to rewrite their story. The offseason gave the squad a chance to heal, recharge and prepare for a reinvigorated 2019-2020 campaign. There’s no doubt the Deacs will play with chips on their shoulders, looking to erase the bitter memories from the past season.

“The team really has a new energy about themselves,” said Assistant Coach Dane Sparrow. “They have turned the page on last season and have really worked hard all summer long in preparation for this season.”

The Deacs’ roster is loaded with experience, as they graduated just two seniors following last year’s campaign. The plethora of returning players has resulted in a heightened sense of chemistry and camaraderie, a vital aspect in the success of any team.

“Team chemistry has been great,” Sparrow said.“I think they bonded a bit over the summer in the weight room. I think the girls like each other a lot, which is important in team dynamics.”

The Deacs will look to seniors Ona Udoh, Alex Sharp and Raegyn Branch, along with junior Gina Conti, for leadership. All four have tallied impressive careers to this point; Sharp was the team’s rebounding leader last season (9.3 RPG), while Conti was a wire-to-wire starter and dished out 147 assists to lead the squad. Udoh finished the 2018-2019 season shooting an impressive 59% from the field, while Branch appeared in 18 games and scored efficiently throughout the year, averaging 13.6 PPG. The roster also features a number of impressive young players who have drawn the attention of the coaching staff.

“I believe we have a great group of kids … and a set of freshmen that are very talented and have raised everyone’s level,” Sparrow said.

The Deacs will seek to utilize this intriguing mix of veteran leaders and young talent to make their presence felt against a talented slate of ACC opponents such as Louisville, Miami and NC State. While the difficulty of the schedule is undeniable, the rigorous collection of in-conference matchups will give the Deacs the opportunity to turn heads throughout the ACC.

The squad is off to a solid start this season, winning two of their first three matchups, including an eye-popping 106-50 home victory against Charleston in which Udoh logged 23 points on 10-13 shooting in just 19 minutes of play. The Deacs hit the hardwood again this Friday night at home against UNC-Charlotte, where they’ll attempt to bounce back from a heartbreaking two-point loss to UNC-Wilmington. ACC play begins on Dec. 29, when the Deacs venture southward to lock horns with the Miami Hurricanes.