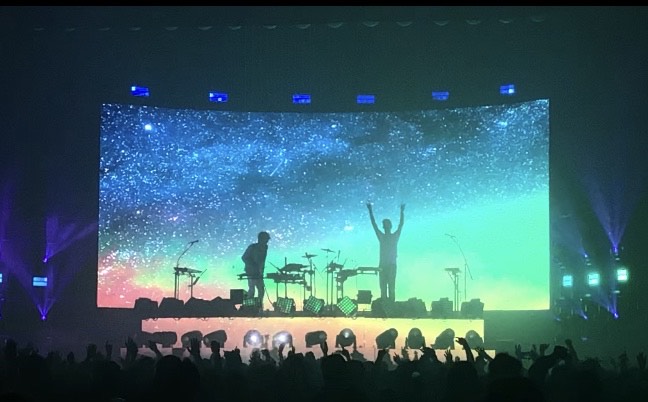 Louis The Child’s “Here For Now” Tour made its pit stop in North Carolina last Thursday. The Chicago-based DJ and production duo, 22-year-old Robby Hauldren and 21-year-old Frederic Kennett, is best known for their electronic pop hit singles “Better Not,” “It’s Strange,” “Love is Alive” and “Fire.” The talented young musicians brought their A-game to a diverse crowd at the U.S. Cellular Center in Asheville for their third show of the 2019 tour.

In an array of lights and trippy nature visuals flashing across the back screen, the producers took the stage with high energy, which was echoed by the enthusiastic crowd of mostly college-aged people and a few older couples scattered near the back. By starting off with one of their lesser-known songs and jamming on mirrored keyboard and xylophone sets, it felt like we were getting a sneak-peak into one of their bromance jam-sessions. Their energy never slowed, nor did that of the young crowd, many of whom were dressed in Coachella-like apparel.

The tall and lanky Hauldren, sporting an oversized white t-shirt and baseball cap, inspired a care-free vibe, with fluid and sporadic dance moves, that was emulated by all ages in the audience, including a group of 30-or-so Wake Forest seniors.

“It was incredible. Hauldren and Kennett just seemed so happy to be there and it made me happy too,” said senior Lauren Healy.

Mixed into the expected popular beats were some new electronic variations, including a mix-in of Chance the Rapper’s hit “All Night” accompanied by floral and jellyfish projections. At one point a quote by Jim Morrison, vocalist of the 70s rock band The Doors, popped up on screen that read: “I guess in four or five years, the new uh generations music. It might rely uh heavily on um electronics. I can kind of envision maybe like, one person with a lot of machines.” Concert-goers seemed to love this goofy mix-in, with at least five people being lifted onto shoulders as the quote flashed up.

Most of their songs encompass a smooth yet edgy EDM tone, but one of their intense future bass remixes of Ty$’s hip-hop anthem “Blasé” was definitely the main hit of the night, unleashing the stadium into a frenzy of fervor. A few favorites from their 2018 album “Kids At Play EP” were performed as well, including the edgy “Dear Sense” and quirky and bouncy mashup with Quinn XCII, “The City.” The captivating show was concluded with an encore that urged a repeat of their most recent popular hit, “Better Not,” a feel-good, clever blend of electronic beats.

The duo definitely impressed this weekend and proved that they are not burned out in their continued mixing of new unique material since their start in 2017 when Kennett was still in high school. They’ll be playing 18 more shows around the Midwest, East Coast and Canada, wrapping up in early December. If you have the chance, these inspiring and fresh EDM artists know how to put on a show that is definitely worth the $30 ticket.