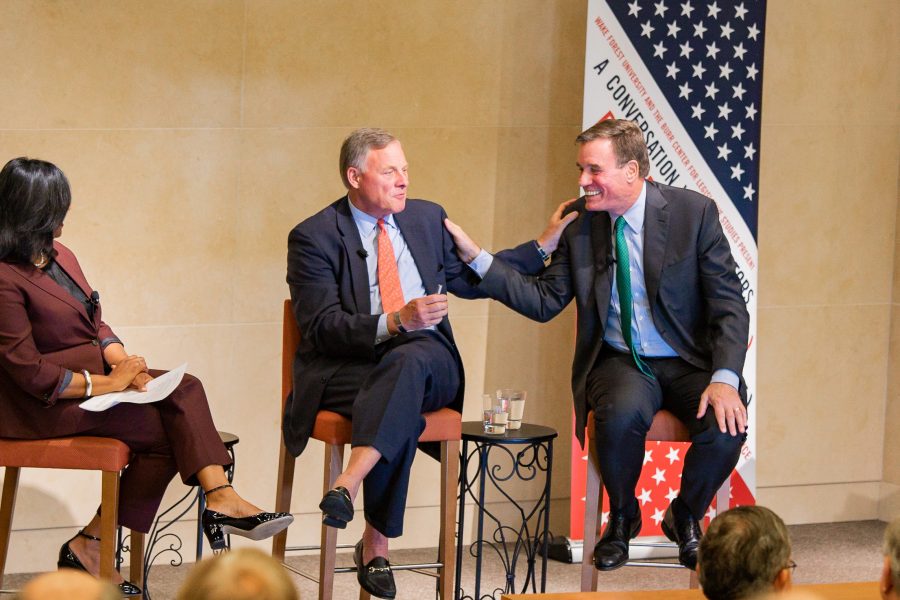 Senators Richard Burr and Mark Warner, Chair and Co-Chair of the Senate intelligence Committee, talk to the community at Wake Forest University on Monday, November 11, 2019.

As public impeachment hearings against President Donald Trump begin this week in the lower chamber of the U.S. Congress, the House Intelligence Committee has increasingly commanded the country’s attention.

Its counterpart in the upper chamber — the Senate Select Committee on Intelligence — has largely remained out of the spotlight, despite the fact that it has spent the past three years conducting a high-octane, bipartisan investigation into the extent of the Russian state’s interference in the 2016 election cycle.

On Monday night, however, Wake Forest students and members of the Winston-Salem public were offered a rare glimpse inside the heads of the Intelligence Committee’s two most senior members: Sens. Richard Burr (R-NC) and Mark Warner (D-VA), the Chairman and Ranking Member, respectively.

The senators addressed an audience of 400 in Broyhill Auditorium, analyzing bipartisan cooperation, foreign threats and impeachment in a discussion moderated by Kami Chavis, a professor and director of the Criminal Justice Program at the School of Law.

Both senators have long-standing connections to the university. Burr graduated from Wake Forest in 1978, and in 2018, he designated Wake Forest as the repository for all official records and documents associated with his two-decade career in the House of Representatives and the Senate. Warner delivered the university’s commencement address in 2006 and was awarded an honorary doctor of law degree.

The discussion marked the inaugural event presented by Wake Forest’s nascent Burr Center for Legislative Studies. According to a university press release circulated when Burr agreed to donate his congressional papers to Wake Forest, early plans for the Burr Center include attracting global leaders to the university for speaking engagements and interaction with students, enabling scholars to use the Burr papers for research and exploring ways for students and alumni to take advantage of the Wake Washington Center in Washington, D.C.

Although the senators hail from opposite ends of the political spectrum, their discussion repeatedly emphasized the importance of setting party affiliation aside in order to try to get things done in government. Burr and Warner both take pride in their bipartisan approach to running the Senate Intelligence Committee, especially in contrast to its counterpart in the House of Representatives, where Democratic chairman Rep. Adam Schiff is managing the impeachment inquiry. Rep. Devin Nunes, the ranking Republican, has deprecated the process as being “a bit like watching a cult.”

“What you see on the national media is not indicative of the relationships we have in Washington,” Burr said. “Now, Mark and I have a good relationship, but you would believe that 98 other people don’t … and the truth is, if that was the case, we would get nothing done, because the Senate rules allow one person to stop anything at any time. Twenty years from now, somebody will look at how we conducted the intelligence committee … and they will look at the precedent we set, and hopefully they will follow us.”

Senior Walter Jackson, a President’s Aide who was staffing the event, said that he valued the importance the senators had placed on their cooperation across party lines.

“I appreciated it when the senators emphasized the importance for ideologically opposed folks to work together when possible, even if it is on something small,” he said. “Past generations have usually had one or two big problems to deal with at a time. For example, for the baby boomers, it was the Cold War. My generation, however, has three or four big problems: climate change, automation and artificial intelligence, to name a few. Working together with those we disagree with, or compromise, will be a necessity if we are to address these challenges.”

Similarly, junior Jack Beyrer said, “Burr and Warner’s rapport was obvious, and it made for a fascinating and wide-ranging conversation. This kind of civil conversation across difference is undoubtedly something the Wake Forest community can learn from and apply to our own political culture.”

At the same time, Chavis challenged the confidence that Burr and Warner expressed about how their committee functions when she asked both senators to contend with the U.S. Congress’ 20% approval rating among the American public (measured in a recent Gallup poll).

“You all have painted a rosy picture of Washington,” she said. “You’ve said Washington is not broken, but those statistics suggest otherwise.”

Herein was an instance in which the senators’ pushed back against one another. Burr largely chalked up the negative public perception of Congress to the fact that “the majority of America just gets the news as an alert on their phone” and took a jab at the press, noting the proliferation of anonymous sources in journalism. In contrast, Warner acknowledged some of Congress’ responsibility for its unfavorable reputation.

“Some of those statistics, in terms of Congress’ approval, we’ve earned it,” he said. “It’s easy to hate Congress but love your congressman. When you don’t legislate most of the year and you wait for these great big hairy balls of mess that happen at the end of the year, whether it’s budget-wise, appropriations-wise or tax policy-wise, that is not a rational way to do business for the largest institution in the world.”

In view of the fact that public hearings begin this week in the House of Representatives to investigate Trump’s alleged actions to pressure the president of Ukraine to investigate a company linked to the son of Democratic presidential candidate Joe Biden, Chavis turned the conversation to the subject of impeachment. Burr, who as a congressman voted in 1998 to impeach President Bill Clinton for lying under oath about his affair with Monica Lewinksy, expressed his distaste for the process.

“I’ve been through impeachment,” he said. “Nobody wins. Period. End of sentence. No party wins. The American people don’t win.”

He identified an episode during the 2016 presidential campaign wherein audio recording surfaced of Trump talking about touching women inappropriately and trying to have sex with them.

“That did not rise to a threshold that people thought he was unqualified to be president,” Burr said.

He also cited frequent turnover among the United Kingdom’s prime ministers, arguing that it is impossible to do the work of government with frequent leadership changes.

He declined to speculate on possible outcomes of the inquiry due to the fact that he and Warner may one day serve as jurors in the case. (The House of Representatives votes on articles of impeachment and the Senate holds a trial.)

Warner said that the inquiry will force both members of Congress and the U.S. public to make judgments. He added that he was upset that elected officials on both sides of the aisle had already appeared to make up their minds about the president’s guilt or lack thereof.

“We need to take a deep breath and step back and recognize that this is as serious as it gets in our form of government,” he said. “We should be doing this with a sense of sobriety and seriousness.”

Other topics addressed by the senators included technological threats to the safety of U.S. elections, ways in which both parties can be more responsive to the needs of racial minorities and foreign threats to national security, particularly from Russia and China.

Reflecting on the Russian state’s interference in the 2016 election, Burr said, “I would say we’re blessed with the fact that they targeted elections and not the economy.”

As murmurs of disapproval spread around the crowd, Warner grinned and joked, “We’re not invited back much.”