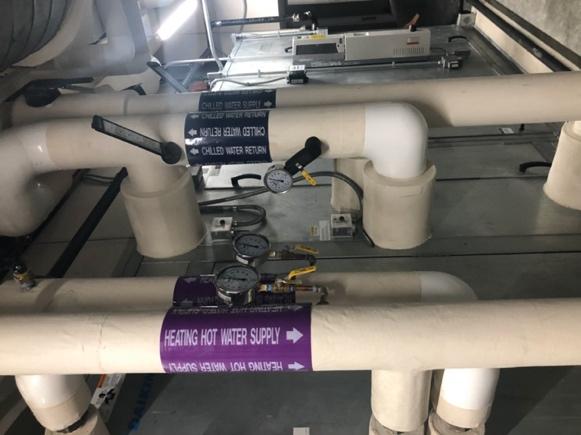 The heating and chilled-water plants are essential to providing about 75 buildings on the main campus of Wake Forest with three of the four central utilities: heating, cooling and water.

Students usually only think about these components when something isn’t working properly. In reality, running a university is equivalent to running a small city, which takes a large amount of energy and manpower. Supplying each building with the proper resources has a significant impact on not only campus sustainability and energy costs, but on the environment, too.

According to the United States Environmental Protection Agency, greenhouse gases (GHG) from human activities are the most significant driver of observed climate change since the mid-20th century. On a global scale, 25% of greenhouse gas emissions come from electricity and heat production.

The university purchases electricity, the other main utility, from Duke Energy, which accounts for 60% of the total carbon output on campus. About 21% of this electricity goes toward chilled water.

There are two active chilled-water plants on North and South Campus that generate cold water for cooling. The water leaves the plant on a campus loop distribution at 42 degrees and is recycled back to the plant at 52 degrees.

There is an overlaying optimization control sequence which monitors and controls the chilled water systems on campus. In other words, it sends the water out through campus in a way that maximizes efficiency.

The central heating plant houses four boilers that use natural gas to generate steam. The steam is then distributed across campus to heat the buildings and water used for sinks, showers, cooking and cleaning. There is also a plant on the northeast edge of campus with smaller steam boilers. The total connected campus capacity adds up to about 130,000 pounds of steam per hour, which sufficiently heats most of the buildings on campus.

“The plants are more efficient and much cleaner for the environment compared to using coal or oil,” said Tony Schallert, a facilities infrastructure engineer.

The central heating plant was the first place to be built on campus at Wake Forest. The boilers started out using coal as an energy source and then converted to natural gas about 30 years ago. Two new boilers have also been put in recently, and they are 10% more efficient than the old ones.

“There are two ways to save energy,” Draughn said. “Make it cheaper and use less of it.”

There has been a 30% reduction in GHG impacts at Wake Forest since 2007, according to Draughn. During this time, building space has grown by 44% — meaning the university has almost doubled the amount of energy being put out while also reducing its carbon emissions. Decreases in energy use per square foot have helped offset energy use from added space.

With the installation of the Sutton Sports Performance Center and Shah Basketball Complex, a new section of pipes had to be added to the underground system.

“One of the main things we are trying to do in raise awareness because we would like students to know more about how the buildings operate,” said Doug Ecklund, building systems manager.

Every call for Facilities & Maintenance gets sent to the operations room at the heating plant, where someone is always working 24/7 to make sure everything is functioning smoothly.

The Building Performance Improvement Initiative (BPI2) was created to help with campus engagement. Student tours of the heating plant are given when a professor reaches out and wants a class to come and see it. Students are shown informational slides, given a tour of the plant and taken into the underground tunnels that stretch across three miles of campus.

“Students can contribute to energy reduction by closing windows, turning off the lights when they leave rooms and learning how to correctly use a thermostat,” Schallert said.

“I would advise students not to crank their thermostats,” said Jimmy Nifong, manager of Utilities Operations. “Find a comfortable temperature and leave it there.”