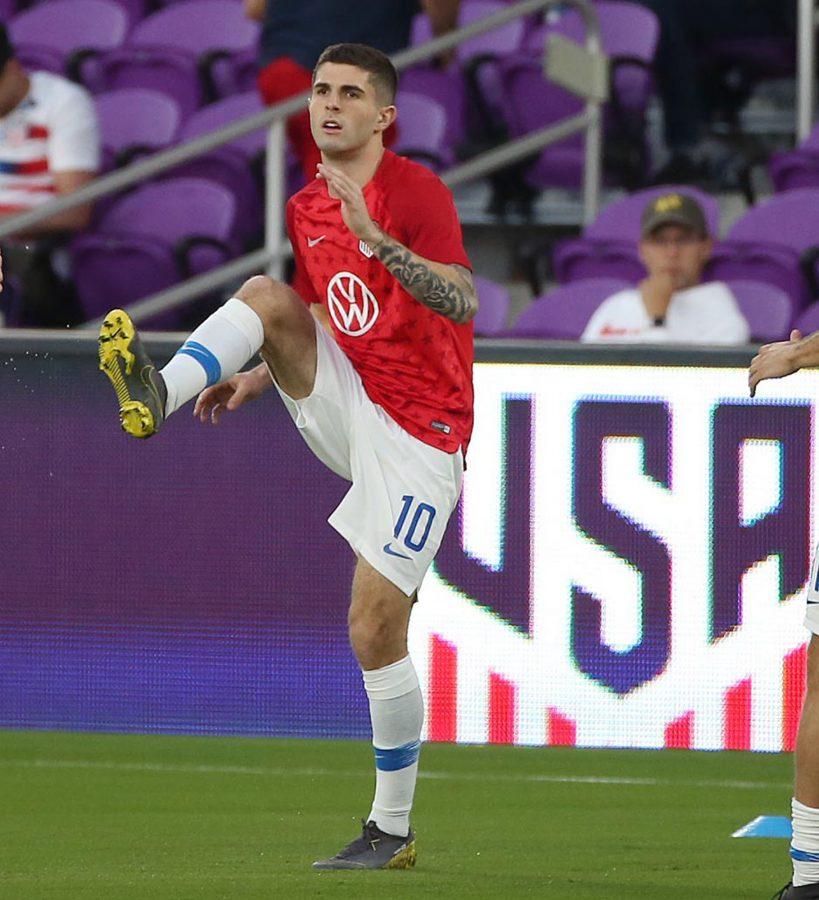 The USA men's national team's Christian Pulisic warms up before the start of a friendly against Ecuador at Orlando City Stadium on Thursday, March 21, 2019, in Orlando, Fla. (Stephen M. Dowell/Orlando Sentinel/TNS)

Since the 2003 acquisition of Chelsea by Russian oligarch and billionaire Roman Abramovich, the West London team has grown accustomed to success. Winning five Premier League titles, the ever-coveted UEFA Champions League (a competition of the best clubs in European football) and 10 other domestic trophies after the acquisition, Chelsea has experienced undoubtedly their best period of success. Yet at the outset of this 2019-20 Premier League season, this pattern seemed threatened. Chelsea faced a year-long transfer ban from FIFA for violations regarding the signing of academy players. Chelsea’s talisman Belgian winger Eden Hazard had left for Spanish giants Real Madrid, and Italian manager Maurizio Sarri departed after one season to Juventus.

All-time Chelsea leading scorer Frank Lampard was signed to manage the team, fresh off his first ever year at the helm at Derby County, playing in the second division of English soccer. Lampard’s job seemed impossible, with many Chelsea fans welcoming the season with low expectations and the hope that the young talent within the team would be able to salvage results.

Yet, Chelsea has managed to thrive in chaos, a fact made only sweeter by the struggles of the other London giants like Tottenham Hotspur and Arsenal. Chelsea’s Premier League season started with a disaster, a 0-4 thumping away at Manchester United, and was followed by a series of shaky results.

Since September, however, Chelsea has been dominant. Winners of their last six matches, Frank Lampard captured Manager of the Month for October, and the club currently sits at third in the Premier League, sandwiched between a resurgent Leicester City (winners of the 2016 Premier League) and defending champions Manchester City, with Liverpool currently leading the table by eight points.

The Champions League mirrors this success. Following an initial 1-0 defeat away at Valencia, Chelsea now occupies the top spot in their group, following two pivotal results against Dutch champions Ajax. After securing a 1-0 victory in Amsterdam, Chelsea and Ajax faced off in London on Nov. 5. Initially trailing 4-1, Chelsea capitalized on two Ajax red cards to secure a spectacular 4-4 draw.

The equalizing goal in the historic match was scored by Reece James, a 19-year-old defender, demonstrative of the dramatic shift at Chelsea that has excited fans and scared rivals. For years, Chelsea fans expressed frustration at the lack of youth involvement in the first-team. Chelsea’s youth team is consistently successful domestically and in Europe, yet there has always been a seeming inability to incorporate young players into the first-team. Certified world-class players such as Kevin De Bruyne, star of Manchester City, and Mohamad Salah, star of Liverpool, have tried and failed to cement a place in strong Chelsea sides as young players.

This season could not be more different, with young players as the core of the team. The starting 11 against Crystal Palace were Chelsea’s youngest ever in the league, averaging just 24 years of age among the starters. Mason Mount, who played under Lampard at Derby, has played like a seasoned midfielder alongside a resurgent Mateo Kovacic and Jorginho, but Mount is only 20. Mount even scored his first international goal for England in the international break. 22-year-old Tammy Abraham sits second in goals scored in the Premier League with 10, a fantastic tally for a striker starting in the Premier League for Chelsea for the first time. Young defenders Fikayo Tomori and Reece James, perhaps the most promising of Chelsea’s academy products, have bolstered a previously porous defense. Callum Hudson-Odoi re-signed with the club and remains the brightest attacking prospect.

Although not an academy player, 21-year-old American Christian Pulisic has proved invaluable following his $73 million transfer from German club Borussia Dortmund in January, a record for an American player. Playing off the left wing, Pulisic scored his first three Chelsea goals in stellar fashion, a perfect hat-trick against Burnley, resulting in “U.S.A” chants from the traveling Chelsea supporters. Since then, Pulisic has been stellar, scoring in three-straight Premier league games and creating chance after chance in the Champions league, while overcoming the doubts from the beginning of the season.

Chelsea’s position is far from secured, as they play Manchester City following the international break on Saturday. Yet their season thus far has blown past expectations while creating a young core of players seemingly with the world at their feet.