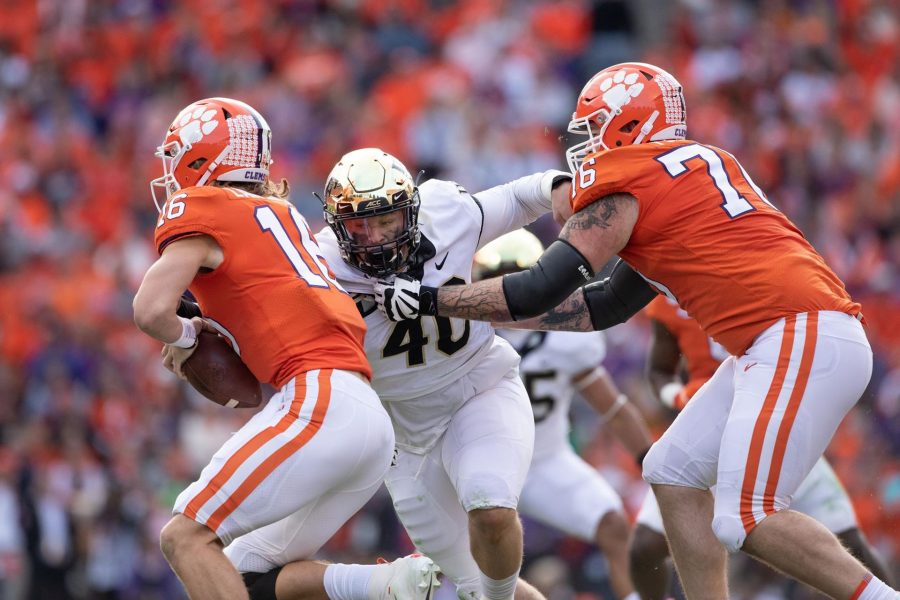 The Tigers jumped up to an early 14-0 lead with their first two possessions thanks to short field positions due to a Jamie Newman interception and a 53-yard return by Clemson receiver Amari Rodgers.

Wake Forest stopped the bleeding a little after a fumble by Clemson running back Will Spiers set them up at Clemson’s 28-yard line. The Demon Deacons came away with a field goal, which marked kicker Nick Sciba’s 28th straight made field goal, a new ACC record and the longest active mark in the nation.

However, after an encouraging end to the first quarter for the Deacs, Clemson went on to score 38 unanswered points, while limiting Wake Forest to mere 86 total yards for the remaining three quarters, en route a 52-3 blowout.

“I’m not at all happy with the result,” Head Coach Dave Clawson said, as reported by Les Johns from 247Sports. “We clearly didn’t play well. We had less than 100 yards of offense, but it was different than a year ago. I really thought last year that our kids quit, but they didn’t quit today. They competed.”

One of the bright spots for the Deacs, if you can really have a bright spot in a 49-point loss, was the defensive line play over the first two quarters. Wake Forest was able to collapse the pocket on Trevor Lawrence a couple of times and timely sacks by linebacker Ryan Smenda and lineman Rondell Bothroyd were huge to force punts by Clemson’s stellar offense early on.

However, the Wake Forest offense was unable to capitalize on any momentum generated by the defense, as the Deacs failed to generate at least a first down on six out of the nine offensive possessions they had during the first half.

Part of the offensive miscues were due to the absence of Scotty Washington and Sage Surratt, who caught 1,608 receiving yards over nine games this season.

“I would have loved to have had the challenge against [Clemson] at full strength. I would have loved to have had Scotty and Sage,” Clawson said, as reported by Les Johns 247Sports. “I don’t think those two players would have made a difference in the game, but some of those perimeter shots we take, I think those kids would have come up with a few of them. I think it would have been a more competitive game. This was a short-term loss for a long-term gain. A.T. Perry, Waydale Jones and Donavon Green will all be better because of this game.”

True freshman Donavon Green was the only one out of the trio able to register a catch against Clemson’s tight coverage. He caught two passes in back-to-back plays for 12 yards before Newman threw an interception on what would be his third throw to Green on the game.

This was by far Newman’s worst performance in his career leading the Demon Deacons. Newman was averaging 287.4 yards per game going into the Clemson game, but only managed to pass for 41 yards while completing only six out of 14 passes with two interceptions and zero touchdowns.

Despite the horrible loss, the Deacs might still have an outside chance to go to the Orange Bowl. If Wake Forest wins out their remaining games (Duke and Syracuse) and if Virginia Tech, Virginia and Pittsburgh finish the season with four losses or more, the Deacs might end the season as the second ACC team ranked in the CFP, behind Clemson, which would automatically send them to the Orange Bowl.

With Virginia Tech playing both Pittsburgh and UVA to end their season, this is a possible, albeit unlikely, scenario at this point.

The Deacs will now devote all of their attention to their 7:30 p.m. matchup at BB&T Field against the Blue Devils (4-6). Duke needs a win to keep their hopes of a bowl game alive, while Wake Forest can win the “state championship,” as they already have wins against North Carolina and NC State.

“We have Senior Day at home with that game on the ACC Network. It’s against Duke, big rivalry game, and this is a culmination to trying to win a state championship for us. It’ll be the eighth time in history if Wake Forest can pull off a win that we’ve had a state championship in Winston-Salem,” said redshirt senior tight end Jack Freudenthal. “[Duke is] a good football team, and we’re really excited, and all we have to do is focus on the game plan, do our jobs, control what we can control and if we can do that, it’ll be a really fun night for us.”