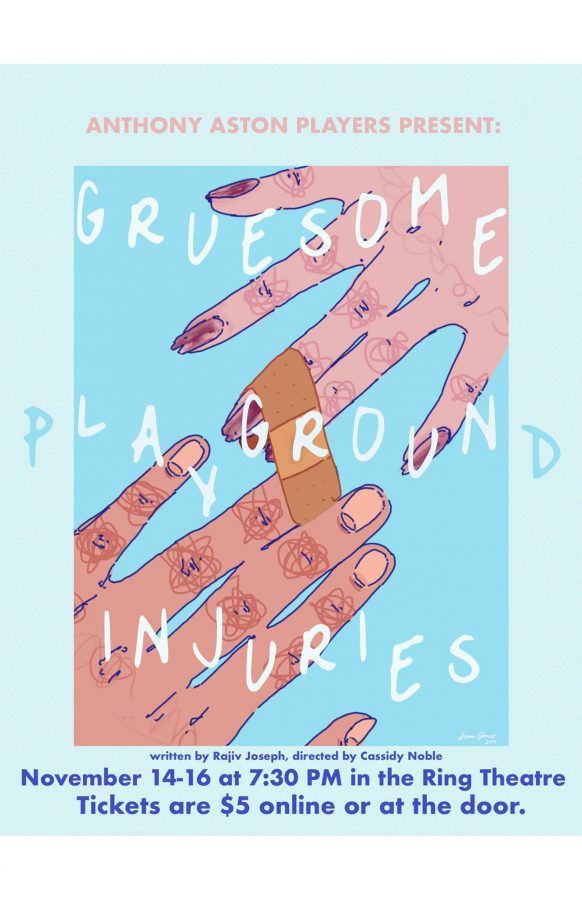 Last year as a sophomore, I took an acting workshop class for fun. The course was in conjunction with a directing class, so a majority of the class time was spent being guided by student directors in various scenes. I think I did three scenes over the course of the semester, but I only remember one. That last scene, which was essentially my final exam, was from a play I had never heard of before (to be fair, I was really only familiar with about two plays by then) called Gruesome Playground Injuries, written by Rajiv Joseph. All I remember of the scenes before the one from Gruesome was that one was dramatic and the other was comedic. The scene from Gruesome, though, was kind of like a mix of the other two. My scene partner and I played middle-school children (I often find myself playing children and choose to believe others when they tell me this is a good thing), and my character’s immature and boyish rowdiness paired with her decidedly unenthusiastic reactions made for some funny moments of slinging stinky socks and dancing like a fool. But, this scene also contained a sincere and intimate undertone that made the character work very intriguing and made acting in the scene rather challenging. Though, even after all the character work involved and reading the entire play, it wasn’t until seeing a full production this year that I realized what emotional weight the show really carried.

So, yes, it’s of course not by chance that I choose to write about Gruesome Playground Injuries now. I saw the production, directed by junior Cassidy Noble, last week and knew there was something to say about its depiction of such a rich and affecting relationship. Knowing just what to say, though, is tough. The show is an entirely non-linear story of Doug (senior Matthew Crawford) and Kayleen (freshman Cameron Michles) jumping between different stages in their life, ranging from adolescence to middle age. Though their development as people very dependent on each other, their relationship is not as simple as a deeply personal friendship or romance.

At several points, they are each in unique and conflicting stages of feeling a need for the other, but that feeling cannot be reciprocated due to mental or physical health or emotional resolve. There’s an intangible and largely implicit push and pull between Doug and Kayleen that is as deeply and instinctively understandable as a viewer as it is difficult to rationalize and outwardly discuss for the characters. Joseph’s script is of course beautifully accomplished in achieving this deeply complex relationship, but that troubling bond could not have been as candid as it was without performances like Crawford’s and Michles’ and directing like Noble’s.

Delving into Doug and Kayleen was surely a job of deeply connected teamwork as well as personal introspection. The actors’ abilities to depict people that were so varying in composition and condition, yet so consistently unique in character, and therein create clearly differentiable scenes was artful and greatly impressive. When I think back to my experience doing just one of the scenes from the play and how much subtle work was needed to tease out a sufficiently deep understanding of those characters, I realize how comparable the amount of total time spent was between my one scene and the full production’s entire show. An undoubtedly admirable amount of dedication and passionate work went into creating what resulted in such a resonating and human experience. I only wish I could tell you now that you can catch the show this weekend, but its run has come and gone.

The good news is that this wasn’t the first,  nor will it be the last show to have been so passionately built by those in the theater department. And this will not be the last time I write about the wonderful and valuable experiences that those in the arts at Wake Forest produce. I am continually impressed and moved by what those creative minds make with the intent to motivate a widened understanding in others, emotional or otherwise. And I will, as always, continue to look forward to what’s next.