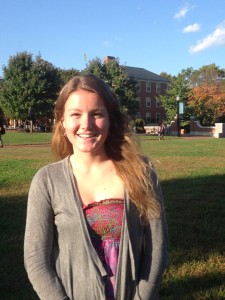 Bischoff’s love of running and philanthropy made Hit the Bricks an ideal way for her to get involved on campus.

Bishcoff is also a shift leader for Campus Kitchen and participates in the campus running club, in addition to her sorority, Delta Zeta. She is an economics and Spanish double major and hopes to work as a consultant or analyst.

What first led you to become involved with Hit the Bricks?

I’m a runner, and I was really involved with [running] in high school. I actually ran the Chicago marathon on Sunday and I’m still sore. I wanted to stay involved with running and I’ve always loved philanthropy, so I thought [Hit the Bricks] was kind of the perfect [mix].

My freshman year when I went to Hit the Bricks, my hall had a team and that was the first time that I really felt like I belonged and fit in at Wake.

Last year I was a committee chair and this year I was an overall chair, so it’s been fun to kind of work my way up and be involved at all levels.

Besides the running part, which is why I was originally drawn to it, I just liked how the whole community came together, both faculty and students, to fight together for this one cause. It’s sort of like differences are forgotten and I really liked that vibe. It’s just a great atmosphere the entire day.

How successful was the Hit the Bricks event this year?

So far this year, we’ve reached our goals.We had 100 teams and over 1,000 participants, which doesn’t include everyone else who was just there hanging out.

This was the first year we’ve had 100 teams, which was awesome since that’s been our goal for a few years.

I’m excited to do it again next year and hopefully increase the donations again.

We’ve also really picked up on our faculty team members.

The business school had five or six teams and a lot more departments are starting to participate.

Next year our goal is to get more freshman hall involvement. We also definitely want to get more teams again and increase the participation.

Were there any changes the executive board made to facilitate the increase in donations this year?

This year, we completely re-did the website and one of the reasons we made more money this year was because now you can just donate on the website.

Before, you couldn’t do that, so that made things a lot easier. This new website was a big process and a lot of work and credit for that goes to Nick Ladd.

What does being a member of the Hit the Bricks executive board consist of?

We have a lot of meetings with departments in the school. There’s honestly too many departments to name because people are just so helpful with Hit the Bricks.

That’s one of the main things I realized: if you send an e-mail saying you’re with Hit the Bricks, people are going to help you out.

Also every hour of Hit the Bricks, we had free food from someone in the community, so it involves a lot of reaching out to them.

What have you learned from being on the executive committee so far?

I’ve definitely learned that it’s important to delegate tasks to other people. You can’t do it all. When I was a freshman, I sort of tried to do it all and when I got more involved with Hit the Bricks and Campus Kitchen, I had to pick and choose which organizations I wanted to stay really involved with.

Hit the Bricks is the most important thing I’m doing and I went into it knowing I was making that [time] commitment.

I’ve needed to prioritize my classes versus Hit the Bricks because there’s a lot of pressure to put Hit the Bricks first, because your grades are your personal thing but Hit the Bricks is the whole Wake Forest community. So I definitely have to put [academics] first for a little bit.

Also, I think that having such a large leadership role on campus just teaches you responsibility and tact.

It teaches you how to priortize goals and how to deal with situations of trying to appease everyone.

Even though my work with Hit the Bricks isn’t specific to my major, it has definitely taught me a lot of life skills.

Did you have to sacrifice anything for the success of Hit the Bricks?

It was definitely a little bit of self-sacrifice with my social life. But in the end it was all worth it because it helped the Wake Forest community raise over $40,000 for the Brian Piccolo Cancer Research Fund and that’s way more important than missing a dinner with friends. It’ll definitely be the highlight of my Wake experience.

I actually thought I’d be more stressed out doing it, but it’s so rewarding that it was not that stressful and I just enjoyed it a lot.

What has been the best part of your Wake  Forest experience outside of Hit the Bricks?

I love the friends that I’ve made here, and the professors that I’ve met. When I came into college I thought the professors would be scary people that you can’t really talk to, but I love how open they are and how much they really want to help you.

Every professor that I’ve had here has been so open with office hours and personal advice in general. Getting lunch and coffee with them is something I love doing.

I’ve met a great group of friends here who are super supportive of me and my crazy business so I really appreciate them as well.

Any advice for students also wanting to get involved on campus?

Find something you love and then throw yourself into it. You’ll eventually start getting leadership positions and then you’ll work yourself up.

If you distinguish yourself as a freshman and just put yourself out there, you’ll stand out because that’s not something that a lot of people do.