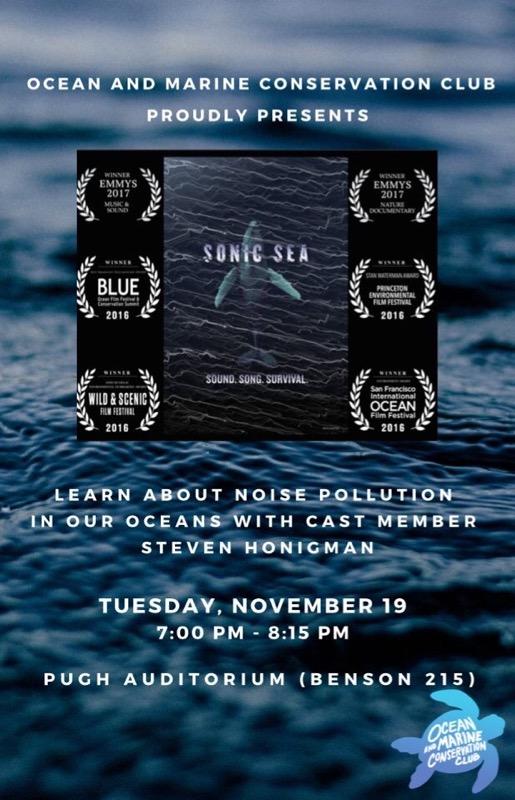 On Tuesday evening, students, biology professors, Sustainability Office representatives and more gathered in Pugh Auditorium for an event hosted by the Ocean Marine Conservation Club (OMCC). The event was a screening of the Emmy Award-winning documentary Sonic Sea, followed by a Q&A session with cast member Steven Honigman.

A brief introduction of Honigman, the former General Counsel of the Navy and recipient of the Department of the Navy Distinguished Public Service Award, was followed by the screening. The film immediately took the audience into the depths of the ocean with serene footage of whales and vivid graphics depicting the sonar waves emitted from industrial and military ships that are detrimental to marine life.

“We are acoustically bleaching the ocean,” actress Rachel McAdams narrated over imagery of beached whales and dolphins, a result of the species trying to escape the excruciatingly loud human-made noise.

“Most people think of pollution in very tangible forms like plastic in the ocean or smog in the air,” said co-founder of the OMCC Oliver Hawkes. “But we don’t really think of other pollution such as light and sound, and so we really thought this film did an excellent job showing this impact that humans have on the environment and that not a lot of people were aware of — that I wasn’t even aware of.”

The film produced an impressive variety of interviewees, including oceanographer and National Geographic explorer Sylvia Earle, a Norwegian fisherman, leading senior scientists and the guest of honor, Steven Honigman.

Honigman appears towards the end of the film to address the issue of naval ships releasing sonar waves to detect enemy submarines.

“I don’t believe that national security and environmental protection are inconsistent at all,” he says in the film. “I think there has to be a combination between those two principles where the Navy can operate in a way that has the minimal impact upon the environment and still perform its training, and if necessary, its mission.”

Following the film, co-founders Hawkes and Libby Mohn led a panel on stage where they discussed how Wake Forest students can help reduce noise pollution in the ocean.

“You go out and you vote; you elect the right people that help the Navy do what it would like to do to be a responsible steward,” Honigman said. “If you convince people that they want to go on ships that want to be quieter, if you try to convince companies that import goods into America that they want to use ships that are quieter, that’s a way that everybody can have an impact on pulling change in the right direction.”

Honigman seemed eager to motivate younger generations to make change. He addressed the crowd not only as a politician and Navy veteran, but also as an environmental activist, explaining the importance of saving marine life given the fact that over a single whales’ lifetime, it absorbs carbon equal to thousands of trees.

“I thought it was really cool to have [Honigman] there because he put his law degree to such an interesting use,” said senior Emma McCauley. “You don’t see a lot of people with law degrees and then go work for the military end up being environmental activists. That was really inspiring because I know there were a lot of seniors in the audience, and we’re on the cusp of graduation and seeing that just because you take one path doesn’t mean you’re set to be in corporate forever — you can still be an activist no matter what.”

When asked by a professor in the audience how long it could take to reduce the noise, Honigman had an optimistic answer, saying that while plastic and the warming of the planet are incredibly complex issues that could take decades and are irreversible, ocean noise can simply just stop or be massively reduced.

“I appreciated how [Honigman] ended on a really good note in saying how sound in the oceans, which is causing so much harm to the marine animals, is a problem that we can solve,” Hawkes said. “It is very much within our grasp as a generation, especially among young students at Wake Forest. Unlike smog that takes a lot of time and effort, sound is something that we can solve tomorrow if we put the right technology and the right regulations in place.”