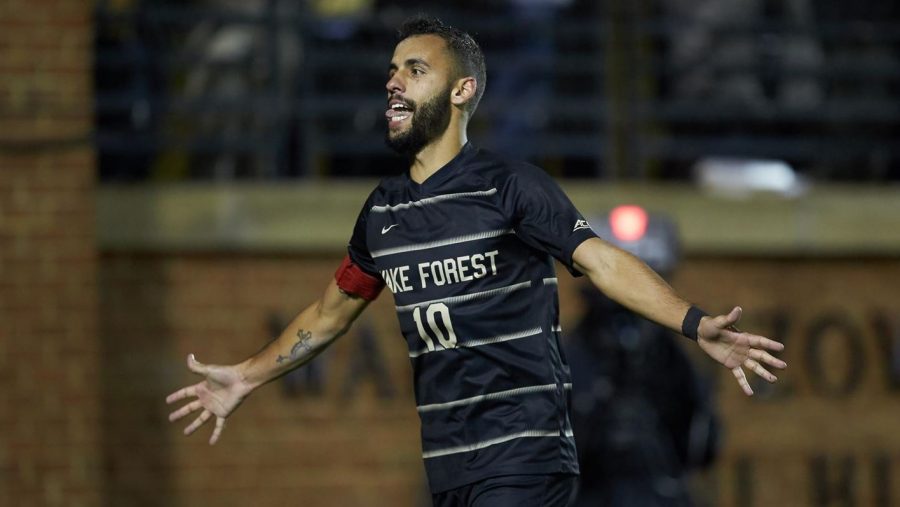 In the playoffs, the phrase “survive and advance” is often used. In their first two games of the NCAA tournament, the Wake Forest men’s soccer team has changed the phrase to annihilate and advance, beating Maryland and Michigan by a combined score of 6-1.

The wins were especially impressive considering the injuries the Deacs have recently faced. Midfielders Justin McMaster and Aristotle Zarris were unavailable for both games, and midfielder Joey DeZart missed the Michigan game.

Bruno Lapa ended Maryland’s streak of defensive perfection with a goal in the 26th minute. Off a corner kick, Isaiah Parente passed the ball 5-10 yards in front of the box which allowed DeZart to run up and hit a hard shot. The ball deflected off a group of Maryland defenders and bounced a few yards to the right of the goal. Lapa then made a run at the ball and one-touched it with his right foot to send it into the net and give Wake Forest a 1-0 lead.

Wake Forest finished the half with five shots and held onto the lead against a physical Maryland team that had racked up 10 fouls.

The Deacs came roaring out of the gate in the second half and scored in the first five minutes. Parente dribbled and took a stutter step in front of the box and passed the ball toward the center. The deft pass allowed Machop Chol to meet the ball in stride, one-touch it with his right foot and sail it past the goalie who was only a foot or two in front of him.

Wake Forest’s final goal of the night, in the 89th minute, was the cherry on top of an excellent all-around performance for the Deacs. Fifth year senior Tater Rennhack gave sophomore Kyle Holcomb a beautiful pass in front of the net that he sent past the goalie to give Wake Forest the 3-0 victory.

Wake Forest Head Coach Bobby Muuss was suspended for the game because of a red card received in last season’s NCAA tournament loss to Akron.

Muuss was back for the second tournament game against Big Ten runner-up Michigan and the Deacs won 3-1. Michigan came into the match playing well on the defensive side of the field, allowing only one goal in the Big Ten tournament and shutting out Wright State in its first NCAA tournament game. Additionally, Michigan tied its program record for fewest goals allowed in a season (18).

It was an evenly matched first half. Wake Forest had a 5-4 advantage on shots, while Michigan had a 1-0 advantage on corner kicks. Wake Forest goalie Andrew Pannenberg made a spectacular save in the 24th minute.

Wake Forest broke through in the 50th minute with a goal from Holcomb. Chol was dribbling down the right sideline and nutmegged a defender. He then crossed the ball into the box where Holcomb headed it perfectly to give Wake Forest a 1-0 lead.

In the 70th minute, Lapa was taken down in the box which earned the Deacs a penalty kick. Lapa took the kick himself and hit the ball hard and on the ground to the right, while the keeper dove in the opposite direction to make the score 2-0.

However, Michigan did not go down without a fight. Sophomore Derick Broche scored in the 77th minute off a rebound to cut the deficit in half.

The Deacs answered in the 84th minute with Holcomb netting his second goal of the day. Rennhack retained the ball between the right sideline and the 18-yard box then crossed it into the box. While the cross was in the air, Holcomb one-touched it over the goalie. With that goal, Wake Forest took a 3-1 lead and punched their ticket to the quarterfinals.

“What a gutsy performance. When they came back and scored and it was 2-1, a lot of teams would’ve been a little uneasy, but we got better,” Muuss said. “I think we managed the game at the end very well.”

Wake Forest will now take on UC-Santa Barbara on Dec. 7 at 7 p.m. at Spry Stadium. UCSB has had a Cinderella run in the tournament, beating No. 12 St. Mary’s and No. 5 and Big Ten champion Indiana. Hopefully the clock strikes midnight on UCSB’s run and the Deacs continue their exceptional play to move onto the College Cup.