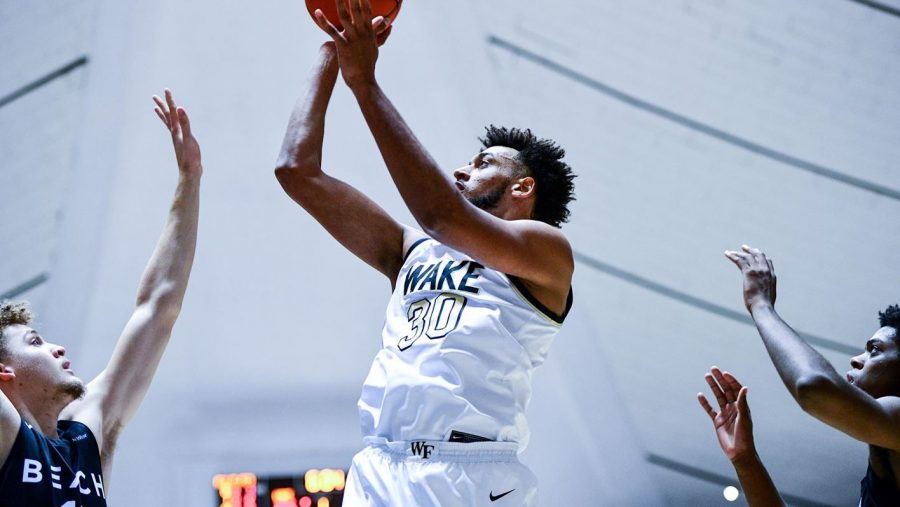 Wake Forest men’s basketball turned in a strong showing at the Wooden Legacy Tournament in Anaheim, Calif., this past week. The Demon Deacons won their first two games to reach the tournament final, where they couldn’t overcome the talent of No. 12 Arizona.

Wake Forest began the tournament on Thanksgiving with a win over the College of Charleston, 65-56. Having a 21-27 shooting performance from the free-throw line was crucial for the Deacs, as they pulled away late in the second half.

Thriving in his new bench role, Olivier Sarr put up a double-double with 14 points and 14 rebounds. Torry Johnson contributed 13 of his own. Wake Forest was also able to hold Charleston’s star guard Grant Riller to just 11 points, as opposed to his season average of more than 20.

Free-throw shooting and Sarr were significant boosts for the Deacs once again on Friday against Long Beach State. The 49ers upset Providence in their opening game, making Wake Forest’s path to the championship a bit less intimidating. The Deacs size and experience were too much for LBSU to overcome, and they steadily extended their second-half lead to come away with an 88-75 victory.

“Wake Forest controlled that game,” said Long Beach State Head Coach Dan Monson. “We could never really make a run because we just couldn’t keep them off the foul line or keep them from offensive rebounds.”

The Deacs secured 19 offensive boards, which turned into 20 second-chance points. They also set a Wooden Legacy record with a 96% conversion clip from the charity stripe in the contest, making 24 of their 25 attempts.

Sarr delivered another strong performance with 16 points and eight rebounds. Brandon Childress led the team in scoring with 17 and was joined in double figures by Isaiah Mucius, Torry Johnson, Andrien White and Chaundee Brown.

While the first two wins in the tournament were admirable, the opponents weren’t of a very high caliber. The real test came Sunday night in the championship matchup against the undefeated Arizona Wildcats.

The Wildcats led by as much as 15 in the second half, but Wake Forest was able to trim the deficit to just four with under a minute left. Ultimately, Arizona won the tournament with a 73-66 victory. Sarr came up big once again with a 21 and 13 double-double, and Childress scored 19. The performance should be looked at as a positive by Demon Deacon fans, however. Considering the amount of blowout losses the team experienced last season, to take a powerhouse program like Arizona down to the wire is definitely a sign of improvement.

Sarr won ACC Player of the Week honors for his outstanding efforts in the tournament. He averaged 17 points and 11.7 rebounds across the three games. He is the first Wake Forest player to win the award since John Collins did three seasons ago in 2017.

“He was a presence inside in all three games and was productive on both ends of the court,” said Head Coach Danny Manning. “To average a double-double and set career highs in points and rebounds in a tournament like the Wooden Legacy shows how his game has developed, and we look forward to seeing him continue to improve.”

Unfortunately, the West Coast trip has been tainted by an incident that came to light on Twitter Sunday, which resulted in freshman Jahcobi Neath and sophomore Mikey Wynn being held out of the Arizona game. The two players allegedly used offensive language, including a homophobic slur, directed at a Disneyland employee.

After taking on Penn State in the ACC Big 10 Challenge on Dec. 4, Wake Forest welcomes rival NC State to the LJVM at 2 p.m. on Saturday.