The Special One Returns To England 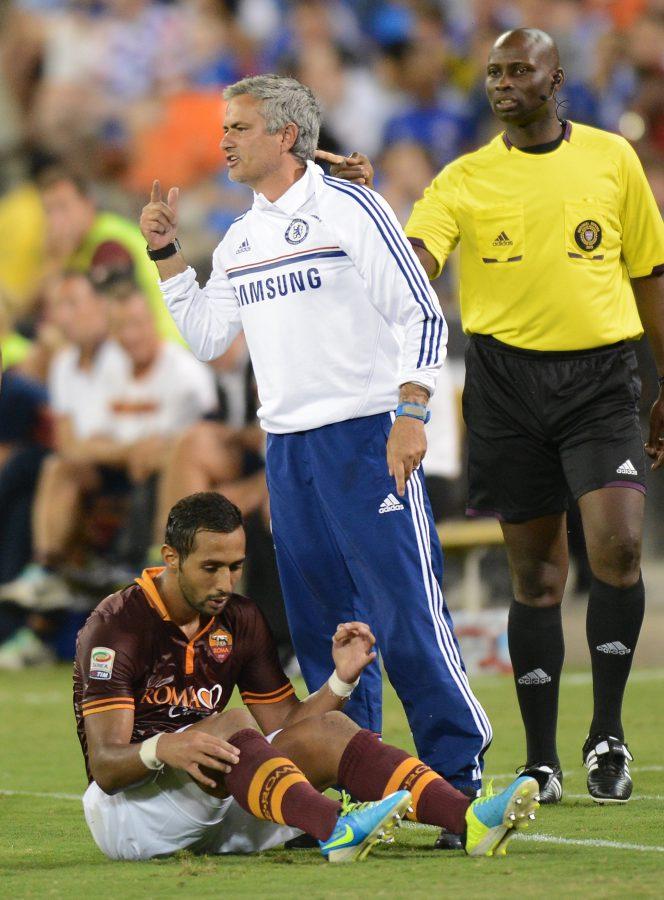 Chelsea FC coach Jose Mourinho signals to his players as AS Roma forward Mehdi Denatia (17) sits on the pitch below him in the second half of an internationals friendly at RFK Stadium in Washington, D.C., Saturday, August 10, 2013. Chelsea defeated Roma 2-1. (Chuck Myers/MCT)

Nearly six months earlier, Pochettino seemed on top of the world. Tottenham had defeated titan Manchester City and had secured a legendary win in the waning minutes against Dutch side Ajax to reach the Champions League Final. Yet, Tottenham’s European success could not prevent the end of Pochettino’s five-and-a-half-year reign in charge of the North London club following a lackluster start to the season, with Tottenham sitting at 14th in the league at the time of his firing, coupled with a series of disastrous defeats including a 7-2 drubbing at home against Bayern Munich.

The initial shock at Pochettino’s departure was quickly eclipsed by the news of his replacement, the Portuguese manager Jose Mourinho. Mourinho is a proven winner, the most successful manager of this generation and an unlikely pairing for the historically stingy Tottenham.

The Portuguese manager’s success is unquestionable, both domestically and at the continental level. Mourinho’s managerial breakout occurred when his 2004 Porto side shocked the world by winning the UEFA Champions League. Mourinho’s first spell in England was with Chelsea, taking them to the top of English football with a defensive unit that conceded a record low of 15 Premier League goals in Chelsea’s 2004-2005 championship season. Everywhere Mourinho goes, success follows, winning leagues with every club he managed since 2003 across four countries, before his title-less tenure at Manchester United, his last job before taking charge of Tottenham.

Mourinho has long been defined by a supposed emphasis on defensive soccer, with the clearest example being the 2010 Champions League-winning Inter Milan side that defeated Pep Guardiola’s Barcelona through a second leg semifinal performance that saw Inter complete just 67 passes to Barca’s 555.

Mourinho’s long ball emphasis has reemerged at Tottenham, with center-back Toby Alderweireld playing two fantastic passes from the back to set up Tottenham’s first two goals against Bournemouth.

Additionally, Mourinho’s antics are notable, with his “special one” moniker demonstrating both his success and ego. His on-pitch celebrations are the stuff of legend, yet his larger than life personality can be detrimental, as his United tenure was marked by an increasingly fraught relationship with star Paul Pogba. Mourinho has long had a complicated relationship with the media, which he demanded to respect him in the midst of his tumultuous final season at Manchester United.

Tottenham poses an unfamiliar challenge for Mourinho, as a club both not used to success, long in the shadow of North London neighbors Arsenal, and an owner adverse to the vast transfer fees that Mourinho has relied upon to build his teams.

Mourinho’s start has been excellent, winning his three out of its first four matches this is more a testament to the resources at his disposal than his tactical changes but also indicative of the heights he hopes to take the club to.

Tottenham’s attack is robust, with Mourinho full of praise for English striker Harry Kane, whom he called the best striker in Europe, and Korean winger Heung-min Son. Perhaps Mourinho’s biggest task is securing a return to form for Dele Alli, the 23-year-old English midfielder once heralded as the future of the position. After joining Tottenham at just 18, Alli dominated the midfield securing back to back double-digit goal seasons, including an 18 goal season and excluding a nine-goal, seven-assist season. Yet, Alli’s form has dipped in the past two seasons, even costing him his place in Gareth Southgate’s England team. Alli appears revitalized under Mourinho’s guise, scoring twice against Bournemouth and demonstrating the scorer’s eye that had captivated fans and neutrals alike.

Much of Mourinho’s success will depend on the upcoming January transfer window. Tottenham has long been plagued by a lack of depth, a problem only exacerbated by the growing age and inconsistency of their two Belgian center backs Alderweireld and Jan Vertonghen as well as the lack of solid fullbacks.  Danish attacking midfielder Christian Eriksen, long one of the best midfielders in the league, seems set to leave. Mourinho will surely hope that he can bring in fresh faces and much needed defensive depth over the winter window.

Should Mourinho implant his tactical vision on the team, a vision he hopes is supported by Executive Chairman Daniel Levy, the Premier League will return to respecting and fearing its most endeared villain, the ever-entertaining “special one.”