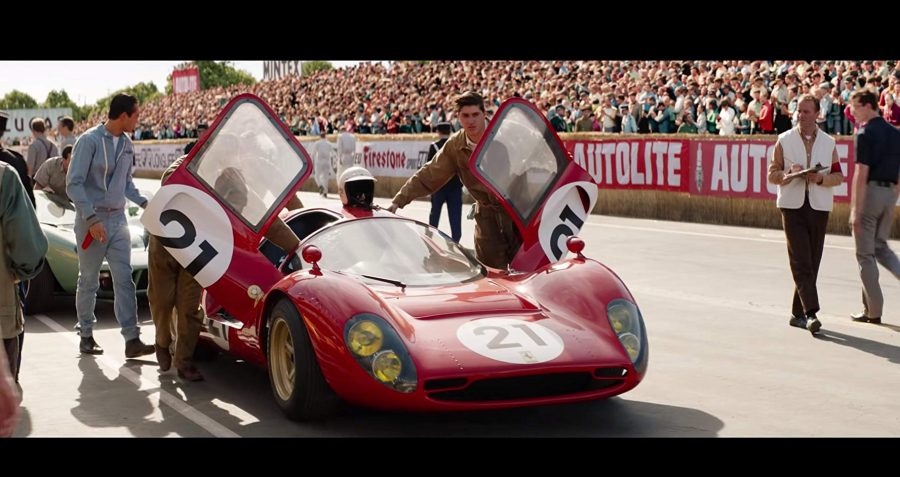 I saw Ford v Ferrari with two car junkies, though their jitters through the previews quickly settled into polite interest as the film proved, by most metrics, to be standard fare. There’s little antiquing in the film, because it’s not a car show, which might have made it more interesting. It’s more a series of Cars-esque racing sequences, padded with a few grandiloquent speeches, trade minutiae played as comedy and interesting historical circumstances. Ford v Ferrari, written by Jez and John-Henry Butterworth and directed by the venerable James Mangold (Walk the Line, 3:10 to Yuma), is a by-the-numbers cultural artifact that capitalizes on its speed-laced pleasures to keep you thinly, though never painfully, engaged. The requisite metaphors about cars revving our own sexual engines, plus their anthropomorphized sensitivities, resonate as serviceable but well-worn tropes, seemingly plopped into the story to give it reflexivity. To take us into the cranky, killjoy territory that reveals cars to be just an outgrowth of mortal fear doesn’t seem appropriate, but I’ll do it anyway. Here’s Ortega y Gassat: “It is precisely because man’s vital time is limited, precisely because he is mortal, that he needs to triumph over distance and delay. For an immortal being, the motorcar would have no meaning.” This doesn’t mean that Tesla wasn’t worth splurging for, just that it belies a deep-seated something.

That said, though I was, by virtue of my birth, freed from the need for speed, Mangold’s film is exhilarating enough to watch — cars are tracked by cameras creatively proximate to them, in rope-a-dope, up-and-back motions, and the cinematography feels a bit borrowed from Pixar, with its head-out-the-window immediacy. But nonetheless, it has force and grip, a kind of taut, centripetal intensity that remains enthralling. I wondered, quite often, where exactly they stationed these mobile cameras, or if they had to resort to CGI. The thrill was lodged somewhere in-between any certainty.

Story-wise, Ford v Ferrari follows Carroll Shelby (Matt Damon) as he tries to raise Ford, the symbol of the gray-flannel car, to the racing caliber of Enzo Ferrari and his (literally) hand-crafted works of art. Though Ferrari produces less cars in a year than Ford produces in a day (so says Ford VP Leo Beebe, played by a simultaneously staid and unctuous Josh Lucas — a performance oozing invidious control), Ford wishes to best them at the world-famous race at Le Mans. Shelby, the only American to ever win Le Mans, is brought in to ratchet up the creativity. Ford needs technical novelty, but also sex appeal, to convince a new, moneyed generation, saturated by images of Sophia Loren and her coevals, that Ford can compete with its aesthetic superiors. Henry Ford II (Tracy Letts, relying on his staccato-boss-man style from The Big Short) a bellowing, irascible and majorly-insecure magnate, is tired of taking a “Chevy up the tailpipe” and thinks a Le Mans win will re-brand Ford’s image as the American Ferrari. I’ll tell you that, though the story ends positively, my dad’s 2018 Ford Fusion would beg posterity to differ.

Shelby, hired as Ford’s front-man to promote as well as invent, is the kind of simply-assembled soul who prefers to “leave the yaking to the college boys,” as he says in his immolating project-launch speech, and prefers to experience life through the language that precedes all language: motion. Unfortunately, Shelby has a heart condition, but his oldest friend, Ken Miles (Christian Bale), doesn’t, and Shelby thinks he’s the driver for the job. Miles, an ornery but unquestionable talent, knows gears, motors and chassis like Shakespeare knows English. His driving is a form of endless inventing. But his personality is out of line with Ford’s steady-eddy ethos, and they don’t want to chance the PR slip-up of Miles behind the wheel, and, more importantly, improvising at the podium. As Shelby points out though, without Miles, they might as well have Doris Day behind the wheel. Miles’s wife, Mollie (Caitriona Balfe), is forgiving, up to a point. When Ken takes off with Shelby on an all-night test-drive, Mollie takes Ken on a dangerous trip in their family wagon (their son, mercifully, seemed to be home with the babysitter), berating Ken for his dishonesty, although not necessarily his passion. Interestingly, Ken reminds one of Mike McDermott, Matt Damon’s insatiable gambler from Rounders, and Mollie like a more amenable Gretchen Mol, who chastised Damon’s card-shark nature until she up and left him. Yet Mollie is more even-keeled, for better or worse, and supports her husband amply.

What is truth for Ken Miles? When his wife confronts his clandestine friendship-cum-race-driving, she asks him to simply tell her how he feels. His response: he doesn’t know. After all, who really does? If we can interpret velocity, gear-shifting and wheel-turning as a kind of dance, then Ken’s “truth” lives beneath language, as a kind of spiritual adrenaline. Take this, from Nicole Krauss’s Forest Dark: “when I write, what I am really trying to do is dance … because dancing is free of language. To write is, in a sense, to seek to understand, and so it is always something that happens after the fact, is always a process of sifting through the past, and the results of this, if one is lucky, are permanent marks on a page. But to dance is to make oneself available (for pleasure, for an explosion, for stillness); it only ever takes place in the present — the moment after it happens, dance has already vanished.”

Ken just wants to dance. He craves energy, needs fuel. To him, a car promises an explosion of life, and an existential enlargement formed from a kind of dissolution. As Shelby’s narration says, “There’s a point at 7,000 RPMs where everything fades. The machine becomes weightless. It disappears. All that’s left is a body moving through space and time.” Ken may not be as articulate at Shelby, and Shelby less so than Krauss, but they all exist with an indescribable desire to dance. To put the feeling into words, or package it into a marketing campaign, dilutes its power. And if the film teaches us one thing, it’s that pure power captivates us all.