Axe Throwing Is Easier Than Anticipated 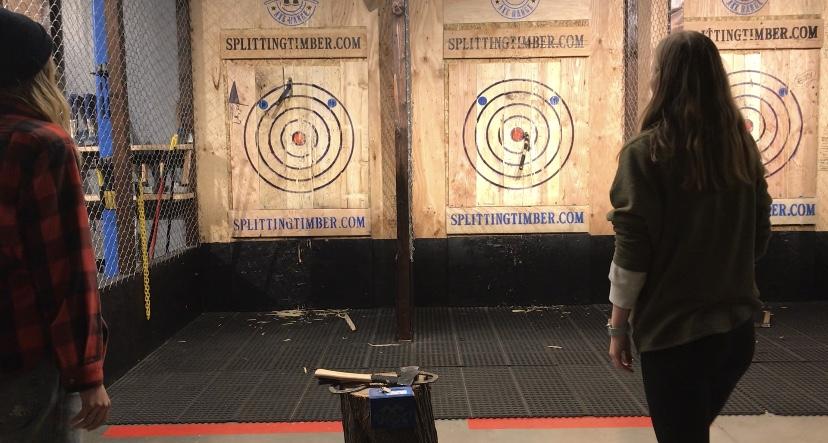 Over Thanksgiving break, my family and I visited my brother in Tucson, Ariz. For those of you unfamiliar with Tucson, the “c” is silent, so it’s pronounced “two-son.” We all incorrectly pronounced it for longer than I’d like to admit, but it seems like it would make sense. Anyway, we rented an Airbnb about 30 minutes from downtown. Tucson is home to the University of Arizona and boasts a scenic view of the surrounding mountains and an abundance of cacti.

One of our family activities was axe throwing at Splitting Timbers Axe Range. This activity has become more popular over the past few years, as there are now many companies around different cities. My parents participated in axe throwing in our hometown of Spokane, Wash., and the setup was similar, but the experience is based more on the company.

For us, there were three targets. We were a group of six, so we shared two targets, and a group of two shared the other target. Our host/guide/instructor was very funny and created an inclusive environment. We all created name tags that involved puns with wood, axes, hatchets, etc. Beforehand, our instructor made sure everyone was comfortable with the inappropriate jokes he warned that he would make. It was a more laid-back experience than I was originally anticipating. Since axes can be dangerous, I thought there would be more rules. The biggest rule was to not mess around with the axes and to stay behind the designated lines in case they bounced back on the rubber mats.

In addition, it was easier than I had expected. I was going into unfamiliar territory, as most people who go axe throwing are. I thought they would be heavier, but they were more like hatchets. There were two techniques: one involved holding the axe with both hands over your head and then throwing, while with the other you hold it in one hand and wind back over your shoulder. Both were very doable and it was mainly based on preference.

While my parents said the company in Spokane just gave you a specific amount of time on a target and you could do whatever you wanted with that time, Splitting Timbers made it a competition. We would play five rounds and then count up the total points at the end. Once we did this, the top three highest scorers would play for the winner. To everyone’s surprise, my mom ended up winning the entire thing. I enjoyed the competition a lot, and it added another element to the new concept of axe throwing. It became more about perfecting the technique and improving the ability to aim.

The highlight was throwing axes given to Splitting Timbers by Jason Mamoa. According to our guide, he visited Splitting Timbers and gave them three axes, which were much larger and heavier than the ones we were originally throwing. It was a great experience that I would definitely recommend. If you really find your passion, they even have an axe-throwing league.

Overall, it was great to see my family for Thanksgiving and to try this new experience with them. I would definitely recommend axe throwing to anyone who is considering trying it. It would be fun with a group of friends or your family. It was a great bonding experience that fostered some healthy competition.