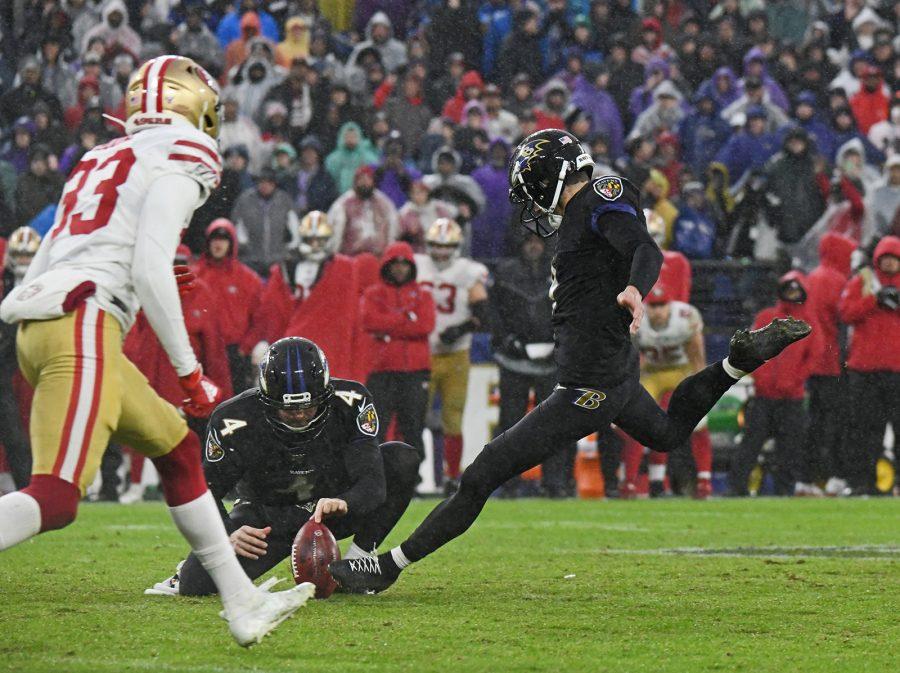 Ravens' Justin Tucker, right, kicks the game-winning 49 yards field goal with Sam Koch holding against the 49ers on Dec. 1, 2019. The Ravens defeated the 49ers by score of 20 to 17 at M & T Bank Stadium in Baltimore, Maryland. (Kenneth K. Lam/Baltimore Sun/TNS)

Thanksgiving weekend did not disappoint NFL fans this year. Divisional matchups, upsets and top-tier inter-divisional showdowns kept fans entertained from Thursday to Monday. While potential playoff participants continue to separate themselves from the rest, Week 13 did nothing for us in terms of clarifying any playoff seeding. Five teams representing four different divisions left Week 13 with a 10-2 record. One race that is becoming clearer, however, is for MVP. Lamar Jackson became the first quarterback in NFL history to have four 100-yard rushing games in a season. He’s also second in the league in passing TDs, while throwing only five interceptions.

In a Baltimore downpour, fans didn’t get quite what they were hoping for in this matchup of talented offenses. What we got was something better. In this potential Super Bowl preview, we got to see what these teams looked like when stripped of favorable conditions and comfort. Big plays were hard to come by, so both offenses had to grind out and rely on defense. In a loss, there were some bright spots for the Niners. Fred Warner did his thing on defense and was all over the field, and Raheem Mostert shined during a breakout game for him, running the ball 19 times for 146 yards and a touchdown.

The first firing of the 2019 NFL season, Washington’s Jay Gruden in October, ended up leading directly to the second firing of the year. On Tuesday, the Panthers announced Ron Rivera would no longer be coaching the team after nine seasons. This season has had its highs and lows, but this loss to the bottom-dwelling ‘Skins was too much for the Panthers front office. Summarized almost perfectly by Kyle Allen’s flailing fumble to end the game, the Panthers struggled to perform their core competencies during this game. Christian McCaffrey was also held to 44 yards on 14 carries in a good defensive showing by Washington.

While the Cardinals’ 3-8-1 record doesn’t do anything to bolster confidence in the Rams, Los Angeles dominated this game from start to finish. The Rams defense was impermeable for the Cardinals running game, and Kyler Murray was affected all night by the pass rush. Jared Goff played like the 1st Round Pick that he is, as he eclipsed 400 passing yards. The Rams are hoping for fate to be favorable for them to sneak into the playoffs as a six seed, and all they can do at this point to make that more likely is play like they did on Sunday.

The Ravens frequently find themselves in my previews, and they absolutely deserve to. This week, though, it’s their opponent’s surprising season that lands them on the list. The Bills, at 9-3, are one game behind the Patriots in the AFC East. They’ve been led by a stout defense and more-than-competent quarterback play by Josh Allen. A rare good weather game in Buffalo in December does slightly detract from the Bills advantage, but I don’t think they’re concerned over that at all. The Bills are confident, and they are ready to play with the big boys.

The Broncos have been inconsistent this year in their results. However, watching Denver play does not feel like watching a directionless team that isn’t improving. The Broncos have been able to keep it close with the majority of their opponents this year. The three teams that have been able to pull away and win by more than one score, the Packers, Chiefs and Bills, are proving to be solid playoff teams. Their opponent on Sunday is intent on proving they belong in that group. After a win over the Patriots that was really not as close as the score represented, the Texans still look like a team with a chip on their shoulder. Denver looks to bring the Texans back down to Earth in Houston.

Oakland is likely out of serious playoff contention for their last season in California, and they only have one team on their remaining schedule with a winning record: the Tennessee Titans. The Raiders have shown flashes this season, and this is their last chance to show proof of contention against a winning team. Tennessee is still very much in playoff contention, as they wait for Houston to slip up so they can take advantage of two late-season games against the Texans and end up in the playoffs. Oakland is coming off two straight blowouts, and this game will show a lot about the culture Jon Gruden has developed there — one way or another.