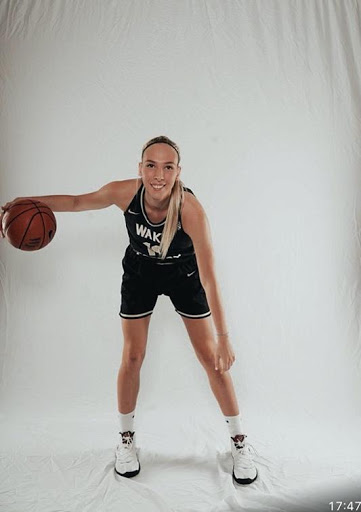 Ivana Raca is a junior on the women’s basketball team here at Wake Forest. Like most college students, she loves to watch Netflix and have lots of fun with her friends, but she also has other goals. In her junior year, she aims to make good grades and help her team to a winning season. Her college experience is unique not only as a student athlete but as an international one. If you ever go watch a game at the Lawrence Joel  Veterans Memorial Coliseum, you will see a Serbian flag hanging from the rafters proudly representing her family and home country.

Not to mention that you’ll see her dominating on the court. Last year as a sophomore she led the team in total scoring with 373 points, averaging 12.4 per game. She has already made a dent this year as the only non-returning starter, scoring a career high 23 points against Charlotte, 12 of which were 3-pointers, and adding three assists.

Nicole Mackey: How was your transition to the United States? Was there any culture shock?

Ivana Raca: I struggled more basketball-wise than culturally, since I’ve had some previous experience moving from one country to another. I was born in Cyprus since my dad was the coach there at the time. We then moved to my home country, Serbia, and around 12, I went to Greece so I could play basketball there.

NM: How do you manage being so far away from your family?

IR: That’s the hardest part; I miss being able to see my parents and my sister a lot. The time difference makes it difficult to speak because when I wake up, it is the afternoon in Serbia and when I finish practice, it’s around 11 p.m. for them. So, I try to FaceTime them every day around noon.

NM: You said basketball was a harder transition for you. What is the difference between the style of play in Europe vs the United States?

IR: Here you have to play more physical and in Europe the play is centered more on the team. But when I arrived here I had to really focus on my basketball skills and see what coach needed for me to do on the court.

NM: I was told you struggled some with traveling [the basketball violation] at first. Do you think you have improved on that as a junior?

IR: Yes, that was really my struggle to be honest. My coaches would say: “Ivana, don’t travel, do this instead. Like, just shoot it instead of traveling while trying do that other move.” (Laughs). Now, I have for sure improved. I do it every once in a while, but I have gotten better at it.

NM: As an international student-athlete, how has school been for you academically, especially at a place like Wake Forest?

IR: It’s tough. It’s really tough for me time-wise, so I have to stay organized. I also have to work harder than a regular student does because I didn’t grow up with English as my original language.

NM: You speak multiple languages, so which one was your first?

IR: I actually learned two growing up; Greek at school and Serbian back home with my family. I was introduced to English as well, and around 8 years old I knew some of it pretty well.

NM: One of your teammates mentioned that you are taking Greek Myth this semester. What is the class like for you?

IR: The class is actually hard for me, because I already know the stories from back home obviously. During the first one, my professor started talking about Zeus and I thought, “Who is Zeus?” even though he’s a main character. It confused me because I know him as “o Días,” so I have to work extra hard to translate the things he says during class.

NM: What made you pick Wake Forest over other schools?

IR: My coach wouldn’t let me visit any of the schools that recruited me since I was with a professional team and it was kind of strict. Coach Jen Hoover came to see me in Greece and basically had a PowerPoint of the campus and North Carolina for me. I felt like she was going to be a mom away from home, so that was a main reason why I came here.

NM: Getting back to basketball, what would you say you bring to the team on the court?

IR: I think I’m a leader by example. I will go early to shoot before practice and be one of the last to leave once it ends. I try to talk more on the court too because Coach Dane Sparrow has challenged me to be more vocal when I am out there and get out of my comfort zone.

NM: Speaking of Coach Dane, he mentioned that you watched film of Bogdan Bogdanović on the Sacramento Kings together. Would you say he is your favorite professional player?

IR: Yeah, when I watch the NBA, I love seeing him play. I like how he shoots the ball and can get to the basket, so I do think he is my favorite when it’s comes to modeling my game after someone. My all-time favorites I would have to say are Elena Delle Donne and Toni Kukoc.

NM: On campus, people know you as a student-athlete, but what’s something they don’t know about you?

IR: I want to write a book, but I don’t have a specific genre in mind. It would be in more a letter format with me giving the readers advice on different things, like break-ups or being on a team.