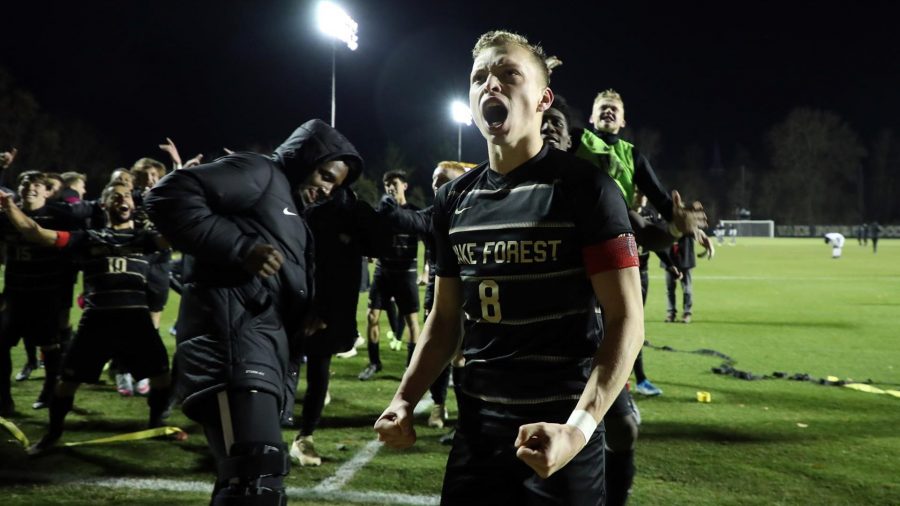 Alistair Johnson caused the jaws of everyone at Spry Stadium to simultaneously drop.

In the NCAA quarterfinals matchup against UC Santa Barbara, with a trip to the College Cup on the line, the clock was winding down at the end of the first half. With a little over a minute remaining, it looked like both sides would go into the half tied at 0-0. Then Alistair Johnson, the senior captain from Ontario, Canada, put the team on his back.

Johnson got the ball outside the 18-yard box with 1:10 left on the clock. He then dribbled past two defenders and made his way into the box where he was met by two more defenders. Johnson deftly ran in between them while bouncing the ball off a defender’s back foot to keep possession. Now, just a few yards in front of the keeper, Johnson was surrounded by five defenders. As he was being tackled, Johnson hit a hard shot on the ground with his right foot that went through the defender’s legs and past the keeper into the net. In the span of six seconds, Alistair Johnson scored one of the best goals of the season and gave Wake Forest a lead and the eventual 1-0 victory.

“I probably surprised myself a little bit,” Johnson said. “I looked to pick my head up quickly and didn’t see a quick option, an easy option, so I said let’s go for it and see what happens. I guess it ended up being a pretty good decision.”

“The bottom line is that we needed to survive. We talked all week about fighting to play football, fighting to play soccer and fighting to play our game,” Muuss said. “The moral of the story is that one of our goals is checked. We wanted to get back to the College Cup and we got the opportunity to do that.”

Another standout performances for Wake Forest came from junior goalie Andrew Pannenberg, who finished with four saves. In the first half, Pannenberg saved a close shot and its rebound to keep UC Santa Barbra off the scoreboard.

“The man sitting to my left [is] the man of the match easily, Andrew Pannenberg. Probably the man of the NCAA tournament thus far,” said Muuss at the postgame press conference. “Maybe we haven’t been as clean defensively, but he’s picked up the pieces. He’s done his job and then some.”

Wake Forest ended the match with 55% of possession and a 10-8 advantage on shots. UC Santa Barbara was a physical team, racking up 15 fouls and 4 yellow cards.

Wake Forest will now play the University of Virginia in the College Cup on Dec. 13 at 8:30 p.m. in Cary, NC. The two teams previously played in the ACC tournament semifinals, and UVA won 1-0. The last time the Deacs were in the College Cup was in 2016 when they lost to Stanford on penalty kicks in the finals.

Wake Forest is one of the best coached and most talented teams in the country. They have a great chance of bringing a championship home for the first time since 2007.