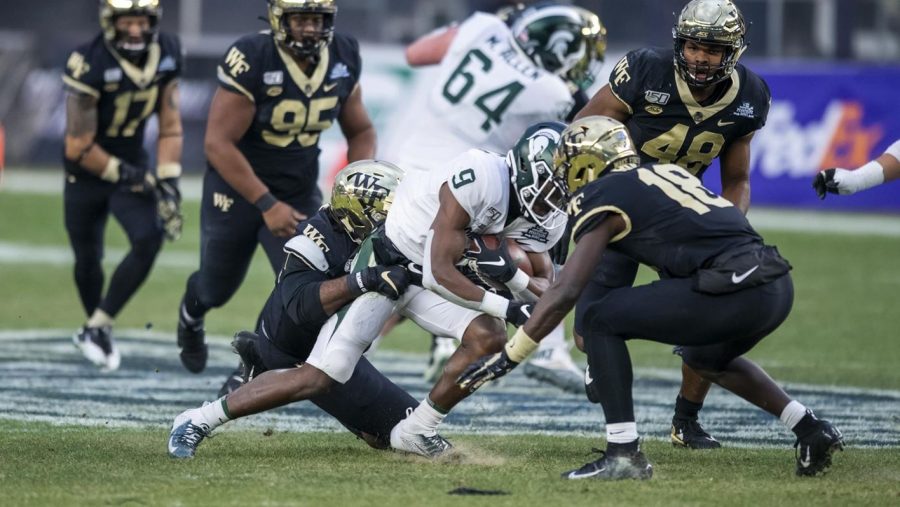 At the legendary Yankee Stadium, Wake Forest’s (8-5) three-straight bowl game winning streak came to an end after the Deacs lost 27 – 21 to the Michigan State Spartans (7-6) in the Pinstripe Bowl on Friday.

In a game that had everything from a Spartan defensive lineman pick-six to a one-handed, 16-yard touchdown catch by Wake Forest true freshman receiver Donavon Greene, the Deacs ultimately came up short on a few plays.

Despite Michigan State’s big plays, the Demon Deacons still found themselves in multiple positions that would allow them to win the game. Ultimately, they were incapable of capitalizing on those opportunities.

No sequence of play exemplifies this better than late in the fourth quarter when Lewerke had a 24-yard run on second and 17 to Wake Forest’s 16-yard line with 3:50 left on the clock. The run would set up an easy field goal to put the Spartans up two scores and effectively end the game. Instead, junior kicker Matt Coghlin missed the 28-yard field goal attempt, giving the ball back to the Demon Deacons with 2:57 left in the game and down by six.

What followed was an incomplete pass by junior quarterback Jamie Newman, a sack that knocked him out of the game for the last two plays and two slightly-off throws by sophomore backup quarterback Sam Hartman that sealed Wake Forest’s fate. After being handed a chance to win the game with a last-minute touchdown, the Deacs failed to muster a single first down.

In what was a rather remarkable campaign by the football team in 2019, the loss to Michigan State will mark a sour end to the season for many Wake Forest fans. Reaching its fourth-straight bowl game under head coach Dave Clawson (a school record), winning the North Carolina Big Four championship and cracking the College Football Playoff Top 25 for the first time in school history are all accomplishments to be proud of.

Yet, key injuries and inconsistent play in losses to Louisville, Virginia Tech, Syracuse and now Michigan State, will leave them feeling like they left a lot on the table in 2019. They finished the year losing four out of their last five games after starting the season 7-1.

“[Against Michigan State] we didn’t make enough plays. I’m proud of the way our players competed. We got really thin. That was a little bit the story of our season. I think when we were a healthy football team, we could play with pretty much anybody in the country,” Clawson said after the loss, as reported by Les Johns for 247Sports. “I think the telltale sign of our program is we’re not happy. We’re disappointed we didn’t get double-digit wins, that we didn’t win our fourth bowl game in a year. I think we’re past the point of just being happy to get to a bowl.”

On the brighter side, both of Wake Forest’s First-Team All-ACC players in wide receiver Sage Surratt and defensive end Boogie Basham have decided to return for a senior season in 2020 amid NFL Draft speculations. Surratt led the ACC in receiving yards and touchdowns up to his season-ending injury at Virginia Tech. He still finished with 1,001 receiving yards and 11 touchdowns in nine games. Basham led all Wake Forest players and finished third in the ACC with 10 sacks in 2019. He also registered 17 tackles for loss and three forced fumbles in his best season thus far.

Moving forward, Clawson and the Demon Deacons should hope that the return of key starters, coupled with the emergence of new contributors like Greene, will help them change the 2019 narrative toward a special season in 2020. With the new year quickly approaching, the Demon Deacons have some resolutions to make.