Take Me Out To The (Foot)ball Game: Deacs Arrive In NYC For The New Era Pinstripe Bowl 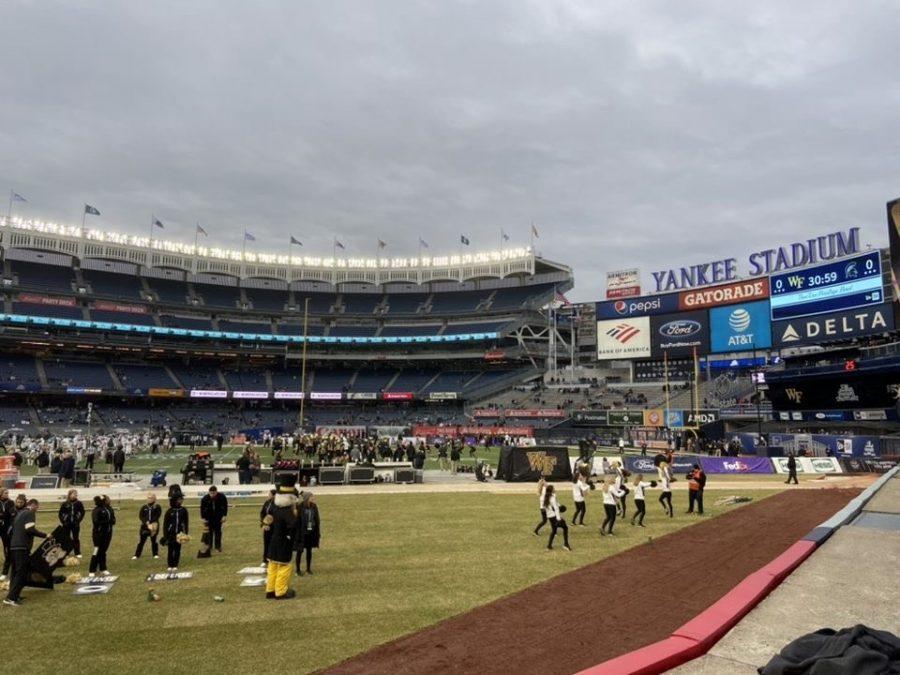 While going to a bowl game is an athletic feat every year, it is also a great experience for the players and fans alike. This year was especially unique, as the New Era Pinstripe Bowl brought the team to Manhattan to go up against the Michigan State Spartans — giving over half of the team an opportunity to visit New York City for the first time.

The players get an all-expenses paid trip to their bowl locale, complete with new experiences in that location leading up to the game. In addition to two bowl practices at Columbia University, the team visited the World Trade Center & 9/11 Memorial, Radio City Music Hall, Rockefeller Center, the New York Stock Exchange and more throughout their time in the Big Apple.

Of course, the game itself was an experience due to its location in historic Yankee Stadium. On another note, however, the game also marked the end of many influential seniors’ football careers at Wake Forest.

Justin Herron, Nate Gilliam and Jake Benzinger wrapped up their careers as the original members of the ‘Beef Boys’ — the nickname of the offensive line. Other senior leaders and stars of the team playing in their last career game for the Deacons at Yankee Stadium were Essang Bassey, Amari Henderson, Justin Strand, Dom Maggio, Cade Carney, Kendall Hinton, Scotty Washington and Jack Freudenthal. The graduating class came in to a 3-9 squad and ended their careers with four-straight bowl trips to Annapolis, Charlotte, Birmingham and New York, coming away with wins in three of the four.

“The bowl sponsored activities like a comedy show, [visiting the] 9/11 memorial, and the Radio City Rockettes were some of the best experiences in all of the bowls we’ve made it to,” senior offensive linemen Jake Benzinger said. “Being a Red Sox fan, the Pinstripe Bowl and Yankee Stadium were always close to the top of my bowl wish list, just knowing how many great players and games were played there.”

The dance team, cheerleaders and band were all present in New York City to cheer on the Demon Deacons in their last game of the 2019 season. Nearly two-thirds of the group left together from Winston-Salem late Christmas night, with the remainder coming in from various places across the United States and internationally. They also made their most of the trip to New York, visiting the Empire State building and getting to mingle with the much-larger Michigan State spirit squad.

“Being able to walk around New York City representing Wake Forest was a heartwarming treat during the holiday season,” senior dance team member Alyssa Lloret said. “Dancing on grounds that world-famous and talented athletes have stepped on was an experience like no other. Representing the Deacons in NYC was a wonderful experience that I will never forget and cherish — a great cherry on top of my four years dancing for the Deacons.”

Additionally, the location of the Pinstripe Bowl allowed for the Demon Deacon fan base to come out and support the team. With a large percentage of the student body hailing from the New York metro area, as well as the North East, many students and their families were able to attend this year’s bowl game.

Further, a large number of Wake Forest alumni live in the surrounding region and multiple large airports allowed for an influx of black and gold into NYC. The baseball diamond being turned into a football field definitely created some logistic challenges in the layout and sightlines, but the ability to play a football game in such a historic locale was extremely memorable.

“I absolutely loved the stadium,” alumnus Cameron Debro, who graduated in 2018, said. “The angle I had in section 203 was interesting. I felt I had a decent enough seat to analyze what I was watching and then could turn to the screen if I felt I was going to miss something. The way everyone was sectioned — I think a big thing for me was that security was rough and finding 203 was very poorly marked but otherwise the atmosphere was great and I’d be back.”

Overall, while the result of the game was evidently not what the Demon Deacons were looking for in New York, it was a monumental occasion for everyone involved. It was a huge turnout for Wake Forest, topping the fanbase of Michigan State handily with a much larger student and alumni base to start. There’s almost 500,000 living alumni from Michigan State compared to around 60,000 Demon Deacons. So, it was a large feat to outnumber the Spartans — something that the team and coaching appreciated in the last game of the year.

“I really want to thank all the Deacs that made it up to New York,” Head Coach Dave Clawson said in his post game press conference. “All the students, our fans, our alumni. I mean, it’s that type of support that we get at bowl games is amazing. To come up two days after Christmas to New York, we are grateful for our fan base.”