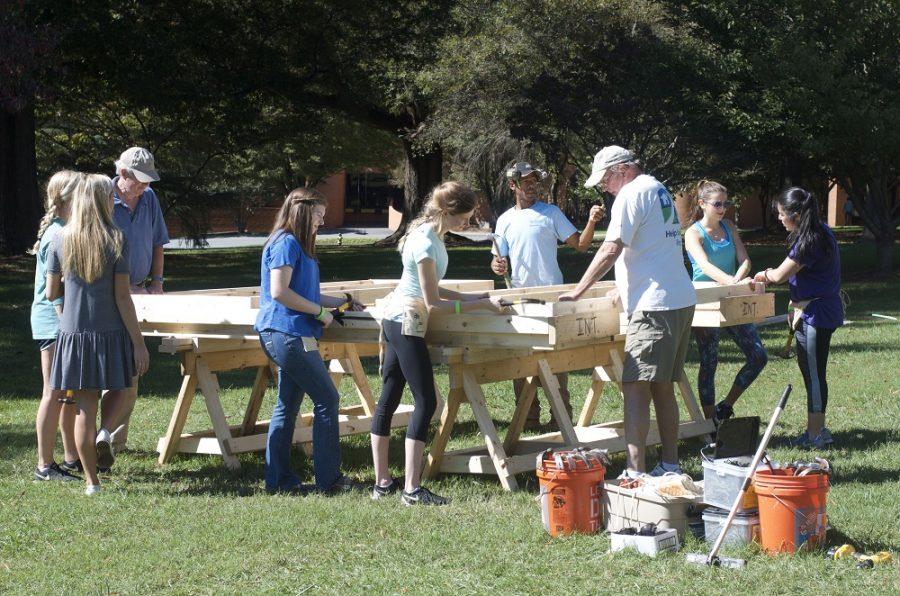 The sound of hammers echoed across Davis Field Oct. 14 as groups of students, faculty, staff and alumni partnered with Habitat for Humanity for an on-campus build hosted by Wake Forest’s Leadership Project.

Throughout the afternoon, volunteers assembled walls that will be used in the construction of a habitat home in the local Winston-Salem area. The community build was held to promote the upcoming visit of Jonathan Reckford, CEO of Habitat for Humanity, who will speak on campus on Oct. 20.

In an interview with the Old Gold & Black, Reckford said he believes that service such as this is a positive and healthy way to build a stronger community within Wake Forest.

“I have certainly been encouraged by seeing how Wake is involved in local Habitat for Humanity organizations and our local affiliate in Winston-Salem,” Reckford said. “I think that serving together turns out to be an incredible way to build community, because when you are putting up walls for a house — or all the other positive ways to serve a community — that’s actually a great way to build a relationship with other people. It not only reinforces Wake’s values and makes a difference for the partner organization, but it’s also a way to tie people together and connect them on campus.”

This ideology of building a healthy community through service was reflected in freshman students Sara DeCicco’s and Stephanie Rothney’s decision to attend the build in order to become involved with the campus community.

“When I heard about today’s build through my first-year seminar class, I decided I wanted to help out and get involved,” DeCicco said. “I’ve had a great time working here today, and it’s been a really great, community-building experience.”

The building of the community is one of the principles that Reckford recognizes within Wake Forest and also advocates for within his organization.

“One area that I think is certainly a focus to Wake — and I am a huge fan of, as well — is service-learning,” Reckford said. “I certainly think Wake has done well with engaging in the broader community, not just the Wake Forest community and this is one of the things we encourage our staff to do: go out on the frontier and build and participate. So once you’ve worked here a year, you can have a paid week off to travel and go out on the frontier to participate on a home build somewhere in the world. It’s a way to stay deeply connected to what we do and we think that’s really important.

“The Leadership Project is an initiative by the university between the Office of Personal and Career Development (OPCD) and the office of the president to bring leaders across different backgrounds and experiences on campus,” said Deede Pinckney, the assistant director of marketing and communication for the OPCD. “With Wake Forest’s motto being ‘pro humanitate,’ the thought [behind inviting Reckford] was ‘what better tie than to bring the CEO of Habitat for Humanity to speak to students.’ It seemed like a no brainer and Habitat already has a strong, established relationship with the university.”

Reckford has had a variety of experience in both the private and non-profit sectors, giving him lots of stories and reflections to share with students.

He worked for corporations inlcuding  Goldman Sachs, Marriot, Disney and Best Buy before he began serving at his local church in Minneapolis, Minn. which led to the opportunity to work with Habitat for Humanity.

“I grew up in a family that had deep passions about service, justice and human rights issues, so transitioning to the non-profit sector was something that I had been thinking about for a long time,” Reckford said. “I had the idea of doing something more long-term and mission-oriented, but I wanted to learn the skills in the private sector to bring to the non-profit sector.”

Over the 10 years that Reckford has served as CEO, he has used his experience to combat obstacles such as the two housing crises that emerged from the Southeast Asia tsunami and Hurricane Katrina.

Both of these natural disasters forced him to rethink the way he led the organization.

“The axiom I was using internally was: ‘Let’s be religious about our principles but not our tactics,’” Reckford said. “We became more flexible. We stayed true to Habitat’s principles, but we tried to be more flexible in the number of ways we help families get housing.”

This idea of flexibility has not only been reflected during the confrontation of these crises, but also in the many events througout his life that led to him become CEO —  especially right when he graduated college.

“Truth be told, I had no idea what I was going to do when I got out of college,” Reckford said. “It’s funny, when I was in college, I wanted to go to law school when I graduated. But I realized to my great surprise that I had no interest being a lawyer, but I just thought that is what you had to do to go into politics.”

“As I came to that realization, I switched gears and had to find a job,” he said. “It’s a longer story, but I ended up talking my way into a job at Goldman Sachs that I was completely unprepared for; however, it was a great learning experience even though I later I decided it was not probably a good fit for me.”

His advice for students was to not be stressed about what exactly it is they do in their 20s, but rather to follow their passions and what interests them.

“I think the first thing I would say is try to soak up as many experiences as you can,” Reckford said. “A wise person gave me the advice when I was in graduate school — I was very surprised at the time — but he said, ‘It doesn’t really matter what you do in your 20s but think of your 20s as continuing education and try to soak up as much experience as you possibly can because you never know what that will ultimately lead to’.”

Reckford will be speaking in Brendle Recital Hall at 6 p.m. Tuesday, Oct. 20.

“I am looking forward to being back at Wake,” he said. “I spoke on campus a couple of years ago and greatly enjoyed it.”