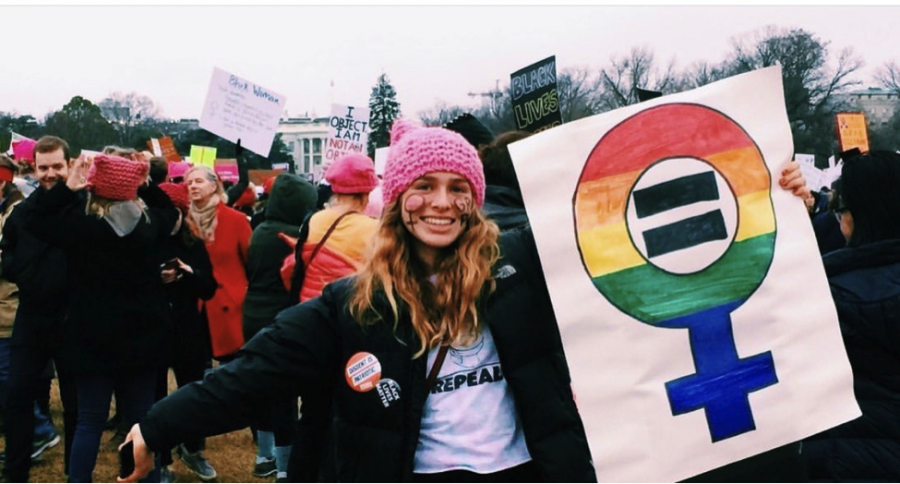 Sophomore Olivia Thonson is a dedicated spokesperson for women’s rights. Thonson is a Women and Gender Studies and Politics and International Relations double major whose passions include improving sexual education, raising awareness on the concept of intersectionality and fighting to protect women’s reproductive rights. She is president of the Intersectional Feminist Collective on campus, the creator of the “Sex Ed Done Right” speaker series and a Sexual Wellness intern in the Women’s Center. Her reputation as one of the most passionate feminists on campus has led her to speak at multiple Planned Parenthood events and made her a popular guest speaker in university classrooms.

What would you say you’re most passionate about right now and how is that reflected in your involvements at the university?

I’m most passionate about sex education, just because I think most people here haven’t had a proper one yet, and if they did, it was abstinence-based. To address that, we’ve been holding the “Sex Ed Done Right” speaker series, a series of talks that are geared towards college students. For example, two of our speeches were “The Female Orgasm” and “Destigmatizing Sex Work.” I’m also developing a sex ed curriculum right now for new students during orientation, which would cover general sex ed — STIs, contraception methods, etc.

What sparked your interest in these issues?

I really became passionate in high school when my friends and I started an organization called “This Means War,” which was for women who were victims of assault and rape. Through the organization, we provided free self-defense classes after school. We also tried to revamp our sex-ed curriculum within our school district. That was the first time I became passionate about sex-ed reform. When I came to Wake Forest, one of the orientation seminars involved putting a condom on a banana. I immediately thought to myself, “everyone knows how to do that — we learned all that in high school.” Then I started talking to people who were saying, “oh, we didn’t have sex ed.” That was really shocking for me, and it made me passionate about making a difference here, too.

How has being a student at the university changed your perspective on these topics?

I’m from Los Angeles, which is a very progressive community. My high school was very open about sex education, so coming to Wake Forest made me realize that people come from all different backgrounds — not everyone had access to the same knowledge I have about sex. A lot of people didn’t get that education from their parents or guardians, either. The experience kind of broadened my horizons in a way, as cheesy as that sounds.

In your opinion, how are issues such as feminism perceived by other students and faculty?

We have a very progressive faculty, and most of them are very open to the idea of having a feminist club. I’m a Women’s, Gender and Sexuality Studies and Political Science double major, and both of those departments are pretty open to the idea of intersectional feminism on campus. However, I don’t think the student body is like that at all. I think they mostly perceive it as a group of “feminazis” or “manhaters.”

I think it’s mostly where they were raised. A big factor is who they hung out with in high school and who their parents are. Another part of it is media — most media only portrays really extreme feminists, and I think that always seeing that could influence people’s perception.

If you could change or implement one policy in the United States, what would it be and why?

I think it would just be mandatory sex education in all high schools, but not just focused on the biology and anatomy. I think it should be a comprehensive sex education that includes sexual pleasure and consent, as well. I know a lot of Northern European countries start teaching students about consent at a really young age. Beginning consent education in kindergarten is much more effective than beginning it in college.

How do you plan on incorporating these passions into your life after college? Do you think your career will reflect your current interests?

Out of all of your experiences concerning female empowerment, does one particular moment stand out to you as the most rewarding?

I think it would be last year when I was doing the “Sex Ed Done Right” speaker series for the first time. One of the speeches I organized was “The Female Orgasm,” and I was shot down by a lot of people on that, especially by the administration. In the end, over 120 people showed up. We completely filled the auditorium we were in, which just proved to me that the topic holds more interest than people think.