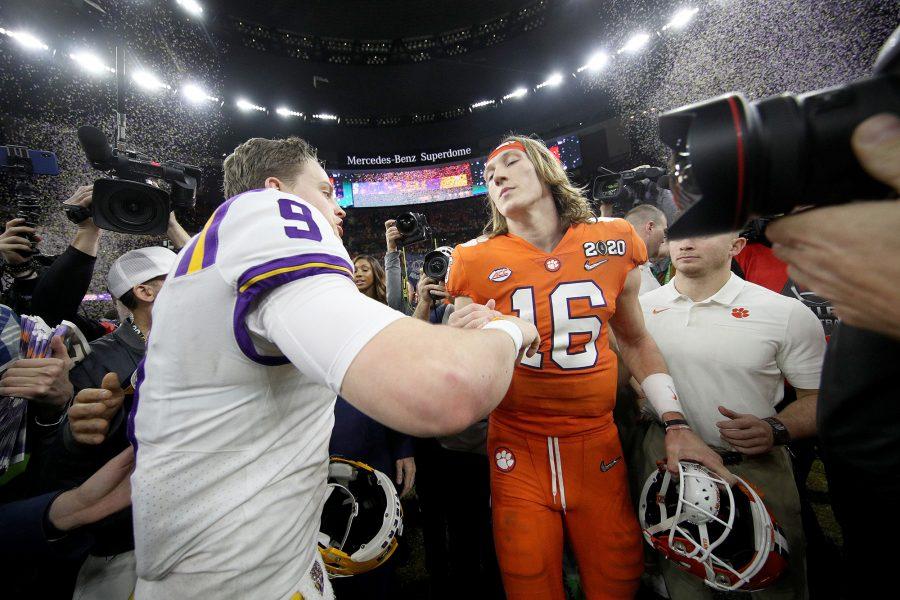 The 2019-2020 college football season reached its zenith on Monday night as The No. 1 LSU Tigers (15-0) battled the No. 3 Clemson Tigers (14-1) in the New Orleans Superdome on the biggest stage the sport has to offer. The matchup between two prolific offenses with weapons at nearly every position had college football fans everywhere on the edges of their seats; the contest did not disappoint.

The squads were captained by two dynamic quarterbacks in fifth-year LSU senior Joe Burrow and Clemson sophomore Trevor Lawrence, both of whom were riding the momentum from excellent regular season campaigns. The venue provided a significant advantage for LSU, as the Superdome sits a mere stone’s throw from the Tigers’ home stadium in Baton Rouge. The Clemson faithful, however, were out in droves as well, invading the sea of yellow and purple in the stands with a smattering of orange.

Both offenses stalled to begin the contest, until Clemson broke the initial scoring drought on a Lawrence scrambling touchdown late in the first quarter. Momentum shifted several times throughout the first half, as Burrow and Lawrence continuously exchanged blows. The scoreboard read 28-17 in favor of LSU at the half after the Tigers ripped off 21 unanswered points in the second quarter.

Clemson’s offense roared to life to open the second half, as standout halfback Travis Etienne found the endzone four minutes into the third quarter. The rest of the game, however, was surprisingly lopsided, as Burrow threw for another pair of touchdowns to remove any doubt from the contest’s final result. The game ended 42-25, with LSU lifting the championship trophy.

Unsurprisingly, Burrow stole the show, throwing for 463 yards and a whopping five touchdowns in a performance that will undoubtedly enshrine his name in college football’s history books forever. His draft stock climbed even higher (if such a thing is possible) as he showed the nation what it truly means to elevate one’s game with everything on the line. Burrow’s supporting cast performed admirably as well, with running back Clyde Edwards-Helaire scampering for 116 yards and receiver JaMarr Chase finishing with 221 receiving yards and a pair of crucial touchdowns. Trevor Lawrence finished without a passing touchdown, completing fewer than 50% of his passes for a meager 237 yards. Halfback Travis Etienne finished with 78 rushing yards and a single touchdown in the loss.

With the victory, LSU caps off one of the most dominant campaigns in college football history. With resounding victories over the likes of Alabama, Oklahoma, Auburn and Florida, the Tigers passed every single test with flying colors. Burrow leaves Baton Rouge a hero, headed for what will likely be   a long and storied professional career.

Clemson returns home with their tails between their legs, force to endure an unfortunate ending to an otherwise superb season. Lawrence (per ESPN.com) vowed to return next season with the intent of finishing what was started during the 2019-2020 campaign. The Clemson Tigers end their season with only one loss, falling just short of their ultimate goal of becoming repeat national champions.