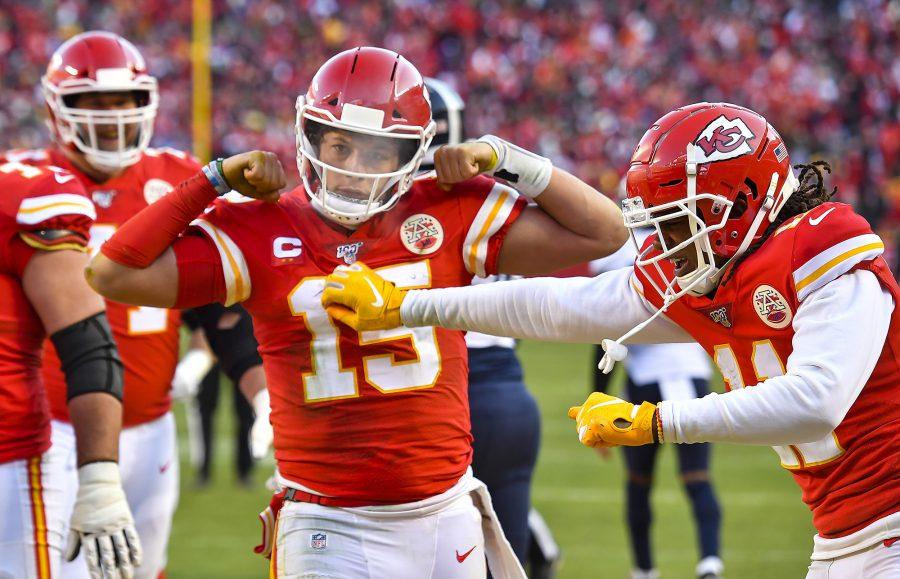 On Sunday, the only visual link between the way that both the Kansas City Chiefs and San Francisco 49ers took care of business at home during championship weekend was the red confetti rain of the teams’ shared color.

Using very different offensive philosophies, the Chiefs and 49ers dominated their respective opponents in the Titans and Packers to set up one of the most contrasting matchups between offensive styles in recent Super Bowl history.

The Tennessee Titans seemed poised for another miraculous win after jumping up to a 10-point lead twice in the first half. However, quarterback Patrick Mahomes, much akin to his 24-point comeback magic against the Houston Texans in the divisional round, seamlessly led the Chiefs to victory once again.

After dislocating his right kneecap in Week Seven in a game against the Broncos, the future of the Chiefs quarterback in 2019 was in limbo. There were many talks about shutting him down for the rest of the year to avoid recurring health issues like the ones that led former Colts quarterback Andrew Luck to retire during the offseason.

Now, Mahomes seems to be back to his full powers and leading an offense perfectly designed by head coach Andy Reid to maximize his tantalizing skills. In both playoff games against the Texans and the Titans, there was a palpable sense of scoring every time the Chiefs received the ball.

Since trailing the Texans by 24 points early in the second quarter of the divisional round, the Chiefs have score touchdowns in 12 out of 17 total drives for the remainder of the playoffs. This is an astonishing rate of touchdowns scored in 70.6% of offensive drives.

The Titans even tried to keep the score close on a decent night by quarterback Ryan Tannehill (209 passing yards and two touchdowns). Yet, without Derrick Henry rushing for 150-plus yards again, Mahomes and the Chiefs offense were just too much for them to handle.

The other conference championship game of the evening featured a completely different type of offensive dominance, as the 49ers literally ran the Packers out of town with 285 yards through the ground.

Head Coach Kyle Shanahan deserves all the praise for putting journeyman running back Raheem Mostert in the best position to succeed within the 49ers’ offense. Prior to landing on the Niners, the undrafted running back out of Purdue University was cut from six different teams over his initial 18 months in the NFL. On Sunday, Mostert set the 49ers single-game record for rushing yards with 220 to go along with four rushing touchdowns.

The Niners’ running game was so effective against the Packers that quarterback Jimmy Garoppolo was asked to throw the ball a total of eight times and for only 77 yards in the entire game. This marks the fewest pass attempts in a playoff game since Miami Dolphins quarterback Bob Griese attempted only seven passes for 73 yards in a 24-7 win against the Minnesota Vikings in 1974 during Super Bowl VIII. Garoppolo’s numbers seem even more incredible if we consider today’s pass-happy tendencies in the NFL.

The Niners’ formula for winning against the Packers seemed to turn the NFL’s clock back in time with a dominant running game and extremely physical defense. Their defense held Packers star running back Aaron Jones to just 56 rushing yards while forcing three turnovers out of a Packers squad that was fourth-best in turnover differential (+11) in 2019.

Now, the 49ers’ defense has a much taller order to replicate, their success against the red-hot Chiefs offense.

It will be interesting to see which offensive approach prevails on Feb. 3: the Chiefs aerial attack led by Mahomes or the physical 49ers running game? Either way, we’re in for a treat.