Ibram X. Kendi Speaks On The Idea Of “Antiracism” 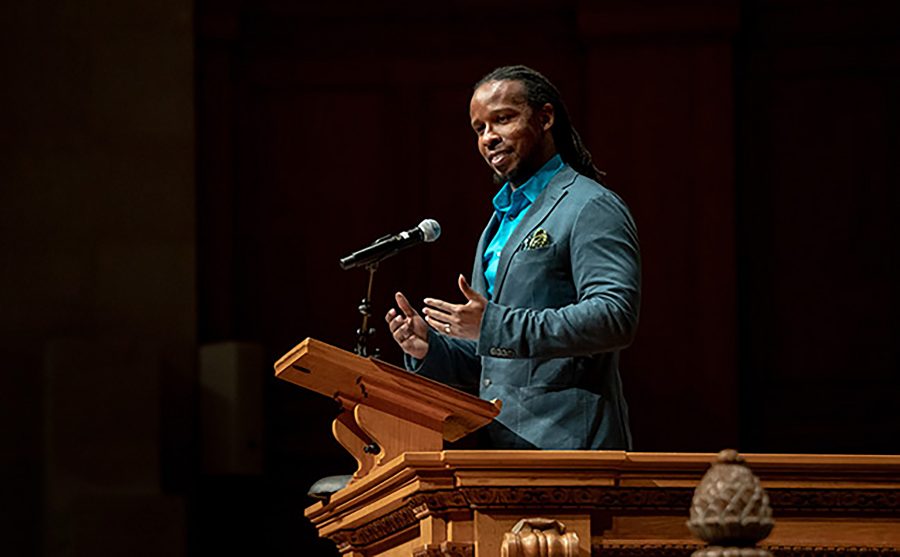 Wait Chapel was packed with students, faculty, alumni and Winston-Salem residents on Monday night for the keynote address of Ibram X. Kendi to honor and celebrate the legacy of Martin Luther King, Jr.

Kendi, a history and international relations professor and founding director of the Antiracist Research and Policy Center at American University, gave a powerful address about racism.

The event was the result of joint efforts facilitated by both Wake Forest and Winston-Salem State University (WSSU). According to Wake Forest News, the two universities have partnered to sponsor a keynote speaker for Martin Luther King, Jr. Day for the past 20 years.

In the spirit of unity and inclusion, staff and students from both colleges addressed the audience to start the evening, speaking on the necessity to effect positive social change and to work daily to improve the local Winston-Salem community.

The WSSU Gospel Choir made an early appearance as well, charming the audience with a number of powerful hymns that highlighted the importance of moving forward.

As Kendi took the stage, he seemed to move with the calmness and confidence of a man endowed with the mission of conveying a message in which he truly believed. His voice did not quiver, his hands did not shake.

Kendi opened by expressing his eagerness to cover the true identity of King, rather than the watered-down version portrayed by textbooks and the media. He wanted to make it clear that King’s viewpoints focused on the protection and preservation of all human life, and that the man whose life and legacy we celebrate would not, and did not, hesitate to put his life on the line for the sake of social justice. He was, according to Kendi, a radical of the greatest and most influential kind.

Kendi then explained one of the most formative events that occurred during his childhood.

One event, he said, in particular stood out: when Kendi was in high school, he participated in an oratorical contest honoring the life and legacy of King. The judges and audience were so taken with his remarks that they awarded him first prize, crowning him champion of the entire contest. However, instead of recalling this experience with pride and nostalgia, Kendi described the experience as shameful.

His younger self’s remarks, he told the audience, were marked by criticism for his own race, defined by claims that African Americans themselves were at fault for the issues facing their community.

From there, Kendi went on to dissect the nature of racism. He addressed the fact that most Americans believe they are not racist. In fact, he said, slave traders and the other oppressive groups likely believed the same thing. Kendi called for an examination of self, a period of self-reflection and personal change. Kendi argued that there is no gray area when it comes to racism; one is either a racist or an antiracist.

According to Kendi, the true danger lies in the belief that one is not racist; by refusing to accept that change is necessary, racist ideas and viewpoints are allowed to continue to infiltrate American society.

The rest of Kendi’s remarks were also powerful. He discussed the ways in which racism still pervades American society, including standardized testing and skewed media coverage, exposing many of the conclusions reached by professionals as fraudulent and unfairly biased. He ended the speech by stressing the point that inadequacies are not only acceptable but inevitable, and reiterating that each individual’s efforts to embody the tenets of antiracism, in spite of these inadequacies, is what will result in effecting positive social change.