Deacons Fall To Cavaliers In Overtime 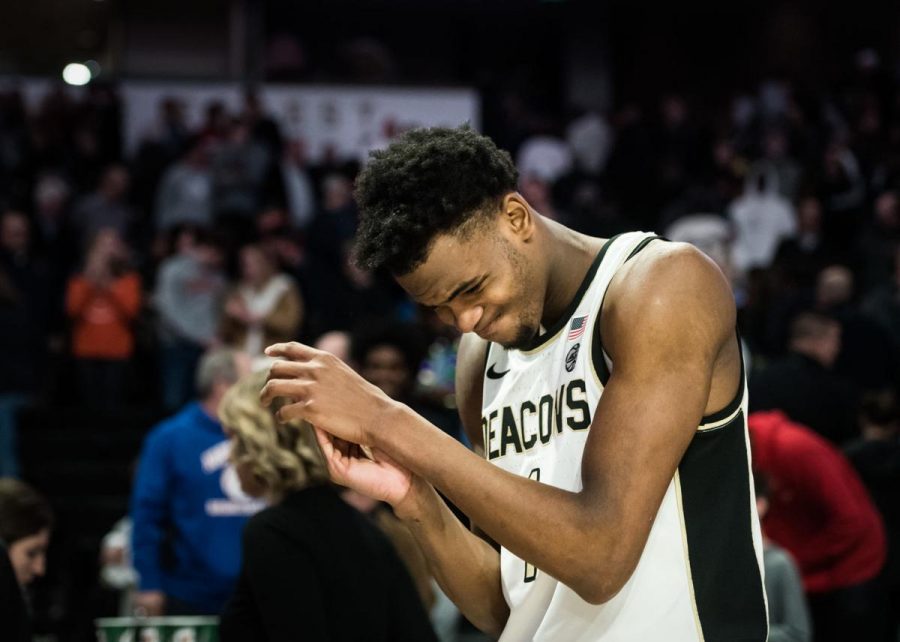 “I thought our guys put us in a situation to win the ball game,” said Wake Forest Head Coach Danny Manning. “We had some guys make some plays, we had some guys play really well. Disappointed in the outcome, but definitely happy with the fight our guys displayed.”

It was the sixth straight missed game for Brown, but only the second time in his entire Demon Deacon career that Childress hasn’t suited up. The senior floor general suffered from a foot injury during practice earlier in the week, ending the streak of 49 straight games started.

Wake Forest led by two with under a minute to go in regulation. Eleven seconds after being subbed in, Virginia’s Jay Huff knocked down a three from the corner to give the Cavaliers a one-point advantage. Two free throws by Kihei Clark stretched their lead to three with 20 seconds remaining.

Manning elected to use a timeout with 10 seconds to go. Redshirt senior Andrien White got fouled while launching from long range, knocking down all three free throws with 1.7 seconds left on the clock. Virginia Head Coach Tony Bennett tried to ice him by calling two timeouts from the time between the foul and the last make, but White was not fazed.

In overtime, Wake Forest never led, but once again had the ball in the final moments. Down two with eight seconds left, Manning called timeout once again, which upset some fans, who would’ve rather seen the Deacs try to capitalize on an unset Virginia defense. Manning defended his decision. “I didn’t like the way we were spaced out on the floor, so I called a timeout,” he said.

Graduate student Torry Johnson drove to the baseline and made a short pass to junior Olivier Sarr, who wasn’t able to get a shot off, and the Hoos escaped with a two point win.

White scored 21, one shy of his season high of 22 he set during the Clemson game earlier in the week. He shot 10-11 from the free throw line and extended his streak of games with three or more three-point field goals made to four. He played all 45 minutes in the loss.

“When you’re playing like that, you’re not coming out,” Manning said.

Bennett’s squad is hurting from the losses of Kyle Guy, DeAndre Hunter and Ty Jerome, but continues to be an elite defensive team. Virginia leads the nation in scoring defense, allowing a diminutive 49.7 points per game.

That defense made an immediate impact on Wake Forest, as they shot an abysmal 1-15 from the field during the first eleven minutes. However, they were able to keep the game close with strong defense themselves, only trailing 12-4 at the end of the horrific stretch.

Wake Forest overcame this embarrassing start with a very impressive stretch. A switch was flipped and the Deacs couldn’t miss, finishing the half shooting 8-9 from the floor, six of which came from downtown. The 31 point barrage in less than nine minutes gave Wake Forest a 35-28 halftime lead.

A strong start to the second half stretched the lead to as much as a dozen, but the Deacs cooled off again, and Virginia clawed their way back into the game. An 18-4 run by the Hoos helped them regain the lead at 46-44 with just over eight minutes remaining, and the Deacs never led again by more than two.

Junior college transfer Thomas Woldetensae led the way for Virginia, scoring all of his points from deep, making 7-14 of his three-point attempts for 21 points.

“He’s continuing to learn the system, and where he can be aggressive,” said Bennett. “He’s not afraid to shoot. And I like that.”

Sophomore forward Isaiah Mucius provided a huge spark for the Deacs in this game. His 16-point, 10-rebound line doesn’t speak to how well he played and the amount of energy he brought. He shot the ball confidently, hustled, and pumped up the crowd as well as his teammates. “We all know that we gave 110%,” said Mucius. “We are close to turning that corner.”

The loss marked Wake Forest’s eighth against Virginia. Virginia was able to build off their performance on Sunday with a signature victory against  fifth-ranked Florida State Tuesday night. Wake Forest will look to get back in the win column after back to-back tough losses on Wednesday night as they face a strong Notre Dame team in South Bend. The Deacs will return to Winston-Salem to face off against Clemson once again on Saturday.