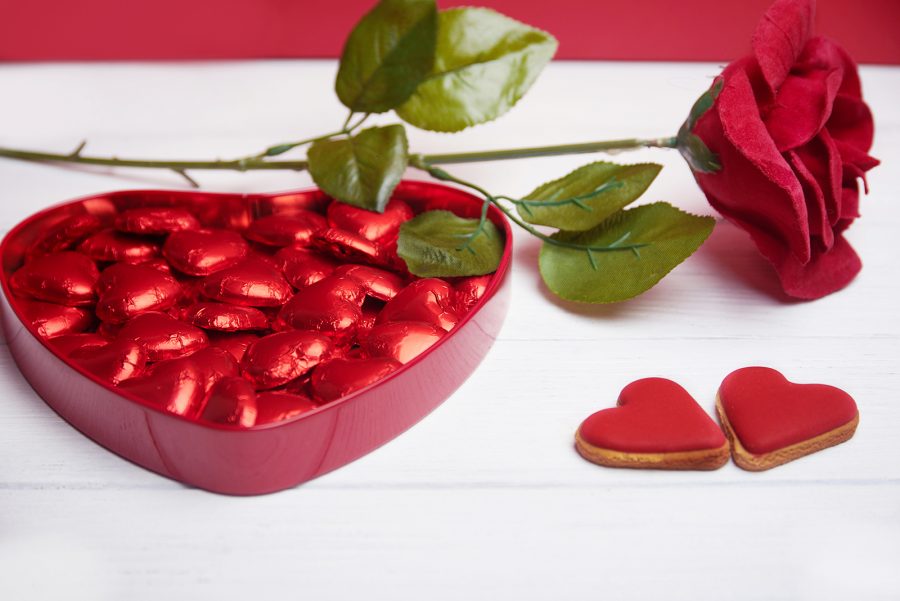 Something as simple as a romantic dinner out on Valentine's Day (especially if you have kids) to spend some quality time together will still be a great date idea. And a well-thought card expressing your love for each other goes a long way. (Viktoria Faion/Dreamstime/TNS)

Love. What is it? What does it mean? How do we get it? Or, more importantly, how do we know we’ve gotten it? These are all questions that, at some point or another, you may have asked yourself. Romantic love is, perhaps, one of the greatest phenomenon’s observed in life. Romantic love is presented to us throughout modern media in an idealized manner (think: The Notebook). It is as though we are told by the world around us what love is supposed to look like and how to attain it (i.e. if you’re not writing him a letter every day for a year, then it’s not love).

One problem, however, is that love is not tangible. It is not something that can be shown to others and told “look, this is love.” Love, from a philosophical standpoint, is much deeper than just that. What can be said with certainty about love is that it is difficult to define.

Many a philosopher has tackled the love question, take Robert Nozick for instance. In “Love’s Bond” he proposes the idea that there is a state of infatuation or obsession, and then, separately, there is “true” love.

The key distinction between the two, Nozick would say, is that when true love is realized, two people love each other for who the other person is, and not for specific characteristics that the other person holds. In a state of infatuation, the focus may be on how another person makes you feel in their presence, and how (much) you think about them in their absence.

Regardless of whether you agree with Nozick’s perspective, what can be said is that in one case (infatuation), the focus is on the now — the butterflies, giddiness and, potentially, what qualities or things a person can offer. And, in the other case (true love) the focus is on the deeper connection — knowing your partner rather than just knowing things about them.

Our society has placed higher standards on wedding days than on maintaining a heathy, loving marriage itself.

Now, take these conceptions of and questions about love and ask them while on a college campus largely overshadowed by a sex-driven Greek system. As young adults in this environment, how are we to find our answers for what love is and what it means? If it’s true that we are influenced by our environments and its part of our very nature to want to “fit in” to that environment, I find that it’s increasingly difficult to form a healthy conception of (romantic) love while on a college campus. Think about it. The “motions” we go through on this campus, especially if you are a member of the Greek system (and honestly, even if you’re not), teach us one thing: sex. It’d be naïve to say that X fraternity mixes with Y sorority because “those are some really nice girls and I can’t wait to treat her right.” No. The social ordering and proceedings of the Greek system prioritize sex. X fraternity mixes with Y sorority because “those girls are hot and I’m trying to get laid.” Obviously, I recognize it’s a bit outlandish to say that the Greek system runs on sex, but when considering how my, or others, views on love (what it means, how it forms) are influenced it becomes pretty clear that there does seem to be some focus on it. I also recognize that this understanding is not true for everyone — it is very possible (and it happens often) to be in a serious romantic relationship and feel that you know what love is while in college. However, the concern lies within the overarching development of our conceptions of love. Perhaps my largest concern is that college — and Greek life — feeds into the idea that “sex is love.” Our society and the community we all take part in for four years of our young adult life can be pervading our ideological conceptions more than we may think.

Think about it this way — the social gatherings we partake in aren’t because we are genuinely interested in getting to know one another. We do not attend them with the hopes of building that “deeper connection” with someone. We all, generally speaking, partake because we’re hoping to end the night in someone else’s bed. Essentially, we’re not looking for love and I’d dare to say, that at this point, we don’t even really care about it. Whether or not you think this is a problem or not is for you to decide. However, I am afraid that the lack of focus on having romantic relationships, or at least viewing our relationships as sexual transactions, could have repercussions later down the line when it really is time to think about love. Given the ways we are influenced while in college, it is worrying to think that many of us may take these interactions as the basis for love.